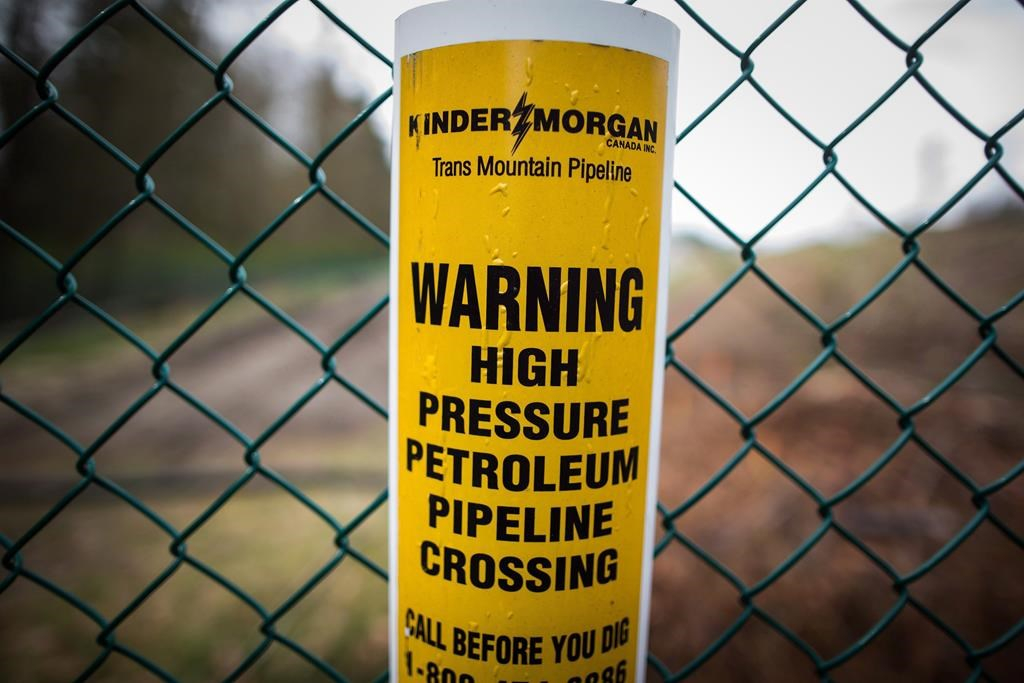 A sign warning of an underground pipeline is seen on a fence at Kinder Morgan's facility in Burnaby, B.C., on April 9, 2018. Photo by The Canadian Press / Darryl Dyck
Previous story
Next story

With just over a week remaining until the May 31 deadline set for abandoning its Trans Mountain pipeline expansion, no suitors have publicly emerged to step into builder Kinder Morgan Canada Ltd.’s shoes.

Analysts and observers say they remain perplexed by Finance Minister Bill Morneau’s comment last week that "plenty of investors would be interested in taking on this project," after the federal government said it would offer an "indemnity" or insurance to guarantee it is built.

Kinder Morgan said Monday it has nothing to add to last week’s statement from CEO Steve Kean in which he repeated the May 31 deadline and said that discussions are ongoing but "we are not yet in alignment."

It’s difficult to guess who might take Kinder Morgan’s place without knowing what guarantees or deals are being offered by the federal government and possibly the province of Alberta, said Samir Kayande, a director with RS Energy Group in Calgary.

He pointed out that the richer the deal, the longer the list of potential replacements for Kinder Morgan, which could include pension or private equity funds.

"There is still time to get something done around a guarantee of some sort that will satisfy Kinder Morgan," he said in an interview on Monday.

"It really depends on the scope of the federal and provincial guarantees that are going to be offered. The governments are in kind of a tough spot here because if anyone does step in, it’s going to take them months or longer, potentially, to ramp up the whole effort."

Delay would be 'political disaster'

The federal government has said its indemnity and suggestion of the entry of a third party gives it an advantage as it negotiates with Kinder Morgan but Dennis McConaghy, a former TransCanada Corp. executive and industry analyst, said he disagrees.

He said it would be a "political disaster" for both Morneau and Alberta Premier Rachel Notley if the pipeline in−service date is delayed beyond 2020 because both governments have staked their reputations on it being built.

"I’ve been very skeptical about the advent of third parties," said McConaghy. "This deal has to get done with Kinder if the focus is to get the pipeline in service by 2020.

"This project is essentially an expansion and a debottlenecking of an existing pipeline so it’s very difficult to build the project without selling the original Trans Mountain asset, which is of course a very complicated prospect."

He said the cost and delays involved in bringing in a third party makes it clear that the federal government’s best bet is to reach an agreement with Kinder Morgan.

Meanwhile, finance officials had no new details to report in an email received Monday.

Trans Mountain has been operating since the 1950s, carrying as much as 300,000 barrels a day of oil and refined fuels from Edmonton to the Vancouver area, where it connects with a line carrying crude to refineries in Washington state.

Enbridge denies it is negotiating

The planned tripling to 890,000 barrels a day could give Canada access to alternative markets as booming production from U.S. shale players reduces Canada’s biggest customer’s need to import northern oil.

B.C. is fighting the pipeline in the federal Court of Appeal and in B.C. Supreme Court. It has also referred to the B.C. Court of Appeal its own proposed legislation to cap oil shipments across the province.

Oilsands producer Cenovus Energy Inc., a company hit hard by oil price discounts in the first quarter and a committed shipper on the project, refused comment when asked if it is interested in buying a stake in the project.

Kinder Morgan says it has already spent $1.1 billion of estimated $7.4 billion price of the project.

Good...hopefully no one is stupid and reckless to buy into this pipedream. Let's hope it dies sooner rather than later!

Actually, western Canada oil producers can ship their crude oil through US port facilities. US firm Tethys Partners have a license to export Canadian crude oil from U.S. ports, provided it is not mixed with any US crude. In order to ensure its "purity", Canadian crude must be transported to a US port by "rail", where the crude is loaded into tankers and shipped to overseas markets.
Canadian crude oil that is pipelined to the Gulf Coast cannot be exported since pipeline operators will blend many different types of petroleum products and cannot guarantee its country of origin. Also, Canada's heavy crude oil has to be diluted to be able to go through the pipeline system.
(source: Oil Sands Magazine, June 25, 2016: " How American Companies Profit by Exporting Canadian Heavy Oil")
Despite the fact that Canadian oil producers can export their product through US port facilities, Canadian crude oil exports to countries other than the US remain at roughly 0.8% of Canada's total crude oil exports. In the third quarter of 2015, only conventional light crude oil was exported (28,550 b/d) to countries other than the US ( exports to the US were 3,045, 862 b/d).
(source: National Energy Board, 2015-Q3, Estimated Canadian Crude oil Exports by Type and Destination)

As Trans Mountain is stuck in

As Trans Mountain is stuck in a political dispute between Alberta, BC and Ottawa, investors are turning their attention to Keystone XL which has more potential to go ahead. If Keystone XL is built, it will add 830,000 b/d capacity to the existing pipeline system exiting western Canada.
According to the 2017 CAPP report on "Crude Oil Forecast, Markets and Transportation"', Enbridge Line 3 expansion will add another 370,000 b/d, which will bring the total pipeline capacity (without Trans Mountain expansion) coming out of the WCSB to 5,222,000 b/d. Western Canada oil production, which includes pentanes and condensate (estimated at 1.26 million b/d in 2030), is estimated to reach 4.93 million b/d in 2030. So there will be enough pipeline capacity to carry all the oil produced in western Canada.
Furthermore, new technologies are emerging that could make transportation crude easier. Last March, the Alberta government pledged $1 billion to support the construction of partial upgraders that would lighten oilsands bitumen just enough so it can flow through pipelines without adding diluent. Diluent, typically light condensate or synthetic crude, currently must be added to bitumen and accounts to about a 'third' of the volumes that are shipped.
(source: Toronto Star, April 11, 2018: " With or Without Trans Mountain Pipeline Expansion, Alberta Has Oil Shipping Options")
Adding to new technologies that would reduce the demand for new pipelines in the future, rail offloading terminals in western Canada has a capacity to carry around 754,000 b/d. Rail is a more expensive solution, but it gives oil producers more flexibility to deserve markets that are not connected to a pipeline system, and the cost to build that kind of infrastructure is a lot less expensive than building pipelines.
Finally, as many countries around the world are planning and actually reducing their demand for fossil fuels, the need for oil and gas infrastructure will go down. Already, many international organizations, pension funds and financial institutions have stopped or reduced dramatically their investments in fossil fuels. We only hope that our governments (provincial and federal) will follow the same path and stopped subsidizing the Canadian fossil fuel industry.