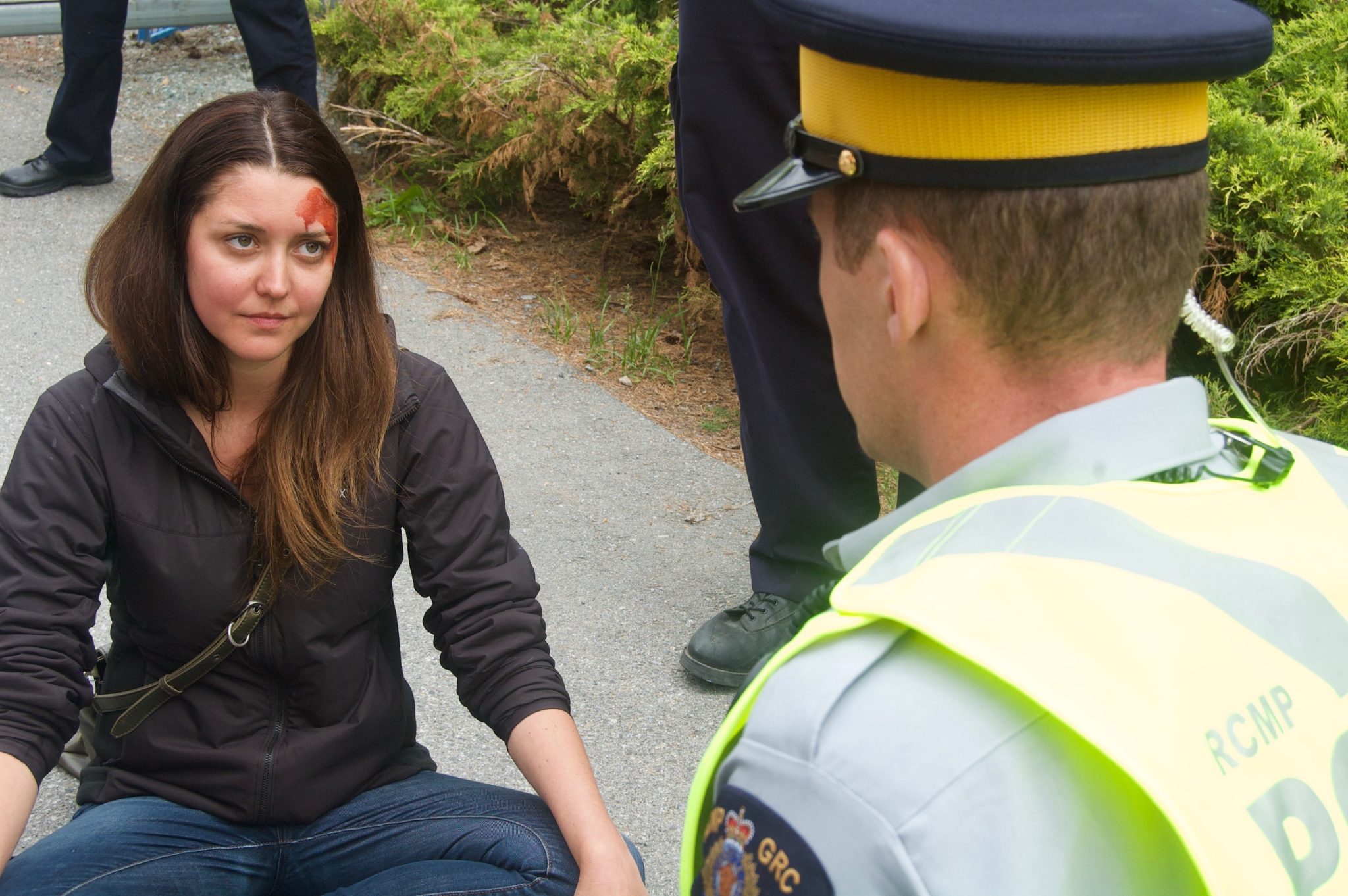 RCMP move in to arrest Anna Gerrard at a Kinder Morgan facility in Burnaby, B.C. on May 16, 2018. File photo by Dylan Sunshine Waisman
Previous story
Next story

In a statement posted on its website, Trans Mountain said the spill was contained on the property, north of Kamloops B.C., but that it decided to shut down the pipeline as a "precaution" before restarting it at 3:20 p.m., a few hours later.

"Crews are onsite and air monitoring is ongoing, with no concerns outside the pump station at this time," said the company in its statement. "An investigation confirmed a release of product from some station piping and has been contained entirely within Trans Mountain's facility. The product is a medium crude blend and no specific estimate of volume is available at this time."

The spill came days before a May 31 deadline, set by the company, to decide whether to abandon plans to expand the Trans Mountain system.

The company is secretly negotiating with the federal and Alberta governments to secure a financial deal related to plans to expand the system's capacity, up to 890,000 barrels of diluted bitumen and other petroleum products per day.

The project is backed by both Ottawa and Alberta, and also faces fierce opposition in B.C., as well as other parts of the country.

In Montreal, hundreds of Kinder Morgan opponents took to the streets on Sunday, urging the federal government not to provide a financial bailout for the Texas-based company.

Trans Mountain said it was alerted to the latest incident by its internal safety systems, describing it as an "operational disruption."

The company didn't respond to a request for comment about the incident and declined to explain further details.

In its statement, Trans Mountain also said it notified its regulators and neighbours about the incident, explaining that there would be increased vehicle activity during the cleanup.

The clean up operation includes an emergency response trailer and vacuum trucks.

A spokesman for the provincial Ministry of Environment told National Observer that a leak of about 100 litres was reported at 5 a.m. local time on Sunday, May 27, from a flow meter company alerted it to the incident early on Sunday, May 27.

The government spokesman said that the spill did not affect any water ways.

A spokesman for the National Energy Board, a federal regulator which is responsible for overseeing safety issues on the pipeline, said he was looking into the matter.

One day after the spill, the NEB tweeted on May 28 that it was "closely monitoring" the cleanup of what it described as a "small release of crude oil." It said it would continue to monitor the situation to ensure appropriate measures were taken to complete the cleanup, protect the public and the environment.

The #NEB will continue to monitor #KinderMorgan’s response to ensure appropriate measures are taken to complete the cleanup, and protect the public and #environment. #TransMountain

Trans Mountain didn't respond to a request for comment.

Kinder Morgan suspended all non-essential construction on the expansion project in April, citing obstruction by the B.C. government that put the viability of the pipeline in question.

The company wants assurances it can proceed without delays on the controversial project.

What happens to the spilled

What happens to the spilled product after it is “cleaned up”?

This talk about cleanup is a farce. We have no spare planet to dump it on and forget about.

Everything that is said about

Everything that is said about this spill MINIMIZES it! It DOESN'T MATTER how much - or little - gets spilled! ALL of it MUST remain in the ground!!

What concerns me is what kind

What concerns me is what kind of a spill this is.....I know the oil companies like to pretend that bitumen is the same as oil...but it isn't. If the press knows that its bitumen, do they still call it crude? Because from a clean up perspective, there's a world of difference.