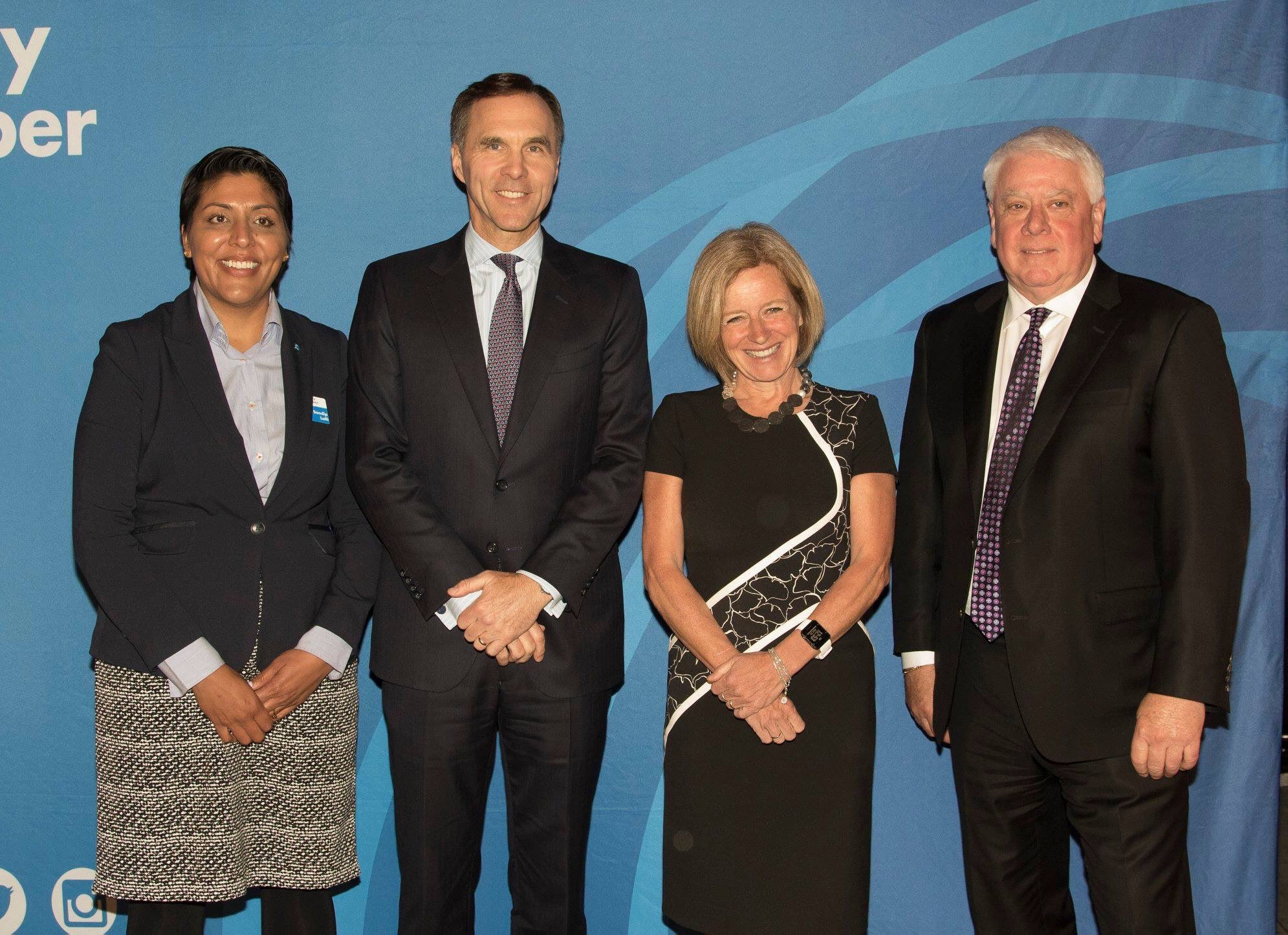 Two executives at the Canadian unit of Texas-based Kinder Morgan are poised to cash in with $1.5 million bonuses after Ottawa offered to bailout their west coast oil pipeline system and expansion project, according to a new filing with the United States Securities and Exchange Commission.

Both Kinder Morgan Canada president Ian Anderson and David Safari, the vice president of the Trans Mountain Expansion Project, stand to benefit from the deal, according to the new filing posted on Friday. The bonuses would be paid provided that they remain in their positions over the next two years.

The office of Finance Minister Bill Morneau declined to say whether he was aware of the proposed bonuses, referring questions about salary issues to Kinder Morgan.

The company defended the bonuses.

"The arrangements were reviewed and approved by the Kinder Morgan Canada board of directors and are consistent with industry practice for a project and transaction of this size," said Trans Mountain spokeswoman Ali Hounsell in an email to National Observer.

Anderson earned about $2.9 million during the second half of 2017 in salary and other benefits, according to company documents, The Narwhal reported on April 20. Safari earned $1.95 million over the same period, the B.C.-based publication reported.

The latest filing, released on Friday, explains that the company's board of directors approved the new bonuses one day before Morneau announced the deal to purchase Kinder Morgan's Canadian assets for $4.5 billion. This would also be one day before Prime Minister Justin Trudeau's cabinet approved the multibillion dollar deal that is expected to close by the end of the summer.

"On May 28, 2018, in connection with the Purchase Agreement, the Board approved awards of retention bonuses by KMCI to Ian Anderson and David Safari, each a named executive officer of the Company," said the filing. "Each officer was awarded a retention bonus of C$1,500,000, which will be payable in equal parts on July 2019 and July 2020, provided that the applicable officer remains employed by KMCI through such date."

Another section of the filing also shows that Ottawa's $4.5 billion bailout of Kinder Morgan may have saved companies operating in the Canadian oilsands about $700 million in losses that they would have been forced to absorb if the pipeline operator had abandoned its project. This would be their share of expenses to cover the existing construction expenses by Kinder Morgan, based on the agreements they signed to be shippers on the Trans Mountain expansion pipeline.

"Each officer was awarded a retention bonus of C$1,500,000, which will be payable in equal parts on July 2019 and July 2020, provided that the applicable officer remains employed by KMCI through such date," said Kinder Morgan in new SEC filings.

Morneau's office continued to defend the deal on Friday.

"As you know, we've entered into a commercial agreement with Kinder Morgan that allows for the summer construction season to proceed without delay, and protects up to 15,000 good, well-paying jobs for hard-working Canadians through construction – including 9,000 jobs in British Columbia," said Morneau's spokesman Dan Lauzon in an email to National Observer. "The agreement is in our national interest, and will bring significant benefits to Canadians."

Earlier this week, Natural Resources Minister Jim Carr also defended the agreement, telling the CBC's Early Edition in Vancouver that he thought the government got the best deal possible for Canadian taxpayers.

"There was a team of experts negotiating with Kinder Morgan for many, many weeks," Carr said, the CBC reported. "That team, before the final decision was made, had a very firm grip on the economics of the sale. That was done properly and with all of the safeguards that the Canadian people would want."

But it's not clear how much construction will actually take place this summer, or how much that would cost. The SEC filing by Kinder Morgan indicates that the company hasn't concluded its contract negotiations with construction companies, and that it needs to update its cost estimates for building the project.

The new U.S. filing also indicates that Trans Mountain has agreed to resume development activities on the expansion project "using commercial efforts including proceeding to firm up the construction contracts and prepare a revised cost estimate" for the project, while continuing to meet its conditions and apply for the required permits to proceed with construction.

The Trans Mountain expansion project has triggered fierce opposition in British Columbia from a wide range of people, including First Nations who say they were not adequately consulted about the project, communities concerned about spills, and environmentalists who have said the project would push Canada's climate change goals out of reach.

About 200 people have been arrested at the site of the project's terminal in Burnaby, B.C., where opponents have been attempting to interfere with the company's ongoing construction efforts.

Economist Robyn Allan, who has spent the past few years analyzing the Trans Mountain project, said that the Trudeau government is misrepresenting the business case for the pipeline. Trans Mountain's last estimated the project would cost about $7.4 billion, but Allan estimates that the construction costs alone would likely exceed $9 billion, not including the $4.5 billion purchase price for the assets.

Allan also questioned the claims from the government that its deal would create 15,000 jobs.

"How does this purchase create jobs? They don't even know the capital costs of this project, according to this agreement," said Allan, a former president of the Insurance Corporation of British Columbia, in an interview.

She also criticized the proposed bonuses for Anderson and Safari.

"It's a large amount of money and it's something that most people are going to be shocked about," Allan added.

Thanks for the great piece,

Thanks for the great piece, Mike!

The following is all "cut and paste” - but some powerful arguments against this deal of desperation by Trudeau and Notley. Don’t miss David Hughes’ report (below). This guy really knows his stuff!

It seems that the Kinder Morgan board and shareholders are delighted with the deal!

….and here’s another group of recent divest-ors who are happy to be free:
(With thanks to Patrick DeRochie of Environmental Defence)
Statoil. In December 2016, Norway’s Statoil sold all of its tar sands assets at a loss and exited Western Canada altogether, due to low oil prices, domestic pressure from Norwegians, and an “energy market (that) has changed since (2007) quite considerably.”
Koch Industries. Just days after Statoil left the tar sands, Koch Industries, owned by the infamous climate-denial-funding Koch brothers, ended plans to build its proposed Muskwa tar sands project west of Fort McMurray.
Imperial Oil. In January 2017, Imperial Oil, the Canadian subsidiary of ExxonMobil, announced it would “write down” 2.8 billion barrels of its bitumen reserves in Alberta. This was the company acknowledging that the tar sands oil could not be economically produced under prevailing low energy prices.
ConocoPhillips. In February 2017, American oil giant ConocoPhillips was forced to admit that 2 billion barrels of its previously “proven” tar sands reserves might have to stay in the ground. ConocoPhillips also suggested low global oil prices made the reserves uneconomical to produce.
ExxonMobil. Also in February 2017, the United States’ largest oil company, ExxonMobil, announced that it can no longer profitably develop up to 3.6 billion barrels of its tar sands reserves unless oil prices rise. That’s 3.6 billion barrels of oil that could be left in the ground.
Marathon Oil. On the same day as Shell’s tar sands divestment, Houston-based Marathon Oil signed a deal to sell its Canadian tar sands operations in an effort to cut the highest-cost assets from its portfolio.
Royal Dutch Shell. The Marathon divestment was drowned out by the bigger news of Shell selling off all of its tar sands assets for $7.25 billion. The oil giant’s CEO said that the tar sands “are no longer a strategic fit for Shell.”
Shell’s huge sell-off of its tar sands assets was complemented by a commitment to invest $1 billion per year in renewable energy by 2020. It was also accompanied by a warning from Shell’s CEO, Ben van Beurden, that public faith in the oil industry was “just disappearing”. He went on to say that government regulations could render oil and gas reserves “economically infeasible” to exploit. Meanwhile, the CEO of Statoil, which divested its tar sands assets in December 2016, said on the same day that “the low-carbon future will reshape the energy space.”
The world’s largest oil companies are finally starting to see the writing on the wall. The world is flooded with cheap oil that can’t be burned as we ramp up global climate action. The oil industry’s business model is becoming obsolete and the first casualties will be high-cost, high-carbon sources like tar sands oil that can’t compete in a world of low prices and declining demand.

The oil sands are no bonanza!

Notwithstanding the unacceptable environmental risk of a catastrophic spill, it is becoming clear that, in the longer run, future development will be economically risky...and make it impossible to meet our obligations under the Paris Accord.

a) With 97% of Canada’s remaining oil reserves, the oil sands offer the only hope for substantially increasing Canadian oil production. But this is a low-quality unconventional resource that requires large energy inputs to extract, with resultant large emissions compared to conventional oil (well-to-tank emissions for diesel fuel are 89% higher for oil sands than Canadian conventional oil).

b) Raw bitumen extracted from in situ oil sands has a mean energy return on energy investment (EROI) of about 4:1 versus about 8:1 for surface mineable resources. This compares to an EROI of greater than 10:1 for most conventional oil. Although only 20% of oil sands reserves are shallow enough to be surface mineable, they constitute 89% of the oil sands reserves currently under active development. As production from in situ extraction grows relative to surface mining, net energy will decline and average emissions per barrel will increase.

c) Who can see what the future has in store for dilbit? ….do we have any fixed contracts with Asian buyers? Can we predict the cost (or even availability) of the essential diluent? Take a look at the decline rates of the Bakken and Eagle Ford plays - where much of the diluent is produced: https://www.investing.com/analysis/shale-oil-production-suffers-massive-...

d) Do we know when we can expect the onset of Peak Demand for oil?
https://oilprice.com/Energy/Energy-General/EVs-Could-Erase-7-Million-Bpd...

As a private investor, one would have to be nuts to buy this one.

Thanks to Pete Kirby for this

Thanks to Pete Kirby for this update below. It is amazing how the oil and gas industry hides the truth from people....and how their propaganda machines keep us thinking they are the road to economic prosperity, when the truth is quite a bit darker. The road to climate catastrophe is paved with asphalt....and its close cousin, tarsands junk from Fort MacMurray!

Wow! Thanks Mike De Souza for this article and thanks Pete Kirby for the shocking info below. Who in the world is advising Trudeau (the drama teacher) on this file!!!

STUPID LIBTURDS /DUMMIES THE COMPANY WAS WORTH $500, MILLION MAX BUT LIBTURDS CANT COUNT