Last weekend, there were 170 fires burning across B.C., 10 times more than the same time last year.

But officials say it's still impossible to predict how 2018’s wildfire season will play out, and whether the province will find itself in a state of emergency again this year.

With climate change, including hotter, dryer summers, wildfires are expected to increase in intensity and frequency across Canada.

Last year, wildfires put B.C. in a state of emergency for 10 weeks. Thousands of people were forced through their homes, and more than 190 houses were destroyed. More than $568 million was spent trying to control more than 1,346 fires covering 1.2 million hectares.

To prevent another disastrous summer, the B.C. government appointed former Liberal politician George Abbott, who served in Cabinet in several ministries, and Maureen Chapman, hereditary chief of the Sq’ewá:lxw (Skawahlook) First Nation, to conduct an external review into 2017’s floods and wildfires.

The $900,000 review is now complete and so is a 148-page report — Addressing the New Normal: 21st Century Disaster Management in British Columbia.

Some of the report's 108 recommendations are already underway, but nothing can control the weather.

Last week, there were 48,000 lightning strikes over two days, sparking 240 new fires across the province, Skrepnek said. Most of those, fortunately, were smaller fires that were quite easily brought under control.

Last year’s major fires were triggered by a lightning storm July 6 to 8, when hundreds of fires started.

This year, the province had a particularly dry May, but June has seen some rainfall. In 2017, the month of May was wet, but June was bone dry.

“The rain that we get in June is really crucial to how summer plays out,” Skrepnek said. “If we have a fairly wet June, we tend to have a slow, steady fire season. If we don’t get that wet June, that’s when it can get quite volatile.” 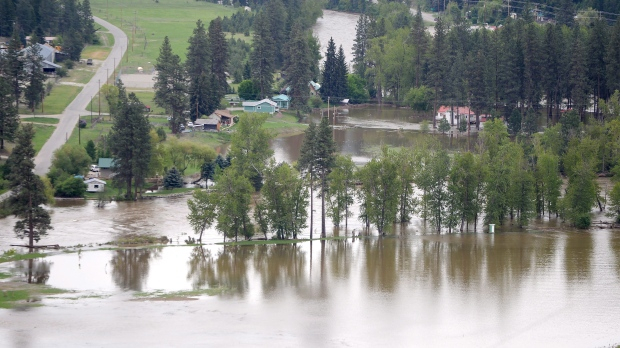 "Last summer could be a "new normal our province and planet now face due to the unpredictable and increasingly volatile impacts of climate change,” Abbott and Chapman say in the report.

From 1900 to 2013, B.C.’s average temperature has increased faster than the global average, their report says.

“Scientists predict that the province will face increases in extreme weather, rising sea levels, increasing risk of wildfire and flooding, as well as a change in the location of ecosystems and species that live there,” Abbott and Chapman write in the report.

The jury is out on whether climate change means more lightning strikes. Some research in the United States says lightning will increase with climate change, while other research says it will be less frequent. Environment and Climate Change Canada says it has been collecting lightning data since 2002, but has no information on a correlation between lightning frequency and climate change.

“With only 15 years of data, we are unable to establish any trends especially given the high variability of lightning,” Environment Canada spokesperson Jenn Geary said in an emailed statement. “For example, the annual number of lightning strikes in Canada has varied from 1.6 million in 2017 to 2.7 million in 2005.”

The wildfire severity forecast for July and August is well above average, according to the Canadian Wildland Fire Information System.

Environment Canada is also calling for a warmer than normal summer, Skrepnek said.

“I think we can put that in the bank that it’s going to be fairly warm, but rain is just such an X-factor,” Skrepnek said. “You can have a fairly warm summer or even a hot summer, but if you catch a little bit of rain every four or five days, that’s going to keep the fire situation in check.”

B.C.’s Forests Minister Doug Donaldson said in May that the province had already started working on some of the report's recommendations, which fall into four key themes: partnerships and participation, knowledge and tools, communication and awareness, and investment.

He would not commit to implementing them all, but said the government needs time to analyze the findings and create priorities. An action plan will be created by Oct. 31, Donaldson said. He called for an across-government approach, in partnership with industry.

Better partnerships with Indigeneous people, improved communication with small towns and a greater focus on prevention and preparedness were strategic shifts suggested in the report.

Since the report's release, the Ministry has begun work with the Union of BC Municipalities, the First Nations Emergency Services Society and the Forest Enhancement Society, Donaldson said.

"(This group will transition) the existing Strategic Wildfire Prevention Initiative to a new Community Resiliency Investment Program to fund a broader suite of eligible activities," Donaldson said. "As part of Budget 2018, the ministry has set aside $50 million over three years for this new program."

Abbott and Chapman found that less than 10 per cent of high risk forests in areas where communities meet the forest has been treated in the 15 years since the release of the Filmon report — called Firestorm 2003 — in 2003, after the massive Kelowna fire.

And the problems in those areas are going to grow, as the small towns get bigger.

“Solutions will be neither easy nor inexpensive, but in the absence of substantial  new investment we can expect that the costs of wildfire suppression, and losses to citizens and the provincial economy, will continue to grow,” Abbott and Chapman write in the report.

The province is already taking a more active approach on prescribed burning — a practice that removes fuels from wildland — Donaldson said. Some communities have also come to him with ideas on how to mitigate fire risk that are less “cost prohibitive” than what was recommended in the Filmon report, he said.

Tsilqot’in agreement will be the first of many, forests minister said.

One of the recommendations that the province has already started working on is to “establish Indigenous peoples as true partners and leaders in emergency management.”

In April, the federal government, the B.C. government and the Tsilhqot’in Nation near Williams Lake announced a new agreement to collaborate during emergencies.

Now, they have formalized an agreement with the federal and provincial governments to do just that — the first agreement of its kind in Canada.

“Where I live, people are out on the land consistently and they also know from their elders the different historical patterns with fires and the natural cycles in wildlife and other ecosystem cycles. That’s reflected in how we’re going to approach this in the future,” Donaldson said.

Citizens, including First Nations, ranchers, farmers, logging contractors and others, worked without official direction to limit the spread of wildfires, Abbott and Chapman found.

“In numerous cases, this intervention prevented small wildfires from becoming very large fires,” the report says. “During a disaster, we believe that enhanced, on-the-ground partnerships could prove extraordinarily valuable in a range of emergency events.”

The B.C. Wildfire Service has hired a new director to oversee partnerships, both with First Nations and other people and organizations, and has beefed up its communications staffing, Skrepnek said.

“It’s fair to say that there is definitely a commitment that we need to be constantly improving what we’re doing, and a year like last year can definitely shine a light there,” Shrepnek said.

“We’ve already been a lot more proactive this year, not just with First Nations, but also with groups like the Cattlemen’s Association, … and other agencies like the Fire Chiefs’ Association and the forest industry.”

Prevention plans for 90 per cent of the province outlined in the 2003 Filmon report went mostly unheeded — the province must not allow that to happen again. The 2018 report has already sparked some positive changes, but follow through is crucial to prevent cataclysmic fires in a future world of extreme and volatile climate conditions.

"The jury is out on whether

"The jury is out on whether climate change means more lighting strikes".
Here's what an extended study published by the National Resources Canada Research Press, "Anticipating the Consequences of Climate Change For Canada's Boreal Forest Ecosystems", published in 2013 says about the relation between a warmer climate and lighting strikes.
Section 4.1 Disturbances: " Until recently, linking extreme weather events and apparent increases in their occurrence to the observed warming trend has been approached with caution by climate scientists. However, mounting evidence of increased frequency and intensity (globally as well as locally) is beginning to change the thinking on this critical question.
Thanks to extensive research investments in past decades, much is known about the causes of wildfires in Canada's boreal zone and how these are coupled to climatic drivers. Increased fire occurrence in a warmer, generally drier, but more storm-laden climate is inevitable (section 3.5)."
Section 3.5 Forest fires: "Many studies have addressed the impacts of climate change on fire weather and forest fire behaviour in Canada... Change in the frequency or magnitude of extreme events could be particularly significant for forest activity in Canada... Climate warming is also expected to make the average fire season in Canada...Clearly, the effects of climate change on fire occurrence and area burned must be viewed in a spatially dependent context...
While humans cause just over half the wildfires occurring in Canada, "Stocks et al. (2002)" established that most of the area burned in the boreal zone results from lightning ignitions, which are often associated with convective storm events...
Overall, across Canada, the results from the Canadian GCM (General Circulation Model) suggest an increase in fire occurrence of 75% by 2100, whereas those from the Hadley GCM suggest increases of 140%."