Canada seeks intensive NAFTA talks, even if Trump's in no rush to sign 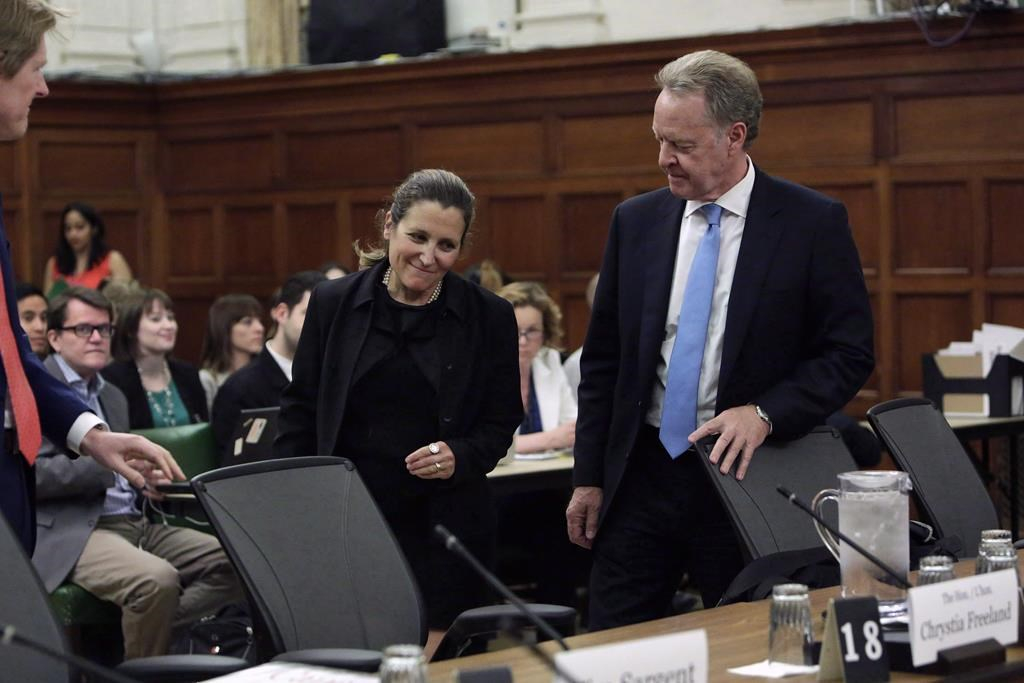 The federal Liberal government is determined to rekindle intensive talks on a new continental trade pact this summer — even though President Donald Trump says he won't sign a renegotiated NAFTA until after the U.S. midterm elections this fall.

Now that Mexico's presidential election is done, Ottawa wants negotiations on the North America Free Trade Agreement to restart as soon as possible, one government official familiar with the plan said on condition of anonymity.

"Our priority has always been to conclude a mutually beneficial agreement as quickly as possible and that, I think, remains our goal," said the official, who was not authorized to discuss the matter publicly.

"That's what we're going to stay focused on. We'll see where it goes."

That effort is expected to intensify following Monday's election win by Andres Manuel Lopez Obrador, who has already said he supports the continued renegotiation of NAFTA and wants his own team of experts to be part of the talks before he takes office Dec. 1.

Until Lopez Obrador is sworn in, members of the current Mexican administration will continue to serve as the country's lead NAFTA negotiators, the official said.

Trump, however, has said he wants to wait until after November's U.S. congressional midterms before committing to a new agreement.

In an interview that aired Sunday on Fox News, Trump said he could quickly sign a revised NAFTA with Canada and Mexico, but instead wants to land a better deal for the U.S. Asked about the timing of an agreement, Trump said: "I want to wait until after the election."

Trump has also indicated repeatedly he'd be open to striking separate agreements with Canada and Mexico.

A fresh round of talks on the three-country pact will come with Canada and the U.S. locked in an unprecedented, cross-border trade fight. The neighbours have already swapped punitive tariffs on some imports — and there are fears things could get worse.

On Sunday, Ottawa responded to the Trump administration's tariffs on Canadian steel and aluminum with duties of its own against U.S. imports — dollar-for-dollar, reciprocal tariffs that target steel and aluminum, as well as a long list of consumer goods, the government says.

Trump himself has already threatened to go even further by putting tariffs on the auto sector, which could prove far more damaging for the Canadian economy than the steel and aluminum duties.

That tariff fight will form a rather tense backdrop for the effort to reach a NAFTA deal, which Foreign Affairs Minister Chrystia Freeland has said she expects to ramp up soon, following several conversations last week with U.S. Trade Representative Robert Lighthizer.

On Monday, Prime Minister Justin Trudeau spoke with Lopez Obrador by phone. The two discussed "mutually beneficial economic and trading relationship between the two countries, and their shared priority of updating the North American Free Trade Agreement for the betterment of their peoples," Trudeau's office said in a statement.

"We've been very nice to Canada for many years and they've taken advantage of that, particularly advantage of our farmers," she said.

Trump told Fox about proposing to his G7 partners during last month's summit in Quebec that all seven countries remove all trade-related barriers and taxes.

"Do you know what happened? Everybody said, 'Uh, can we get on to another subject?'"

Trudeau has insisted the U.S. president's complaints about Canada's trade barriers are the result of Canada's refusal to give in to Trump's demands to do away with the country's supply-management system, which is designed to protect dairy, poultry and egg producers.

Both Mexico's election and the congressional midterms had been billed as major wrinkles for the talks. But as the timelines drag on, Canada's own trip to the polls — currently scheduled for October 2019 — is becoming one of the biggest "wild cards," said Ohio-based trade lawyer Dan Ujczo.

Once automotive issues are addressed, the remaining NAFTA sticking points will largely be between Canada and the U.S. — and it's an open question how much room Trudeau will have to manoeuvre Trudeau in areas like government procurement, supply management and intellectual property.

"Who would've thought that at the start of negotiations that the flexibility of Canada could be the most significant driver as to whether or not we get a NAFTA deal?"

Progress made in modernizing NAFTA will make it easier to trade, says Freeland