Dozens of scientists from over 20 countries explain how mining, logging and fossil fuels disrupt the water on earth 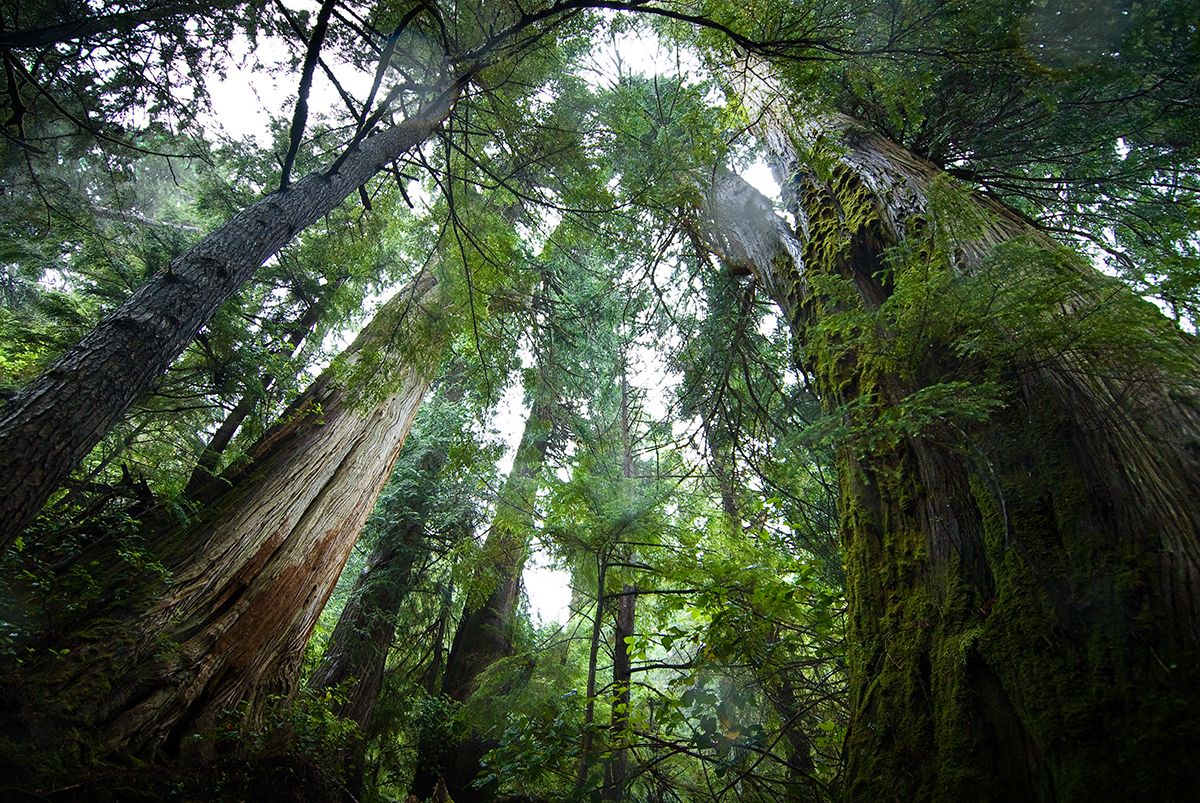 Canadian government departments should work closer together to determine how the interaction of forests and water is being disrupted by fossil fuel extraction, mining and logging, says a Canadian scientist at the centre of a new report presented to the United Nations.

Irena Creed, a Canadian biology professor and executive director of the School of Environment and Sustainability at the University of Saskatchewan, co-chaired a 19-member panel that compiled evidence showing how the health of the planet’s forests is intricately tied to the safeguarding of sustainable access to water.

The July 10 report by the Global Forest Expert Panel on Forests and Water — a major collaboration of 50 scientists from more than 20 countries including 11 different Canada-based contributors — highlights cutting-edge research demonstrating a whole different way of managing the Earth's ecosystems.

“Our way of looking at forests has often been that they are the source of plentiful, clean, water supplies that are provided downstream,” said Creed, in an interview July 12.

“There’s an emerging scientific body of evidence that is starting to suggest that it’s not just what happens when the raindrop falls to the ground...but that the forests produce water,” she said.

“Through that transpiration, moving from the roots up though the leaves and into the atmosphere, that atmospheric water is then transported downwind.”

The downwind transport means that prevailing winds across Central Canada, for example, might be providing water to Ontario and Quebec, Creed said. “That kind of atmospheric connection has never really been considered when we talk about the management of forests for water.”

The report was presented on July 11 to the UN's 2018 High-Level Political Forum, by the non-profit International Union of Forest Research Organizations, a network of forest scientists, and Austria's diplomatic mission to the UN.

"More than seven billion humans currently on this planet share it with approximately three trillion trees. Both humans and trees need water," reads a press release about the report.

"Forests’ role in the water cycle is at least as important as their role in the carbon cycle in the face of climate change. In addition to being the lungs of the planet, they also act as kidneys."

“There’s an emerging scientific body of evidence that is starting to suggest that it’s not just what happens when the raindrop falls to the ground...but that the forests produce water,” says Canadian scientist Irena Creed. #cdnpoli #cdnsci

The expert panel was launched by the Collaborative Partnership on Forests, a voluntary organization of 14 UN, international and regional bodies. The panel was formed in order to compile the scientific evidence of the interactive effects of forests, water and the climate.

There are already major risks to Canada’s vast boreal forest and freshwater. Canadian government scientists have already determined large portions of boreal forest could be at risk of dying off by the end of the century, as climate change will dramatically aggravate the risk of wildfires, drought and insect infestations.

Even by mid-century, parts of Canada’s 270-million hectares of boreal that purifies water and air, regulates the climate and stores carbon will already be at heightened risk of devastating fires, that study showed.

“Right now, we need to look at cumulative effects of both climate change, as well as the ongoing natural resource extraction activities that are happening in the boreal,” said Creed, “to try to look at how best to manage for that (forest-water) coupled system.”

Oil and gas extraction, logging and mining all has an impact on the connection between forests and water, she said. Canada should examine how much resource extraction should be halted in order to ensure the ecosystem’s forest-water balance isn’t disrupted.

As climate change accelerates changes to the environment, it brings with it increased risk to the water supply, including water quality.

“That ongoing activity is important for Canada’s economy, but that ongoing activity in the face of increasing risk of wildfires, or infestations, or air pollution, creates a great deal of uncertainty in terms of how our economy can rely on these resources that are extracted from the boreal forest,” said Creed.

“It’s also important to consider the quality of water, if you think about many communities that live in the boreal forest, the two-thirds of Indigenous communities in Canada that don’t have access to clean, reliable sources of drinking water.”

The report is meant to inform the ongoing discussions about how to implement the UN’s Sustainable Development Goals (SDGs), which aims to end global poverty by 2030 by pursuing 17 objectives on everything from climate change to gender equality.

Forests are often left out of high-level climate or water discussions, said Creed, and this includes the way the SDGs have been approached.

“People are viewing them (the SDGs) individually and independent of each other,” said Creed, “and one of the main messages that we have is that we can’t do that.”

Successfully achieving the goals means looking just as much at how they interact, she said, in particular the goals associated with land, water and climate.

A July 10 assessment by the non-profit Sustainable Development Solutions Network, with offices in New York, Paris and New Delhi, and the German independent institution Bertelsmann Stiftung, shows Canada ranked 20th among 156 countries in addressing the goals. Sweden was ranked first.

'Cross-fertilization of ideas' between federal bodies

Xiaohua (Adam) Wei, a professor of forest hydrology at the University of British Columbia's Department of Earth, Environmental and Geographic Sciences and one of the lead authors for several of the chapters, said the report sends several clear messages.

The report shows that “protecting forests means protecting water resources, as forested watersheds are the source of our water supply,” he said in emailed comments.

As well, he said “protecting and managing forest-water relationships require a systems and dynamic perspective, with consideration of various spatial and time scales.” The right policy has to be in place to manage the relationship between forests and water, he added.

The expert panel started work in early 2017, combing through the scientific literature on interactions between forests and water. As the co-chair, Creed prepared the policy brief associated with the report, and administered the report’s preparation like designing the chapters.

She wouldn’t go as far as to suggest that the two departments should be merged, as they both play important and distinct roles. The report didn’t look specifically at the collaboration between Canadian government departments, as it was meant to be a global assessment.

In addition to Creed and Wei, the report also has a considerable amount of contributions from scientists and researchers at Canadian institutions.

The report’s funding was provided by Finland’s ministry of foreign affairs, the United States Forest Service, the Austrian Federal Ministry of Sustainability and Tourism and the World Bank Group.

Could there be more reasons

Could there be more reasons to support existing forests and plant trees? Oxygen and water - what a gift and blessing trees are!

In Canada, an average of more

In Canada, an average of more than 2 million hectares of forest burn each year. This is twice the average area burned in the early 1970's, and various modelling scenarios predict another doubling or more by the end of this century, because of warmer temperatures expected as a result of climate change.
In 2015, total "net emissions" of carbon dioxide equivalent (CO2 e) from Canada's managed forest (226 million hectares, or 65% of Canada's total forest area) were about 221 million tonnes (Mt). In 2015, Canada's total GHG emissions reached 714 Mt. Emissions from Canada's managed forest are not accounted in Canada's annual "National Inventory Report on Greenhouse Gas Sources and Sinks", despite the fact that Canada as a party to the United Nations Framework Convention on Climate Change (UNFCCC) must report annually on greenhouse gas emissions from the managed forest.
(source: Natural Resources Canada, Sept 28, 2017: "Indicator: Forest carbon emissions and removals")
Peat fires are considered to be of major concern in the scientific community studying the effects of forest fires in the boreal forest area. It is estimated that peatland ecosystems around the world contain around 30% of the world's terrestrial carbon, and about 64% of the estimated total global boreal forest carbon.
(source: Natural Resources Canada, Dec 04, 2013: "Peatland fires and carbon emissions).
In Canada, most peatlands occur in the Boreal Peatland Region (64%) and Subarctic Peatland region (33%). 59% of all stored carbon in Canada is contained in these peatlands. These two regions contain approximatively 142.94 billion tonnes (Gt) of the soil organic carbon occurring in Canadian peatlands. The peatland sensitivity model indicates that around 52% (74.16 Gt) of that organic carbon will be " severely" to "extremely severely" affected by climate change.
(source: Agriculture and Agri-Food Canada, Charles Tarnocai, May 2009: "The Impact of Climate Change on Canadian Peatlands")
Warming temperatures in northern Canada not only affect forest and peatland ecosystems. Indications are that thawing permafrost at northern latitudes, and the resulting microbial decomposition of huge stores of previously frozen organic carbon (around 277 Gt), will be one of the most significant potential feedbacks from terrestrial ecosystems to the atmosphere in a changing climate. These lags and thresholds could lead to sudden and significant responses to climate change.
Despite the enormity of the problem emerging from these studies, emissions from forest and peat fires are currently not considered in Canada's carbon budget modelling and GHG accounting system. Researchers across Canada continue to explore the interactions of fire, permafrost, and peatlands and their effects on northern Canada carbon balance. Politicians should pay attention. This is a "carbon bomb" about to explode.

Thank you for this. I am

Thank you for this. I am always amazed by how much knowledge is contributed by the comments to National Observer articles. The full reality of what we are facing, and the degree to which even well informed people choose to ignore parts of it, fudge the data.....or just concern themselves with changes in their own back yard, is overwhelming.

We say 'we are all in this together'. But that is just a cliche, until we actually start connecting the dots and are able to add to that nostrum the understanding that everything in the natural world is interconnected, complex, and designed to guarantee that everything keeps working well.

In the anthropocene, we also have to see ourselves as one small part of this complexity. We don't improve on the natural systems with our extractivist technologies, and we won't be able to 'mitigate' what we've done to disrupt them. Its time to consider living within the natural constraints of our living ecosystems.

I'm not holding my breath.

Thanks Carl. I just posted

Thanks Carl. I just posted your article on Facebook. Thanks for including the group's recommendation that our government groups should share info for the good of all.