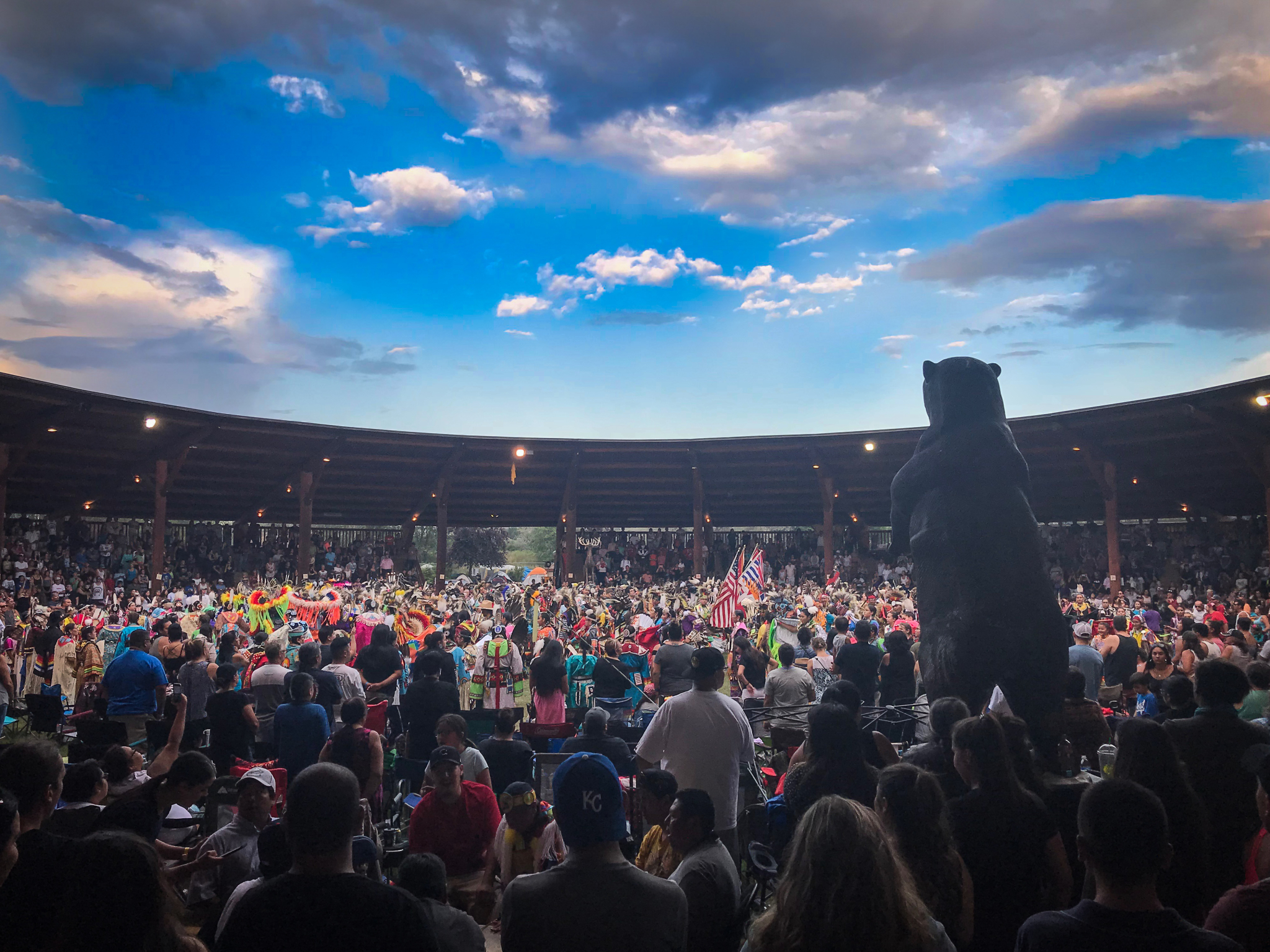 About a 1,000 people gather for the Kamloopa Powwow, Aug 3-4, 2018, in interior British Columbia. Photo by Emilee Gilpin
Previous story
Next story

Last Friday, I made the drive from Vancouver, northeast to Secwepemc territory, known as Kamloops, B.C., to check out one of the biggest powwows in North America. Moving from the pacific coast to the interior of B.C., the landscape and light shifted as a soft breeze became a thick blanket of heat. Five hours later, I heard the commotion, saw the lights and landed on an entire tent city — here was the Kamloopa powwow.

For some Indigenous peoples, summer means powwows, sundances, potlatches and canoe journeys. It is a time for hunting, feasting, fasting and fishing — a season for story, travel, trade, and sun-lit celebrations that remind the world of the strength and beauty of Indigenous Nations.

There were hundreds of tents of all sizes, vehicles, RVs, and tepees camped across the Tk'emlups te Secwepemc powwow grounds beside the South Thompson River in Kamloops, British Columbia. People traveled from far and wide for the well-loved powwow — a chance to win big money, camp out, meet family and friends, compete, sing, drum, dance, and bear witness.

Around a thousand dancers and many more spectators traveled to the land of the Shuswap for the long weekend. Bright regalia — skirts, shawls and headdresses — hung off the backs of trucks. Proud pre-contact-looking prairie dancers — men, women, teens and tots — ran about, braided slicked-back long hair into perfect plaits, secured final touches and rushed to a giant sky-lit arbour made just for these kinds of events.

The first night of the weekend's competitions lasted to midnight. The soul-filled screams of the powwow singers and the heavy heartbeat of the drums quieted, amplifying the communal singing involved in the bone games Lahal/Slahal, lulling children to sleep. A breezy night eventually became a coffee and frybread-filled morning and soon enough the heat had sleep-deprived bodies running to the Thomspon River for relief.

People of all colour and creed were in attendance, though dominated by powwow families and competition participants, visitors from other cultures and countries toured about, happy to have found themselves at the event.

Dancers enter the arbor as their category is called until eventually it is filled. August 4, 2018. Video, Emilee Gilpin

The first peoples of Turtle Island have always used song and dance to share stories.

Indigenous peoples — whether one of the many First Nations, Inuit or Métis, practice diverse rich cultures, sophisticated forms of governance and economic trade relations and have been doing so since time immemorial. Though powwows were traditionally smaller more private ceremonial events, they've adapted over time and in today’s contemporary society, powwows are a cultural and social celebration most often open to the public.

Though one might very easily attend a powwow and miss the majority of the stories being told and traditions upheld, powwow experts (namely the matriarchs and aunties in attendance) can lay out the minute details of the day's events. They'll tell you about traditional footwork and diversity of dress. They'll tell you which dancers tests the limits with new steps and styles and what regions each dancer and design originates. The ones who grew up in powwow culture know the protocol like their own relatives, they are the backbone of the annual events and make sure it runs as it should. And they'll certainly tell you to stick around Saturday night for the spotlight specials.

The crowd buzzed with energy Saturday night. There were so many traditional dancers, the men and women came out in two large groups. Only eight were chosen from the first and another eight from the second. The final sixteen dancers turned to face the crowd when the song finished, waiting to see whether they'd be one of the top four chosen from the group.

The lights of the giant arbour shut off and four spotlights shone on the grounds. The final four danced their hearts out, hoping to take home the first-place prize.

Sunday, Red Crow welcomed non-Indigenous spectators to enter into the ‘Caucasian Classic,’ where they tried out their own interpretation of powwow dancing. Participants filled the arbour (some were carried into the opening by the hosts), given special nicknames by the MCs and danced, ran, laughed and flailed about, trying to imitate the intricate talent they had witnessed all weekend long. After a few songs and elimination rounds, a young Sami man visiting from Norway accepted his $300 price for coming in first place as the crowds applauded, cheered and screamed with laughter.

It was just another powwow on a Turtle Island summer long weekend, but it was more.

As I looked down on the countless family-filled tents, dodging children with smiles bigger than a plate full of frybread, I thought about the ways in which Indigenous people were segregated, separated and made invisible for the past seven generations. I thought about how these very cultural, social and ceremonial events were made illegal and the ways in which communities took them underground, protected them and project and embody them today. Looking at the old Kamloops Residential School (1893-1977), now the Secwepemc Museum & Heritage Park (1982-2018) which sits forebodingly above the powwow grounds, I felt reverence and hope.

"We have always been here. We are still here," unified voices seem to say all weekend long, "and we're not going anywhere."