Children born to spies in Canada should not be handed citizenship: Ottawa 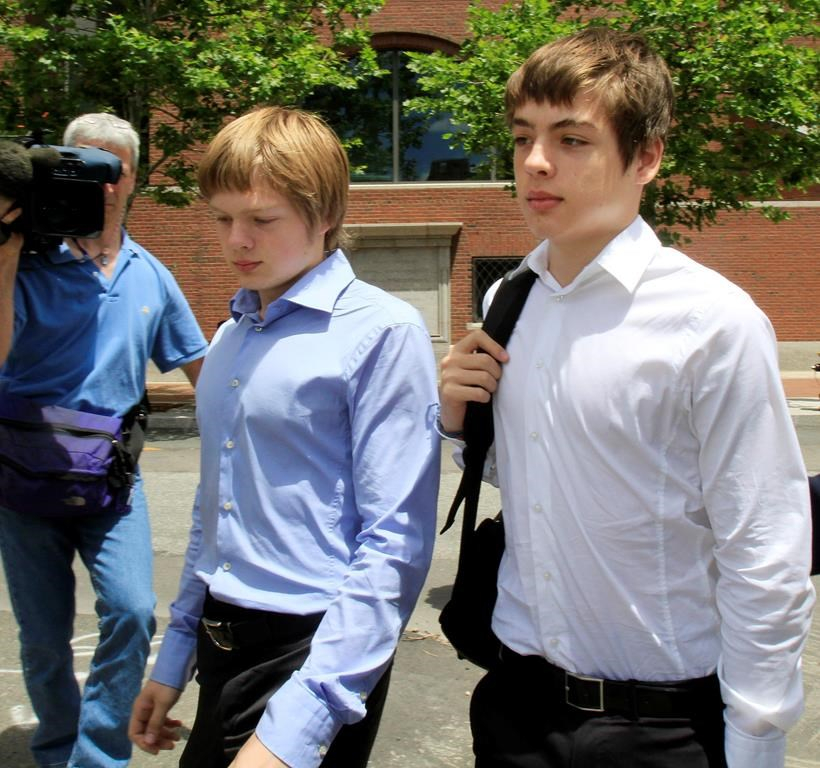 Tim Foley, 20, left, and his brother Alexander leave federal court after a bail hearing for their parents, Donald Heathfield and Tracey Lee Ann Foley, in Boston on Thursday, July 1, 2010. File photo by The Associated Press/Elise Amendola
Previous story
Next story

Russian spies lurking in the Canadian shadows may toil in secret, but they're still employees of Moscow — and therefore their children are not Canadian citizens, the federal government is telling the Supreme Court.

In a newly filed court submission, the government argues the Toronto-born son of Russian intelligence agents should be denied Canadian citizenship, the same exception that applies to any child born in Canada to a foreign diplomat.

Ottawa is fighting a Federal Court of Appeal ruling that effectively affirmed the Canadian citizenship of Alexander Vavilov and, through a related case, his older brother.

Alexander, 24, and Timothy, 28, were born in Canada to parents using the aliases Donald Heathfield and Tracey Ann Foley.

The parents were arrested eight years ago in the United States and indicted on charges of conspiring to act as secret agents on behalf of Russia's SVR, a successor to the notorious Soviet KGB.

Heathfield and Foley admitted to being Andrey Bezrukov and Elena Vavilova. They were sent back to Moscow as part of a swap for prisoners in Russia.

Alexander, who finished high school in Russia, changed his surname to Vavilov on the advice of Canadian officials in a bid to obtain a Canadian passport.

But he ran into a snag at the passport office and in August 2014 the citizenship registrar said the government no longer recognized him as a Canadian citizen.

The registrar said his parents were employees of a foreign government at the time of his birth, making him ineligible for citizenship.

The Federal Court of Canada upheld the decision.

But in June 2017, the appeal court set aside the ruling and quashed the registrar's decision. It said the provision of the Citizenship Act the registrar cited should not apply because the parents did not have diplomatic privileges or immunities while in Canada.

On the strength of the ruling, Alexander has since been able to renew his Canadian passport and he hopes to live and work in Canada — calling his relationship with the country a cornerstone of his identity.

Although it involves the same central issue, Timothy's case proceeded separately through the courts. In a decision earlier this year, the Federal Court said the ruling on Alexander equally applies to Timothy, making him "a citizen."

The registrar's original conclusion to the contrary was "logical and justified," the government argues in its submission to the high court.

The parents' purpose for being in Canada was akin to that of other employees of a foreign government: "they were dedicated to serving their home country, except in their case, the employment was carried out clandestinely.

"The broadly worded formulation of the provision seeks to treat the children of all employees in Canada of foreign governments in the same fashion, regardless of whether they are the children of diplomats, consular officials or spies," the submission says.

"The registrar's interpretation was reasonable and no convincing analysis has been put forward to show that it was unreasonable. The decision was justified, transparent and intelligible."

The Supreme Court is expected to hear the case in early December in tandem with appeals by Bell Canada and the National Football League over whether Canadian viewers can watch American TV commercials during the Super Bowl game.

The disparate topics pose common questions about the nature and scope of judicial review of administrative actions.

In its submission on the Vavilov case, the government argues the courts should take "a deferential approach" when reviewing administrative decisions like that of the registrar of citizenship, with only "very limited exceptions."

Alexander Vavilov has not yet submitted arguments to the court.

Lawyer Hadayt Nazami, who represents the brothers, has said the federal rationale leads down an "absurd and purposeless" path and that accepting the government's position "would result in uncertainty about an individual's fundamental right to citizenship."