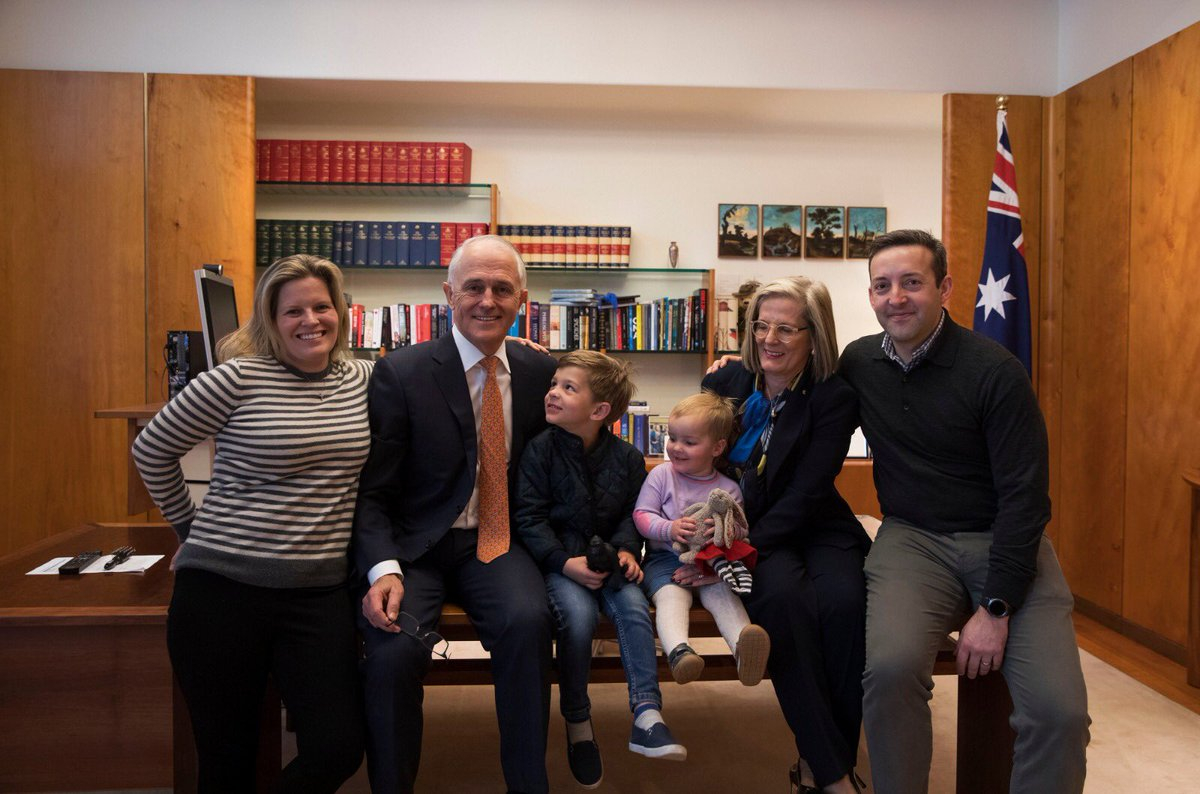 Photo of former Australian prime minister Malcolm Turnbull, who was replaced by Scott Morrison on Thursday after facing opposition from his party for trying to targets for the reduction of greenhouse gas emissions. Photo from Turnbull's twitter account.
Previous story
Next story

Among the many reasons Americans love Australia, the main one is that even though there is no language barrier, it’s so intensely… foreign. They don’t really get it. Fair enough. There’s that whole parliamentary thing, cute but disgruntled marsupials, all the things that can kill you, and the appalling length of time it takes to get there. But even by these normal standards of befuddlement, now that the internecine world of Australian conservative politics has punctured the American news bubble, I bet you’re wondering what the hell is going on. I sure am, and I’m Australian. Last night, despite this sunny continent being home to one of the most successful democracies on Earth, the governing party—once again—came after its leader.

Here are the basics. The week began badly for Prime Minister Malcolm Turnbull, a kind of Mitt Romney conservative with a business-friendly schtick and softer progressive views about gay marriage and getting rid of the Queen. (He tried to claim he was like Trump—both supposed political outsiders—but no one bought that for a second, especially after their very testy first phone call.) For months, he’s been facing a revolt from the right wing bits of his conservative governing coalition, aided by radio blowhards and Murdoch’s tabloids.

Finally, a leader of this rebellious faction emerged, a filthy rich former cop with dead eyes from Queensland, one Peter Dutton, who became famous beyond Australia’s borders for ruthlessly enforcing them. Former Prime Minister Tony Abbott, who had been deposed by Turnbull and not-so patiently waiting for the moment of revenge for being turfed out himself, has had his fingerprints all over this coup.

Desperate, Turnbull, called the first “spill” (that’s what we Aussies call the party leadership vote, which has the additional resonance of “blood”) earlier this week—and won. But he knew his days were numbered: Dutton resigned from his cabinet and moved to the backbench to whip up more support. Turnbull, appalled by Dutton’s betrayal (and, presumably, his personality), knew that while he couldn’t survive the week, he might still be able to organize a more unifying candidate for the inevitable showdown.

What about the treasurer? A stocky bloke called Scott “ScoMo” Morrison, who basically looks like the aggregate Australian man of a certain age, was asked to step up for the post with the world’s worst job security. With his last opportunity to deploy some graceful political jiu-jitsu, Turnbull didn’t challenge the leadership and called the backlash an “insurgency” and “madness”. The party voted. And in a big loss to the revolutionaries and revenge artists, Dutton lost, and an utterly unexpected Morrison became the country’s 30th Prime Minister—the sixth in just over a decade. Turnbull was the fourth prime minister in a row to be sacked before serving the full three-year term.

Even Australians are asking, “WTF.”

A big part of the “WTF” is climate change. Turnbull was trying hard to get a new energy policy through parliament that sought to enshrine emissions reductions drawn from the Paris agreement—but instead, it inflamed familiar old divisions between deniers and worriers, and between business and environmental interests. The pressure became too much and Turnbull eventually caved. Yet, the damage was already done. Fights over climate policy, mixed with twitchy reactions to polling in swing districts, and debates over how to manage Australia’s economy, have killed off a several prime ministers now, conservative and liberal alike.

In his exit press conference on Friday, Turnbull put climate policy right at the heart of his demise. “In terms of energy policy and climate policy, I think the truth is that the [governing] Coalition finds it very hard to get agreement on anything to do with emissions,” Turnbull said. He blamed “bitterly entrenched views that are actually sort of more ideological views than views based, as I say, in engineering and economics.”

Turnbull, of course, won the prime ministership after a battle with his predecessor Tony Abbott, infamous around the world for repealing Australia’s groundbreaking carbon pricing system. Here’s a summary I put together in 2014:

Climate policy has hung over Australia’s politicians like a dark storm cloud since at least 2006, and it has been instrumental in the downfall of multiple political leaders. Here’s a short summary:

2009: The conservative opposition party (called the Liberal Party) replaced its leader, Malcolm Turnbull, [2018 update: yup, he eventually became prime minister] who supported a cap-and-trade scheme, with Tony Abbott, a man who is vehemently opposed to the idea.

In the meantime, Prime Minister Kevin Rudd—from the Labor party—failed to get the votes to pass his carbon legislation through parliament and subsequently was overthrown by a popular deputy prime minister, Julia Gillard, who promised not to introduce carbon legislation.

Gillard did in fact introduce carbon pricing in 2011. Cue vitriolic opposition from an invigorated conservative opposition led by Abbott. Gillard’s popularity plummeted as opponents attacked her credibility; she was then challenged and defeated by a resurgent Kevin Rudd, in 2013.

Abbott took office in a landslide and has proceeded to repeal the carbon legislation, which he called a “toxic tax.”

And here’s a 2013 video I made explaining why this has become such an issue in Australia:

What happens next is anyone’s guess. PM “ScoMo” still has to pick up the pieces of what’s left of his party, nearly destroyed by petty rivalries. The electoral timetable won’t be forgiving for a government trying to get back on its feet, and a new prime minister who needs to introduce himself to the public as a fresh leader: by law he must call a new federal election any time between now and May 18, 2019. Which may seem like just around the corner. But if you’re prime minister of Australia, that’s approximately one million years, and every second is treacherous.