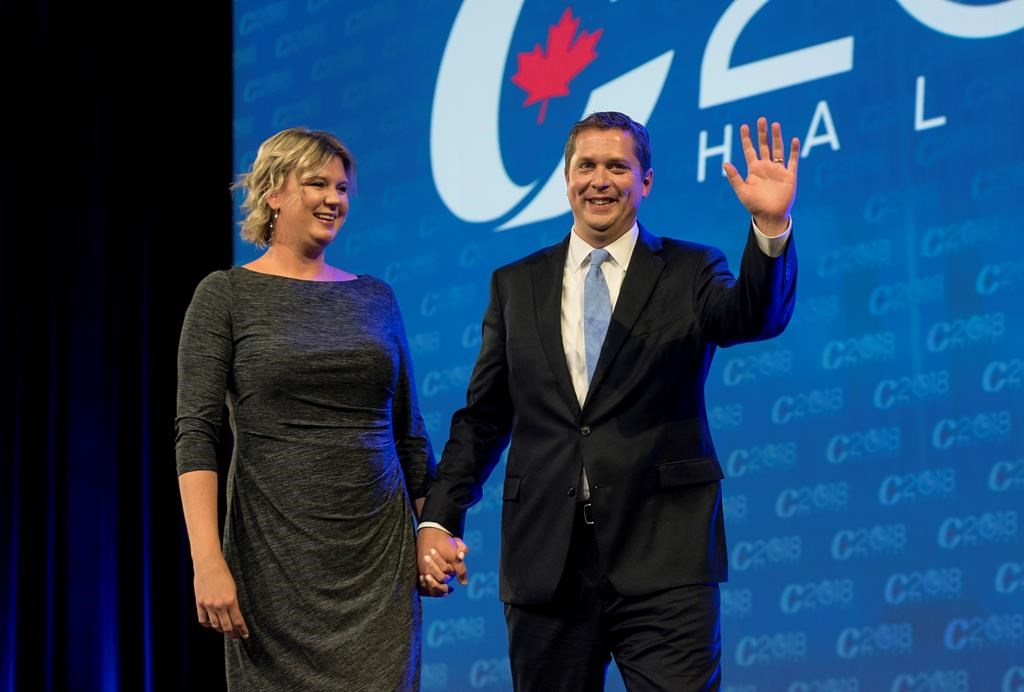 Conservative leader Andrew Scheer and his wife Jill Scheer arrive on stage at the Conservative national convention in Halifax on Thursday, August 23, 2018. Photo by The Canadian Press/Darren Calabrese
Previous story

What was expected to be a standard-issue, pre-election rallying cry has suddenly become one of the most important speeches of Andrew Scheer's career as leader of the federal Conservatives.

Scheer takes the podium tonight at his party's biennial policy convention in Halifax, still smarting from the rhetorical beatdown he endured Thursday at the hands of renegade MP Maxime Bernier.

Scheer's keynote speech — billed by organizers as the convention highlight — will be designed to refocus the spotlight on the leader's vision for the party and how he plans to wrest power away from Justin Trudeau's governing Liberals.

Scheer is expected to not only to rally the troops, but to lay out some of his policy objectives in anticipation of voters heading to the polls in October 2019.

Senior Conservative sources also say he will offer a glimpse into his personal life in an effort to help Canadians get to know him better.

"You're seeing a lot of support," said MacKay, who like other Tory loyalists is likening Bernier's decision to quit the party as a passing storm that's already blown over.

"It's better if there is this type of incident. Nobody wanted it and nobody truly expected it, but it's better that it happened and it happened soon and get it over with. And people I think have already moved on. It's like a weather system that passed over this convention and it's over."

MacKay, who will introduce Scheer before today's speech, said people are looking for a clear vision from the Conservative leader.

"Andrew has an incredible ability to reach people at a personal level and I think you'll see a lot of that on display tonight in his remarks," he said.

"Andrew is going to have to put his alternative out there, put his policies in the window, give Canadians ample time to be comfortable and attracted to those policies."

Before Scheer takes the podium, party members will get down to business, voting on a package of 74 policy resolutions — including some that are expected to touch off some fiery debate.

One resolution proposes scrapping Canada's supply management system for dairy and poultry products — a major sticking point in NAFTA talks and one of the central irritants behind Bernier's scorched-earth diatribe against his former party.

Several other resolutions confront head-on the issue of abortion, always a hotly contested issue on the Conservative convention floor. Another seeks to change the wording of the party's policy promoting equality for women to equality for "Canadians."