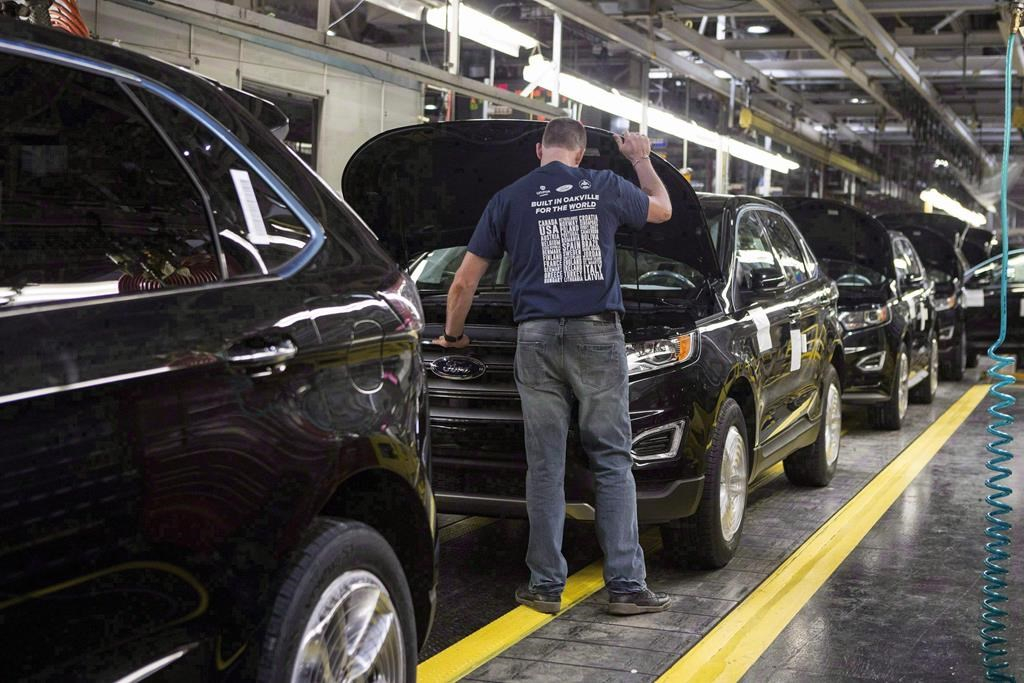 A potential trade deal between the U.S. and Mexico has been greeted with cautious optimism in the Canadian automotive sector despite renewed threats by U.S. President Donald Trump to impose tariffs on the industry.

Trump said Monday the U.S. and Mexico had reached a bilateral "understanding" on a trade agreement that could replace the existing North American Free Trade Agreement (NAFTA).

Details from the Office of the U.S. Trade Representative show the preliminary deal includes a wage provision that 40 to 45 per cent of auto content would be made by workers earning at least US$16 per hour, and an increase in the auto content required from the NAFTA region to 75 per cent from the current 62.5 per cent.

If auto content and wage agreements go forward with Canada on board, they could stem the flow of auto sector jobs to lower wage jurisdictions, said Unifor president Jerry Dias.

"I believe this should stop the bleeding in Canada."

Dias said he was concerned Trump linked potential tariffs on Canada's auto sector to concessions on the agricultural supply management system, but said it was nothing new.

"It's a lot of rhetoric, but ultimately he's doing the rhetoric that he's been doing since the beginning, that he'll slap on tariffs if we don't make some major moves on the importing of their agricultural goods."

Investors have also welcomed the news, boosting automotive stocks on both sides of the border. Canadian auto parts manufacturer Martinrea International Inc. closed up 6.18 per cent; Linamar Corp. closed up 6.57 per cent; and Magna closed up 4.24 per cent on the Toronto Stock Exchange.

Bill Anderson, director of the University of Windsor's Cross Border Institute, says he's concerned about a condensed negotiation window now that key issues between the U.S. and Mexico look to be settled, but that the wage provision would help Canada's sector.

"Essentially it's a way of excluding Mexican content, so even though Canada and Mexico have presented a united front, you now have a situation where you could make the argument this will benefit Canada," said Anderson.

"On that particular issue, what benefits the United States also benefits Canada."

Anderson said it showed the U.S. had also made concessions during negotiations.

"It's much better for Canada than earlier in the negotiations when they were saying that there had to be a certain amount of American content."

The timeline for negotiations could be tight, as a deal would have to be reached by Friday to meet a 90-day notice window for a deal to be signed by outgoing Mexican President Enrique Pena Nieto and for Congress to act before midterm elections.

Canadian Vehicle Manufacturers' Association president Mark Nantais said it was time for the Canadian government, which was excluded from the talks between the U.S. and Mexico in recent weeks, to get back to the table.

"Canada's got a very small window here in which to step up, and we certainly encourage them to do that."

A spokesman for Foreign Affairs Minister Chrystia Freeland said the minister will head to Washington on Tuesday to rejoin face-to-face negotiations with the United States and Mexico on trade.

Nantais said he's encouraged to see progress on NAFTA negotiations, but that it will be critical to understand the terms that have actually been agreed to so far.

Trump threatened to impose 25 per cent tariffs on Canada if a deal isn't reached, but Nantais said it still seemed to be a negotiating tactic.

"We have to realize he's still in a negotiation, so while he may have made progress on a bilateral relation with Mexico, there's Canada yet to go."

BMO chief economist Douglas Porter said in a note that the deal "raises more questions than answers for Canada" and leaves the country in a difficult situation.

"Canada now appears to be in a near-take-it-or-leave-it situation with respect to spinning the U.S.-Mexico deal into a broader agreement on a revamped NAFTA."

Still, he noted investors have welcomed the news and likely helped push the Canadian dollar up half a per cent on the headlines.

"Perhaps the clearest indicator that the market is viewing the U.S.-Mexico deal as a positive for Canada is the strengthening of the Canadian dollar."