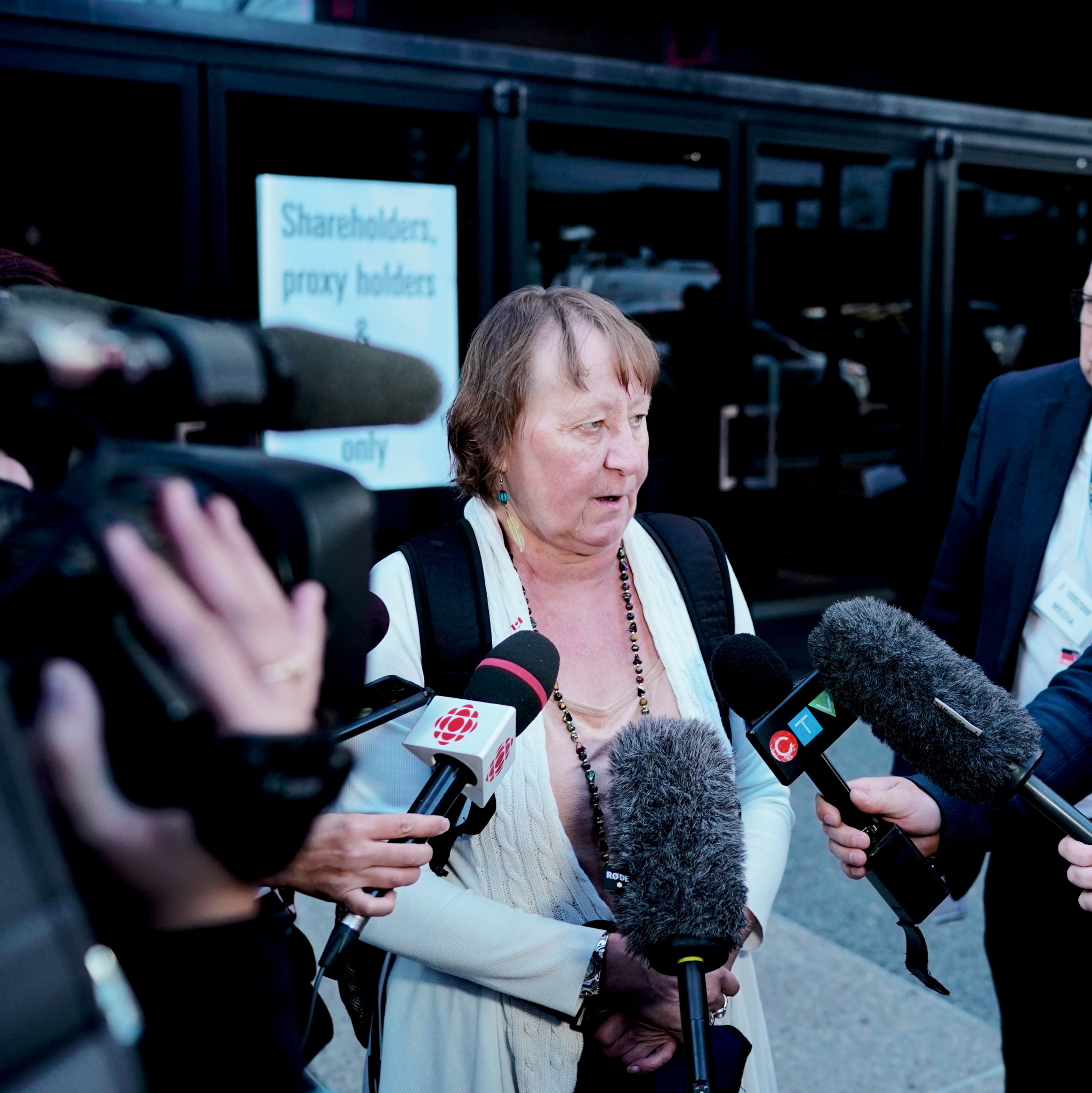 Shareholder Kathleen Lang voted to sell her shares, but wants pipeline to proceed, she told the media in front of Calgary's Convention Centre outside of the Kinder Morgan shareholder meeting earlier today in Calgary. Photo by Louie Villanueva
Previous story
Next story

Shareholders of Kinder Morgan Canada voted nearly unanimously in favour of a deal to sell the company’s Trans Mountain expansion to federal taxpayers for $4.5 billion within an hour of a court decision stalling the pipeline project Thursday.

Amid tight security in a downtown Calgary ballroom, chief executive officer Steven Kean chaired a special meeting where it that took fewer than three minutes to pass a resolution approving the deal brokered in late May.

“I declare the special resolution has been passed and the meeting is terminated,” a smiling Kean told a silent room as the proceedings concluded.

“By the way, 99 per cent plus of every class of shareholders voted in favour of the transaction.”

Shareholders who voted in favor of the special resolution represented 324,524,791 shares, while those against represented 54,071 shares, or just 0.02 pe rcent. Fewer than 50 shareholders were in the hall; others voted by proxy.

Five Kinder Morgan executives now will be able to cash out more than 300,000 shares - worth millions of dollars - because they are leaving the Texas-based multinational energy company to join the subsidiary that is being purchased by the federal government.

Both the Calgary Police Service and the company appeared ready for trouble at the meeting.

Five police vehicles were outside the hall prior to the vote and inside media representatives had to pass through a phalanx of security officers on guard against interruptions. There were none. Reporters were instructed to wear a tiny Canadian flag pin on their lapels for identification.

'Not a death knell,' says expert

Kinder Morgan officials declined to be interviewed about the court decision, but in a prepared statement the company said the deal with the federal government would be finalized within seven days and could close as early as tomorrow.

It took fewer than three minutes for #KinderMorgan shareholders to pass a resolution approving the sale of #TransMountain assets to Canadian taxpayers.

Shareholder Kathleen Lang, who voted in favour of the sale even though she wished the company had kept up its fight to proceed with the pipeline project, was the only person who agreed to speak to reporters after the meeting.

The court decision is a setback for Alberta Premier Rachel Notley and members of her New Democratic Party government who have staked their hopes of re-election next spring on the pipeline project proceeding.

He blamed “foreign-funded interests” using the courts to stall the project. And he sharply criticized the court, asserting that the judiciary did not understand the impact of its ruling on jobs, businesses and First Nations' opportunities.

"We urge the federal government to explore every avenue possible to get the Trans Mountain expansion back on track, including but not limited to an immediate appeal to the Supreme Court, re-engagement of the consultation process, and potential legislation," he said on Twitter.

"Today’s ruling makes it abundantly clear that the Federal Court of Appeal has no regard for the real-world economic impact this decision will have on ordinary Canadians’ lives and livelihoods," he added.

Speaking to reporters he criticized Notley for taking a “tone of triumphalism” that was proven wrong.

“She drank the proverbial Kool-Aid believing that a punishing carbon tax would get the environmental radicals to down tools.” Kenney said. “The opposite has happened.”

The court decision means a delay, not a death knell, for the project, said David Wright, an energy and Indigenous law expert at the University of Calgary.

He expects a construction delay of nine months to one year so an environmental impact of the increase in oil tanker traffic from the project can be studied by the National Energy Board and the government can conduct better consultation with native groups.

“There is still a lot of cloudiness after this ruling about what constitutes adequate consultation,” Wright said.

“But the court has said clearly that listening to Indigenous groups is not enough, there needs to be a meaningful, two-way dialogue where the government addresses their concerns.”