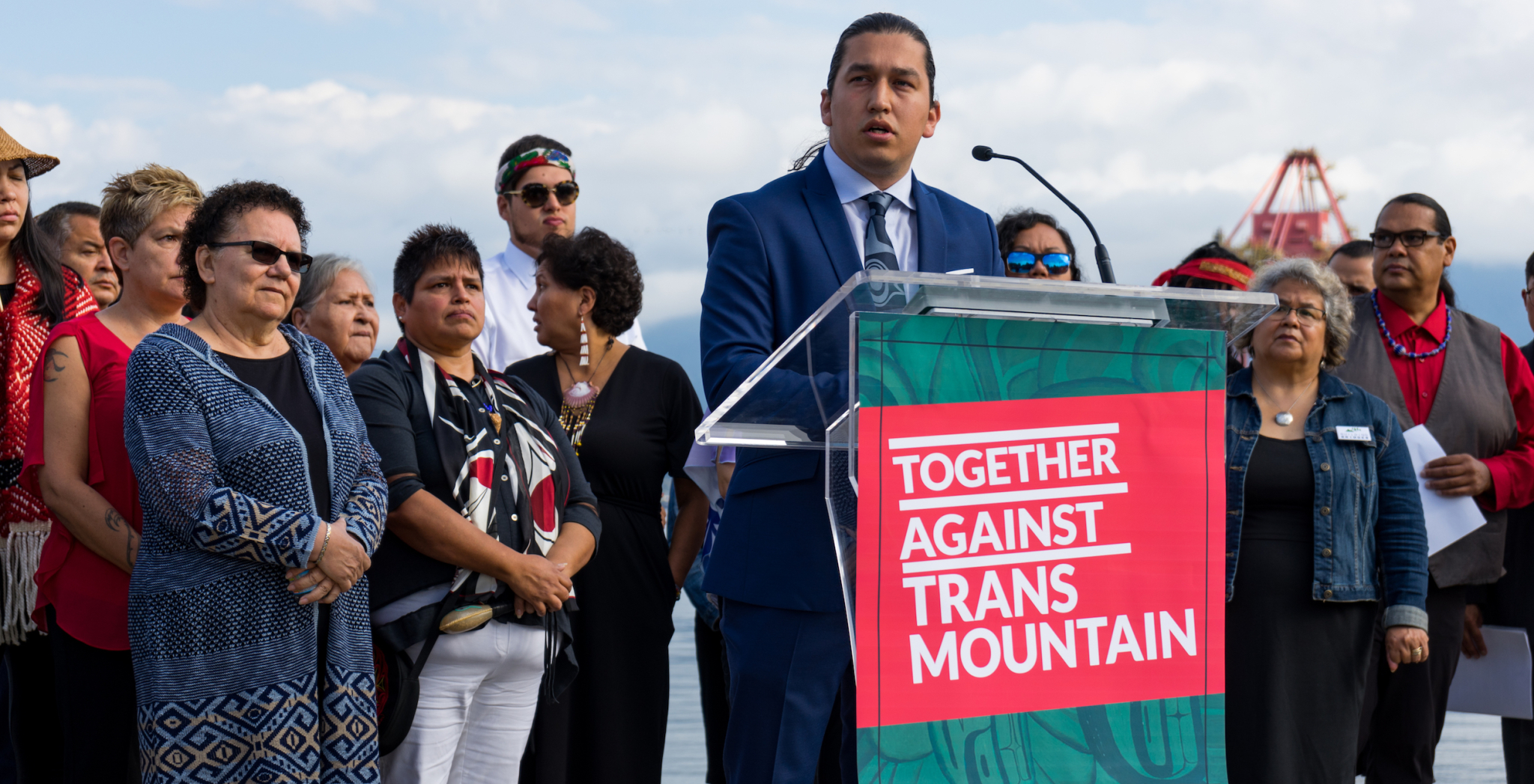 Khelsilem, councilor and spokesperson for the Squamish Nation, speaks Aug. 30, 2018 at Crab Park in Vancouver, B.C. after the Federal Court of Appeal ruling on the Trans Mountain pipeline expansion project. Photo by Michael Ruffolo
Previous story
Next story

One by one, Liberal and Conservative MPs on the Commons committee examining Indigenous affairs turned on their microphones, leaned in and said, “No.”

Finally, it was Rachel Blaney’s turn.

“Yes,” she said, breaking the rhythm of the room and causing some other MPs to turn and smile at her.

Blaney, a New Democrat who is a vice-chair of the Commons committee on Indigenous and northern Affairs, found herself the lone vote in favour of her own motion, at an emergency meeting about a court ruling overturning the Trudeau government’s approval of the Trans Mountain oil pipeline and tanker expansion project.

Hers was one of two motions defeated on Friday, when for the second time this week, the government used its majority on a House of Commons committee to shut down opposition attempts to call ministers responsible for Trans Mountain to appear before them.

Blaney’s motion on Friday would have had the committee undertake a study of the Trudeau government’s consultation process for that project with First Nations.

The Aug. 30 Federal Court of Appeal decision faulted the government for not engaging in a “considered, meaningful two-way dialogue” with First Nations over the pipeline project during its final stage of consultations.

Instead, the court said government officials acted during that stage “essentially as note-takers” that “passively” transmitted First Nations concerns to decision makers. The court also said the National Energy Board made a "critical error" in not including oil tanker traffic in its definition of the project, which the court said tainted the board's final report.

The pipeline project is now in limbo, with construction brought to a halt, until the government addresses the faults raised in the unanimous court ruling.

“This was a motion that, in good faith, asked for meaningful discussion around Indigenous consultations,” Blaney told reporters after the meeting.

“I was very disappointed when I put forward my motion to talk specifically about consultations with Indigenous communities, that both the Conservatives and the Liberals voted against it.”

'It is not good faith to send note-takers'

The NDP has been trying for months to get the government to allow public servants to appear before a Parliamentary committee to discuss how the pipeline project’s approval process played out in the months before the government announced its decision publicly.

National Observer reported in April that public servants were told by a high-ranking official to find a "legally-sound" way to approve the project, during an internal meeting that took place before the government had publicly stated it had made any decision.

The NDP wrote to Prime Minister Justin Trudeau after that story, saying its revelations “throw into question the legitimacy of the government’s entire review.” NDP Leader Jagmeet Singh later told reporters the party would press to hear from a former associate deputy minister who had a lead role in the government's review.

On Friday, Blaney said the NDP was still interested in hearing from public servants, to “understand from them what they experienced and what they thought their task was.”

“That’s an important factor in this discussion,” she said.

In committee, she focused on the improper consultations that were found by the court. "It is not good faith to send note-takers,” she said.

"The Government of Canada cannot say that they are surprised to be here...the consultation process was not considered thoughtfully and was rushed.”

'They shut us down'

In addition to Blaney’s motion, another motion by Cathy McLeod, the Conservative critic for Crown-Indigenous Relations and Northern Affairs and another vice-chair of the committee, called for a study of the government’s purchase of the pipeline project.

McLeod said she was “angry” and “disappointed” that the Liberals were determined to block committee efforts to hear from key ministers on the Trans Mountain file.

“The prime minister promised that Parliamentarians were there to hold the government to account. He is running from account,” she said. “They shut us down. It’s very disrespectful to Parliament.”

Speaking outside the committee room after the meeting, McLeod said she felt the NDP motion addressed an issue that was already covered in the court ruling.

In committee, McLeod said Trudeau has "failed Albertans, he failed British Columbians, he has failed Canadians...because we can't get our resources to tidewater."

She referred to a tree-planting company near the pipeline route which had been anticipating the business that would have come when the pipe is built nearby. "This is having real, important impacts on people's lives...this is not just an insignificant decision," she said.

Conservative MP Kevin Waugh said the court ruling "has sent shockwaves" through Western Canada. He noted how Suncor, the country’s largest oil and gas producer, has said it wouldn’t move forward with expansion plans without seeing progress on the ground.

The Liberals did not give extended speeches during the committee meeting. Liberal MP and committee member Mike Bossio said the government was "carefully reviewing the court’s decision" before deciding whether to appeal to the Supreme Court.

"We will ensure the project moves forward in the right way,” he said.

Parliamentary Secretary to the Minister of Crown-Indigenous Relations Marc Miller echoed his comments outside the committee room.

“We have to look at this court case carefully, and come up with a strategy that moves this forward on a project that is in the national interest,” he told reporters.

An appeal to the Supreme

An appeal to the Supreme Court of Canada will show bad faith by the Federal Liberals. After all, the Liberal government touted reconciliation with indigenous peoples during the federal election. They cannot legitimately question their own political platform. Which leaves consideration of the Salish Sea and environmental damage caused by increased tanker traffic (a.k.a. human activity). Remember Kinder Morgan refused to disclose its "state-of-the-art" spill response system on the grounds that it was protected by competitive trade secrets.

The Liberals love the silence

The Liberals love the silence of unanimity and its many other "perfections".... https://canadianviews-ymo.ca/the-stunning-perfection-of-unanimity/