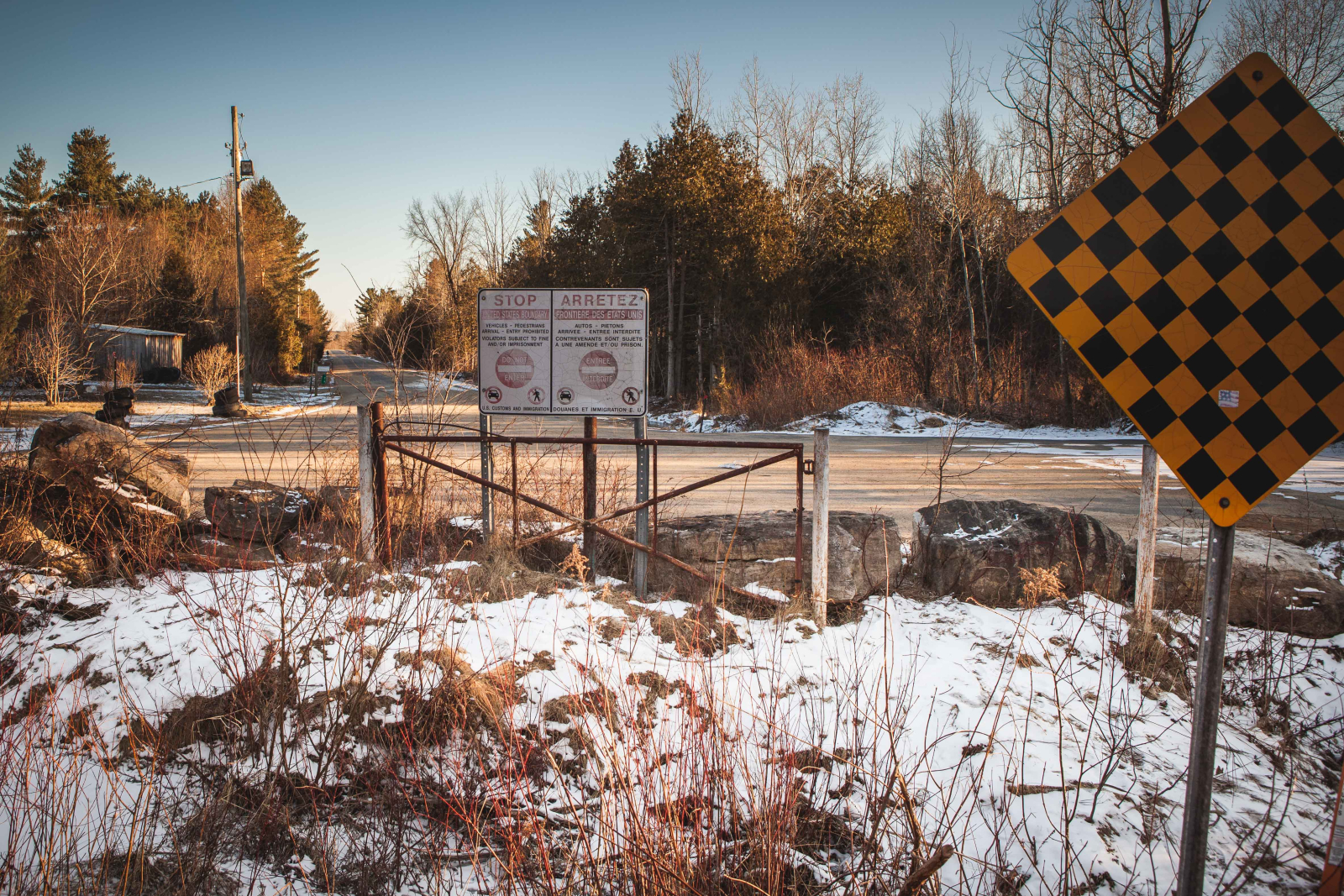 Asylum seekers arrived along this path, shown in March, 2017, from the United States into the Quebec border town of Hemmingford by car, taxi, bus, and on foot. Photo by Alex Tétreault.
Previous story

In the early 1900s, Black settlers came to Alberta from the United States in response to government advertisements. Their arrival sparked a backlash among some Albertans who condemned what they termed a “negro invasion” and a “flood.”

In response, the Canadian government instructed medical personnel at the border to heavily scrutinize the newcomers and offered doctors bonuses for every Black person they rejected. Inspectors were told to make sure African Americans had at least $200 when they arrived, an amount they could waive in the case of white settlers.

Initially, the Black settlers were able to overcome these barriers and about 1,000 settled in Alberta. However, these and other measures were ultimately successful, with the one major wave of Black settlers ending in 1914.

An Edmonton newspaper columnist wrote that the few Blacks among the arrivals in Edmonton in one month in 1911 showed "there was never any real danger" of being "inundated with a flood of Blacks.”

Canada’s history of welcoming millions of migrants from around the world has been tainted by unjust exclusions.

Notable among them are the Chinese head tax of 1885, which made immigration to Canada prohibitively expensive for Chinese immigrants; the turning away of the Komagata Maru ship carrying Sikhs in 1914; and the rejection in 1939 of the MS St. Louis ship carrying Jewish refugees fleeing the Second World War.

Such historical injustices are important to remember because their legacies are still felt and can influence our discourse around asylum.

Unfortunately, some current discourse is strikingly similar to talking points from the past with asylum seekers referred to as a “flood,” erroneous descriptions of them as “illegal” and unfounded negative descriptions that they are “taking advantage of Canada.”

An informed discussion on refugees requires debunking some myths. For starters, people crossing the border between official border points to claim asylum are not “illegals.” Assertions that they are illegal are nothing more than a dog whistle and have no basis in fact. It is a right in Canadian and international law to claim asylum.

Second, those who come here do not “skip” to the head of a line but are processed in a separate stream from refugees the Canadian government brings from overseas camps for resettlement.

Canada’s history of welcoming millions of migrants from around the world has been tainted by unjust exclusions.

I should also note that crossing a border to claim asylum is not “abusing our system.” We have a system in place for those who need to seek asylum. Using it does not take advantage of the system; rather it acknowledges people's basic human rights.

I can understand if some people are confused about our complex refugee procedures. However, those who work in media and politics do not get a pass. They hold positions of extreme public trust and should understand those distinctions before they choose to delve into this topic. Misinterpreting these basic facts do not hurt them. Rather, they hurt the people seeking asylum.

Canada is not in a crisis

We should also note that Canada is not experiencing a “flood” of refugees - nothing close to it. Instead, developing countries are responding the most to the increasing number of refugees in the world. In fact, the top five countries that accept refugees per capita are Lebanon, Jordan, Turkey, Uganda, and Chad.

Perhaps a starker example is Bangladesh, which is currently home to nearly 700,000 Rohingya refugees. During the height of the Rohingya refugee crisis, Bangladesh processed about 50,000 people per day. That’s the number of asylum seekers Canada took in last year.

Simply put, the idea that our refugee system is being “choked” and “overwhelmed” is artificial and based on the myth of scarcity. There is a refugee crisis in the world but it isn’t here. Our system has been deliberately underfunded which has led to increasing wait times. The system is unprepared to deal with modern realities.

It’s extremely important to note that this scarcity is what allows politicians and pundits to blame long wait times on asylum seekers rather than on an underfunded system that they created. Thankfully, steps have been taken to increase resources for processing asylum seekers in the 2018 budget.

Historically, Canada has been able to rely on geographical isolation while other countries carried the burden of refugee assistance. However, we no longer have this excuse, given an evermore interconnected world, coupled with the highest number of refugees since the Second World War, a number projected to rise with environmental refugees.

We bear the responsibility to develop humane policies and properly fund an asylum system that is able to care for those who come to Canada seeking freedom. People are not born expecting to become a refugee. We live our lives but unexpected conflict means that we are forced to flee. Conflict came to Somalia and forced my family to flee. The same thing could very well happen here.

Good points about the legal

Good points about the legal right to claim asylum for those escaping state persecution, and criticizing the contrived bureaucratic bottleneck which makes such claimants wait unduly for a ruling.
As I understand it there is as yet no comparable legal right to asylum for environmental/economic refugees.
Climate change is generating both political and environmental refugees in large and growing numbers.
The Canadian state response to this large and ongoing phenomenon will teach us much, one way or another, about what "Canadian values" really are.
John Deverell

In every privileged country

In every privileged country of the world where anti-immigrant fever is taking hold all the myths noted in the article as well as some of the ugliest lies about these "others" are used to fuel the rejection of people in need. For those who are nominally Christian it is a bald faced rejection of their religion as well. For those without religion it is pure bigotry, ignorance and baseless fear. Humans, unfortunately, have evolved to fear the "other". It can be a survival tactic - but in most cases it is the lizard brain overtaking the "sapiens" part of the human brain. Clearly we are not yet byond the idiocies of internecine tribal conflict.

By The Canadian Press in News, Politics | August 3rd 2018