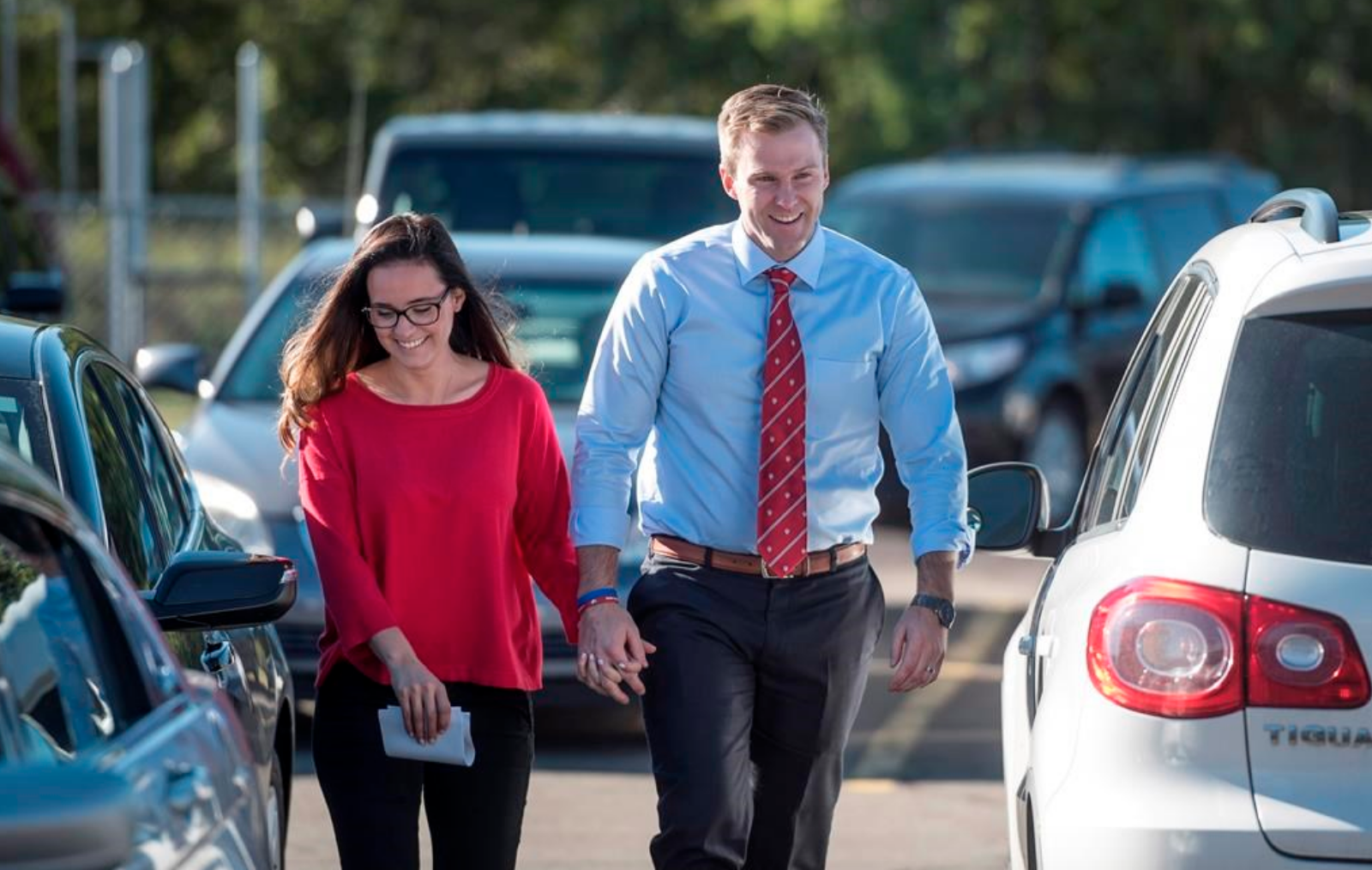 Incumbent Premier Brian Gallant walks with his wife Karine Lavoie ahead of the provincial election on Sept. 24, 2018. Photo by The Canadian Press
Previous story

Voters in New Brunswick turned their backs on the province’s entrenched two−party system for the first time on Monday, electing enough third party candidates to leave the Liberals and Progressive Conservatives in an apparent dead heat in what is sure to be a minority parliament.

About two hours after the polls closed, the Liberals and Tories were both leading or elected in 21 ridings each, while the upstart People’s Alliance had four and the Greens three. A total of 25 seats is needed for a majority in the 49−seat house.

The Greens and People’s Alliance had elected at least two members each.

The province has had virtually no experience with minority governments. The last time a third party held the balance of power in the legislature was October 1920 when two farmers’ parties managed to win 11 seats between them.

As many polls had predicted, the leader of the People’s Alliance, Kris Austin, won his seat in Fredericton−Grand Lake, a breakthrough for a party that was contesting its third election and had never won more than three per cent of the popular vote.

The party’s "common sense" platform took aim at official bilingualism, saying the dual systems in health care and school busing are costing the province too much money.

"This is what victory looks like folks," Austin said Monday night, who said he’s willing to work with any party "that has some of the ideas that we have been pushing."

"Part of being a minority government is negotiation, it’s compromise, it’s working with all other parties," he told a cheering crowd.

"It looks like I’m going to be joined by other Green MLAs," he told his supporters. "I know for sure we will be able to applaud each other’s speeches."

Higgs and Gallant both won in their ridings.

On the campaign trail, Gallant and Higgs commanded most of the attention, and the two men couldn’t have been more different.

Gallant, a lawyer and the youngest premier in Canada, is a fresh−faced, fluently bilingual champion of gender equality, healthy eating and exercise. Recently married, the former tennis instructor was once crowned Mr. New Brunswick at a provincial competition.

Higgs is a dapper, grey−haired former finance minister and grandfather who has described citizens as customers, and has likened governing to running a business "and getting results."

Gallant countered by claiming Higgs would cut $500 million from the province’s budget while eliminating up to 2,000 public service jobs.

As the incumbent premier with the most seats, Gallant would traditionally be given the first chance to form a government by the lieutenant−governor. It’s not unusual for minority governments to survive by seeking compromises with the other parties.

However, the Tories and one of the third parties have the option of combining forces, either through a coalition or some less formal arrangement, which would set in motion a high−stakes process that could see the Liberals returned to the opposition benches.

That’s what happened in British Columbia in May 2017, when Liberal Premier Christy Clark squeaked out a razor−thin victory over the NDP, with the Green party holding the balance of power for the first time in Canadian history.

At the time, Clark had the option of dissolving the B.C. legislature and calling for another election, but she chose instead to ask the lieutenant governor for the chance to govern. Seven weeks later, the Liberal government was defeated on a non−confidence vote in the legislature.

British Columbia’s New Democrats then formed a minority government with the support of the Greens.

At the close of the New Brunswick campaign, the Liberals held 24 seats in the 49−seat legislature, the Progressive Conservatives had 21 and the Green party had one seat. There was one Independent and two vacancies.

Gallant was seeking a second consecutive majority government, but recent history wasn’t on his side. No government has won two terms in office since 2003.

To be sure, the next government will be faced with some tough choices. The province has been saddled with 11 consecutive projected budget deficits. Though the most recent budget was balanced, Gallant said a Liberal government would table budget deficits for two more years before returning to balance three years from now.

Higgs said he would balance the books in two years.

Meanwhile, the net debt is expected to reach $14.4 billion by the end of this fiscal year, and the province remains at the bottom of the list with Newfoundland and Labrador when it comes to economic growth.

Higgs has repeatedly warned the province that its education test scores are nothing to be proud of, health−care wait times are the worst in the country and that New Brunswick has the lowest median income in Canada.

The NDP, led by Jennifer McKenzie for just over a year, failed to make much of an impression on voters. The party was in last place in the most recent opinion polls. McKenzie ran in the same Saint John riding where Elizabeth Weir was the NDP member until 2005 — the last time the party had a seat in the legislature.

"I want to congratulate premier−designate," McKenzie said in her speech Monday night, and then paused and looked around, "Gallant or Higgs?"

With rising interest rates those governments that are fiscally responsible won't be in the position that Mr. Trudeau has put us in.