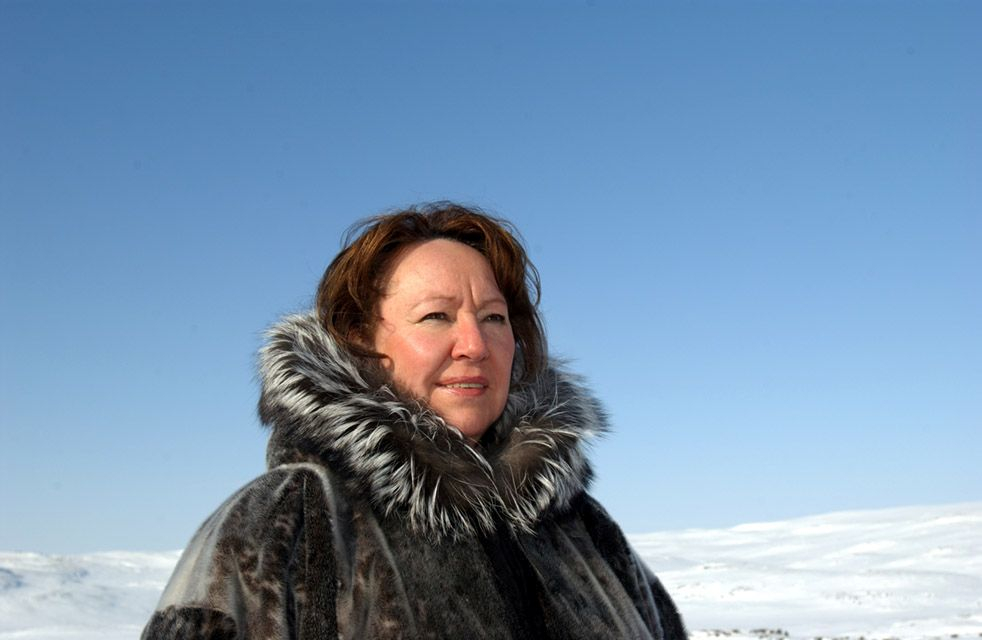 Sheila (Siila) Watt-Cloutier shown in the Arctic for the cover of her 2015 book, The Right to Be Cold. Photo by Stephen Lowe
Previous story
Next story

Climate change issues have risen again to the forefront of public discussion with the release of a special report by the United Nations Intergovernmental Panel on Climate Change (IPCC) on the impacts of global warming of 1.5°C above pre-industrial levels. But Inuit and the world’s Indigenous peoples live with the impacts of climate change every day, even after the news cycle moves on.

The IPCC report paints a bleak picture that humans have already caused approximately 1.0°C of global warming and at the current rate this will reach 1.5°C between 2030 and 2052. Temperatures are rising faster in the Arctic and climate-related risks increase for natural and human systems as temperatures rise.

The IPCC report notes that the greatest challenge in the fight against climate change is not the lack of scientific know-how, but the lack of political will. It seems that politicians and voters are not recognizing how profoundly climate change will affect them, their children and grandchildren. Inuit and Indigenous peoples are well placed to add that human understanding to spur action.

Climate change is happening now in the Arctic and it is affecting every other part of the world because the north and south poles are an integral part of the planet’s own cooling system. The rest of the world cannot afford to ignore our struggles in the Arctic because what happens in the Arctic does not stay there. We know this as we witness more and more disasters around the world as polar ice disappears. The connection is there.

The world has come to know the wildlife of the Arctic more than its people. It is critical to humanize the issue of climate change because the changes that Inuit and Indigenous peoples observe in their close relationship with the natural environment provide warning and wisdom for the rest of humanity in collectively working to curtail climate change.

Wisdom is lost with the ice

We Inuit hunters, fishers and gatherers are connected culturally, nutritionally, emotionally and spiritually to the land, waters and ice. These are our universities. It is where we train our children to develop their character and life skills for the opportunities and challenges of life. Teaching wisdom on the land and the ice is the hallmark of Inuit culture. It is not only the ice that is at risk of being lost, but the wisdom that comes with it.

The permanence of ice has always been our landscape, providing our identity, our highways, our training ground, our life force, just as the permanence of rivers, mountains, plains and coastlines may shape the identity of our southerly neighbours. One must remember that this ice for us is about mobility and transportation and when it becomes precarious it immediately becomes an issue of safety and security.

The climatic changes have only added more stress and anxiety to a community with a historical context of trauma. Stress and anxiety related to climate change affects the victims of ever more extreme weather events in the north as well as in the south, whether they be hurricanes, droughts, floods or forest fires. This growing human trauma reflects the trauma that humans have been inflicting on our planet. We must make the connection that human trauma and planet trauma are one of the same.

'We're ready to help and lead'

In December 2005, I, along with 62 fellow Inuit petitioners from Alaska and Canada submitted a petition to the Inter-American Commission on Human Rights seeking relief from human rights violations of Inuit caused by greenhouse gas emissions from the United States. Since then, environmental advocates around the world have sought to protect human rights affected by dangerous climate change through various kinds of legal proceedings.

Given the United States is walking away from the Paris Agreement and other governments are slow to act, climate litigation is increasingly seen as an essential tool to protect human rights and to safeguard the environment, as we saw recently in the Netherlands and Colombia.

While Inuit and the world’s other Indigenous peoples are among the most seriously affected by climate change, we do not accept the role of victims. We have much to teach the world about sustainability and living in harmony with nature, and about being responsible stewards of nature. This is a critical message in support of the United Nations Sustainable Development Goals. Recognizing this unique role for Inuit and Indigenous peoples of the world restores our hope that we will be able to help address both climate change and the social and health crises afflicting many Inuit and Indigenous communities.

Inuit and Indigenous peoples provided life-saving guidance to early European visitors unfamiliar with the severe conditions of this land, which they ignored at their peril. With the IPCC report providing the scientific proof of ever-worsening climate change, it is time to rely on us for guidance as we are well-placed to explain in deeply human terms the climate crisis at our doorstep. We’re ready to help and lead urgent climate action.

Concerns grow about grey water in Canada's Arctic: report shows it could double

By Colette Derworiz | News, Politics | August 27th 2018
Reports from the Race to a Safer World

“The Right to be Cold” by

“The Right to be Cold” by Sheila Watt-Cloutier is well worth reading. It expands upon what she is saying here.

And here we are three years

And here we are three years later.... how exactly have we progressed with the global climate goals?
How much have the Inuit and Indigenous Peoples been allowed to contribute or even been allowed to fully participate in the yearly Convention of the "Parties". This is not about politics - this is about real people, real climate turmoil affecting humanity and survival.