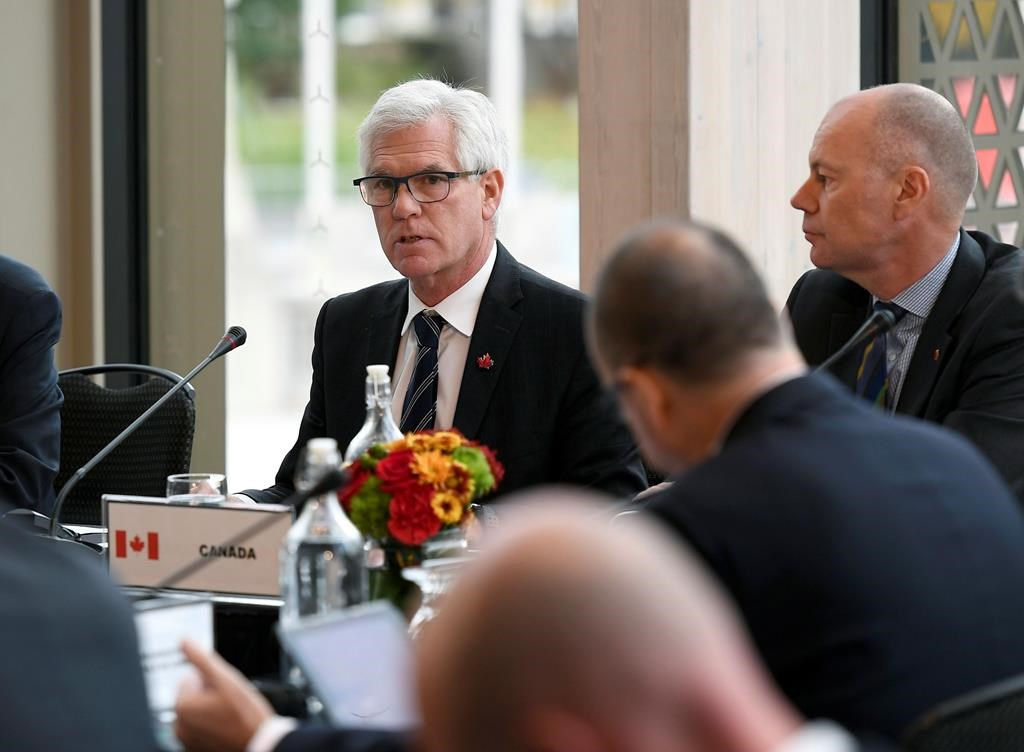 Minister of International Trade Diversification Jim Carr speaks during the opening session at the Ottawa Ministerial on WTO Reform, in Ottawa on Thursday, Oct. 25, 2018. Photo by The Canadian Press/Justin Tang
Previous story
Next story

Canada's trade minister says a small group from the World Trade Organization hope to convince the two biggest economies on the planet to save the beleaguered body, but gave no timeline to bring China and the United States into the talks.

Neither country took part in the day-long meeting in Ottawa on the future of the world's trade referee.

Building consensus on specific reforms will take time and will be impossible without approval from China and the United States, International Trade Minister Jim Carr said Thursday.

Carr didn't have an answer for when or how he expected to bring the Chinese and Americans into the conversation, and hoped that "force of argument" and the determination of a "very important, small group" of WTO members would win over the countries.

Reforms have been largely elusive for the 23-year-old WTO, but hostile rhetoric towards the organization from U.S. President Donald Trump — whose country wasn't invited to Thursday's gathering — is giving the meeting added urgency.

"We want to make the WTO more effective than it has been. It is in need of renewal," Carr said.

"We believe that there are many, many nations in the world, including the United States and China, who will see value in looking at new ways to approach old problems. It's time for this reform and this is a good place to start."

Trump's shadow loomed large over the sunlit room where 13 of the 164-member WTO talked about safeguarding and strengthening the dispute settlement system, improving the efficiency and effectiveness of the WTO monitoring function and modernizing trade rules for the 21st century.

Speaking in Winnipeg, Foreign Affairs Minister Chrystia Freeland said Thursday the government believed talks would be easier without the U.S. and China in the room.

Trudeau also mentioned the issue alongside Dutch Prime Minister Mark Rutte on Parliament Hill, saying both support the WTO and "a trading system that is rules-based and fair."

Trump has upended the world's trading order with his penchant for punitive tariffs on imports, including levies on steel and aluminum from Canada and Mexico.

The tariffs remain in place despite the North American partners agreeing on a new continental trade pact, christened the U.S.-Mexico-Canada Agreement.

The spending is part of ongoing efforts by federal officials to convince Trump that Canada is preventing Chinese products in particular from making their way to the United States.

Conservatives say the ongoing failure of the Trudeau Liberals to get Trump to lift the levies is forcing businesses to cut back on orders and other to lay off workers.

"The Liberal government has left Canadian steel and aluminum businesses hanging on by a thread."

The U.S. has openly blocked the appointments of new judges to the WTO’s dispute settlement mechanism, known as the appellate body — a tactic that threatens to paralyze the organization and prevent it from making decisions.

Still, Carr said no one at the meeting blamed Trump for the woes faced by the WTO.

— With files from Kelly Malone in Winnipeg

U.S. not invited to Canada's save-the-WTO summit of 13 'like-minded' countries

U.S. hits back with WTO challenge against Canada's retaliatory tariffs