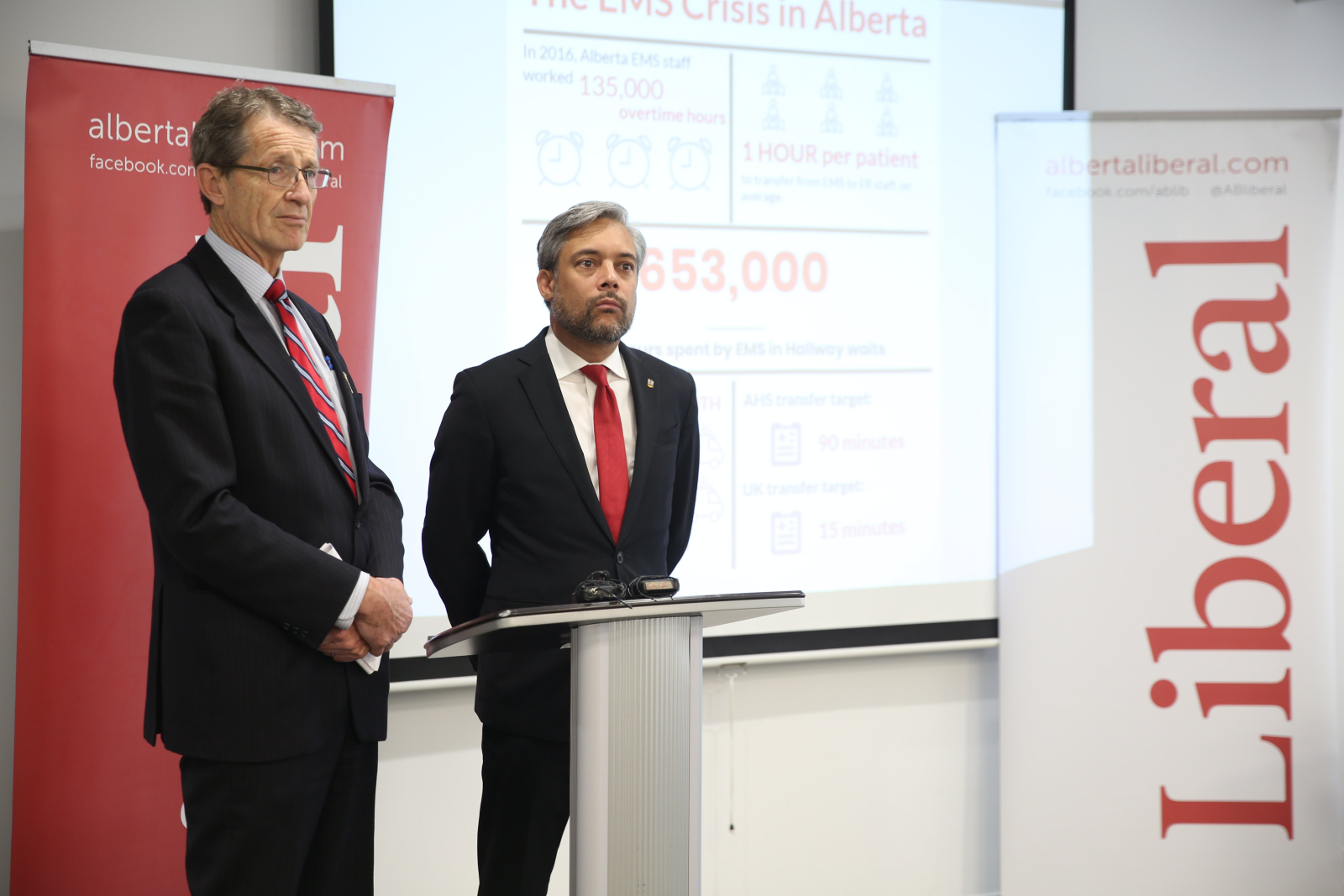 There's no need for an emergency debate on the looming, multibillion-dollar cost of cleaning up Alberta’s oilpatch, the governing New Democrats and official Opposition United Conservatives told the provincial legislature Tuesday.

The NDP and the United Conservative Party made the statements as they teamed up to prevent an emergency debate on the issue, proposed by Liberal MLA David Swann. The oil and gas industry could face an estimated $260 billion in financial liabilities, a joint investigation by National Observer, Global News, the Toronto Star and StarMetro Calgary revealed last week — a price tag Swann said could be a “silent financial tsunami.”

“This is a huge liability for our environment, for our provincial budget, for the oil and gas industry and for future generations,” said Alberta Liberal Party leader David Khan, who doesn’t have a seat in the legislature.

“It’s really concerning that the government which controls the legislative agenda is not willing to effectively address this, and the official opposition is not... holding the government to account on a such a critical issue.”

Last Thursday, the Alberta Energy Regulator (AER) apologized for a “staggering” presentation, made last February by one of its highest-ranking officials, which warned the province’s energy sector about the $260 billion estimate. That calculation is more than $200 billion greater than the previous calculation made public by the regulator — $58.65 billion.

The liability estimate factors in the costs of shutting down and cleaning up oil-and-gas sites at the end of their usefulness. That includes inactive wells, pipelines and tailings ponds in the oilsands.

The details of the presentation were made public by the joint investigation Thursday. In response, the AER said the number in the presentation was based on a “worst-case scenario” of a complete industry shut down, and using it was an “error in judgment and one we deeply regret.”

It also said the higher estimate had “not been validated by AER.” That appeared to contradict the presentation, which said the $260-billion figure was likely to be a low estimate.

On Friday, AER CEO and president Jim Ellis announced his resignation — a move the regulator said was “unrelated” to the joint investigation’s findings.

The issue was raised during question period in the House of Commons last week as federal politicians sparred over the joint investigation’s findings. However, Swann’s remarks Tuesday were the first time an MLA has raised the figure in the Alberta legislature.

Any MLA can ask to hold an emergency debate in the legislature. But before that happens, the Speaker must allow MLAs to debate whether the issue qualifies, then decides if the assembly should vote to hold the debate.

“This is a huge liability for our environment, for our provincial budget, for the oil and gas industry and for future generations,” Alberta Liberal Party leader @Dave_Khan told @EmmaMci #abpoli #oilsands #oilpatch #cdnpoli #PriceofOil

Swann argued that the price of cleaning the energy sector is a pressing issue, calling it a financial and environmental crisis that could affect generations. So far, companies have only submitted about $1.6 billion in security deposits to cover the cost, he noted.

“If not now, when will we.... address this silent financial tsunami?” Swann said. “The time for denial and inaction is over.”

However, the NDP and UCP said the issue is significant but longstanding, and not acute enough for an emergency debate.

“This government has in fact addressed it which means it is not an (emergency),” said NDP MLA Richard Feehan, adding that the current government has started improving practices.

“I did not hear anything (in Swann’s remarks) that would indicate the urgency that is required,” said UCP MLA Jason Nixon.

The speaker sided with Nixon and Feehan, deciding not to put the possibility of debate to a vote.

Khan said that, if left unaddressed, taxpayers could be left paying the $260-billion estimate — something that could triple Alberta’s debt, which is forecast to reach $71.1 billion by 2019-20.

“It’s a failure of leadership,” said Khan. “They just want to put their heads in the sand and not address the issue and kick the can down the road as other governments have done.”

No more taxpayer dollars to

No more taxpayer dollars to fund private profit, especially profits in an industry which is driving the nails into the coffins of numerous species, while they work their way up to killing off our own. Everyone's communities are flooding or burning or choking under smoke or being blown apart by windstorms, while the fossil fuel floggers continue to enrich themselves, literally at our expense.

No Kinder Morgan pipeline expansion. No exponential increase in tankers, killing off whales and threatening our waters and coastlines. No massive clean-up bills falling on the public purse, while the politicians and oilmen bicker over the money and the power between themselves. Shame on both Notley and Kenney.

We need renewable energy expansion now. No more fossil fuel expansion. We have one decade to shift. Let's go.

Mr. Trudeau's pre election pledge...."We will wean Canada off of fossil fuels." Then? "We can't leave it in the ground." Then he bought a pipeline."

When news of the unfunded

When news of the unfunded liabilities broke last week, it did not affect the industry's share prices. Bay Street appears to assume that companies will get off the hook somehow, leaving taxpayers to clean up the mess. Sadly, that is the normal mode of business in Canada's extractive industries.

When and how did the

When and how did the government address the issue? By "improving practices"? Let's see the details. This smacks of a government that's been captured.

In some ways, it doesn't

In some ways, it doesn't matter if they debate it or not. When the NDP were elected in 2015 this was one of a number of well kept secrets that began to emerge. At the NDP convention in Calgary in 2016 some party members circulated a paper detailing the large number of abandoned wells. I was told at that time, by a Star reporter, that her audience wouldn't be interested in the mess.

It's heartening how quickly that assessment was overturned and the Star involved itself in researching the situation. It's less heartening that the NDP, the unwitting inheritors of a 44 year old Conservative alliance with Big foreign oil companies, have decided to out Tory the Tories and declare it a non-emergency.

It may be something we can down load onto our children and grandchildren...certainly that has proved to be the way of Advantaged Albertans. But it is disheartening to see a social democratic party...however threatened by the return of the dark money crew........choose silence over open discussion and debate.

The mess exists. And keeping it secret is just another small piece of Fossil Fuel denialism. Time to give up the superstition that 'what we don't know won't hurt us'. And thanks to David Swann for being the excellent representative he is.....remembering that its easier to do that when not in power.

Someone in Ottawa should call for this same debate and see who the silencers turn out to be.

Having the NDP and the Cons

Having the NDP and the Cons agree on this issue should send shudders down the spine of any conscientious voter.

Nothing new here. It is well

Nothing new here. It is well established that under a capitalist system especially in a petrostate the politics of distraction will ensure profits and wealth be forever privatized while costs are socialized. Any notion that voting under this reality will lead to a significant paradigm shift should be dispelled by the response of the NDP government and conservative "opposition". They are merely two sides of a coin acting on behalf of the same masters.

Congratulations to Dr. Swann for having the intestinal fortitude to demand action on something so dangerous to our health and our environment for generations to come.