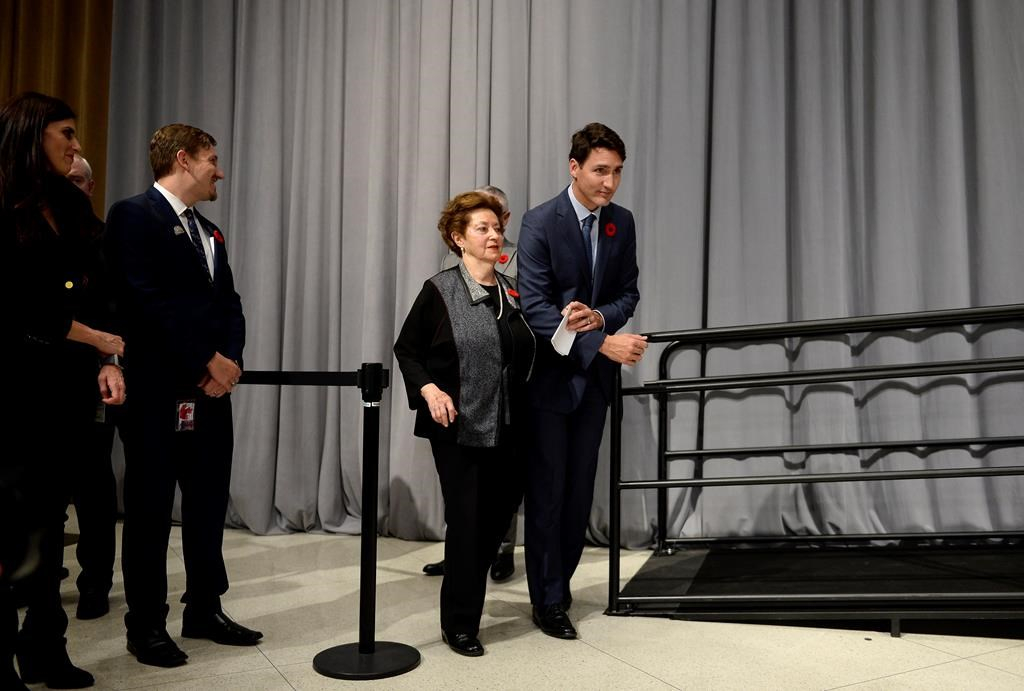 Prime Minister Justin Trudeau walks with Ana Maria Gordon, who was four-years-old when she travelled on the MS St. Louis, on Parliament Hill in Ottawa on Nov. 7, 2018. Photo by The Canadian Press/Justin Tang
Previous story

Prime Minister Justin Trudeau vowed Wednesday that his government will do more to protect synagogues and other places of worship from violence as part of an apology for anti-Semitic policies that denied refuge in Canada to Jews fleeing the Holocaust.

The prevalence of anti-Semitism showed itself almost two weeks ago when a gunman killed 11 worshippers inside a Pittsburgh synagogue simply because they were Jewish, Trudeau said.

The ensuing days have seen countrywide vigils and calls for the government do to more through a federal program that funds security improvements at places at risk of hate-motivated crimes, such as synagogues.

"I pledge to you all now we will do more," Trudeau said, without providing more details.

Shimon Koffler Fogel, CEO of the Centre for Israel and Jewish Affairs, said in a statement that his organization would work with the government on the details of the pledge "and on other practical policies to combat anti-Semitism in all its forms today."

The head of Friends of Simon Wiesenthal Center, Avi Benlolo, said it is up to governments to "take serious measures that help counter hate crimes against minority groups."

It was 79 years ago that the government of William Lyon Mackenzie King rejected an asylum request from an ocean liner carrying more than 900 German Jews as it neared Halifax, forcing it back to Europe.

Most of the passengers scattered across the continent and more than 250 of them died in the Holocaust.

A handful of surviving passengers from the ship were on hand in the House of Commons to hear the apology and opposition parties' responses.

Between 1933 and 1945, Canada admitted the fewest Jews of any Allied country, Trudeau said. Of those Canada did let in, some 7,000 Jews were held as prisoners of war and jailed alongside Germans captured on battlefields, he said.

Opposition party leaders also called Canada's policies at the time unacceptable in speeches on the week marking the 80th anniversary of what is known as "Kristallnacht. In November 1938, Nazi agitators attacked Jews and vandalized synagogues and Jewish-owned businesses, scattering broken glass that glittered in the streets like crystal.

The rejection of the St. Louis the next year helped Hitler sell his "final solution" that ended with the murders of six million Jews: Jews couldn't be expelled from German territory because nobody would accept them.

"The whole premise of the St. Louis was the culmination of bigotry and hatred that is rearing its ugly head again and I think this is a very poignant part of this," said Eva Wiener, who was a child aboard the St. Louis.

Conservative Leader Andrew Scheer said the apology for past wrongs should be a reminder that anti-Semitism "is not a relic of the 1930s.

"This apology should not make us comfortable. On the contrary, it should grab us and shake us. It should be an alarm that jolts us out of our daily routines and demands that we look at our world today through the lens of that experience."

Guy Caron, who leads the NDP in the House of Commons, said hints of the racist policies that helped Hitler rise to power can be seen around the world. He called for a focus on tackling anti-immigrant and hate speech, particularly online.

Liberal MP Anthony Housefather, who first called for an apology for the St. Louis incident, said politicians needed to call out any racist talk even if it comes from their own supporters.

"There is speech out there that we tolerate — that we sometimes nod-nod, wink-wink to ... and we shouldn't be tolerating that speech," he said outside the House of Commons.

The story of the St. Louis gained renewed attention last year when picture and stories of the victims circulated on social media in response to U.S. President Donald Trump's decision to ban immigration and refugee settlement from certain countries.

The Liberals' new immigration plan calls for up accepting to 16,500 protected persons in 2019, a category that includes refugees, growing to 20,000 in 2021. Critics say the figures are far too low while debate rages about "irregular" border crossers walking over from the United States.

The Canadian Council for Refugees said many refugees trying to get into Canada are often fleeing persecution just like the St. Louis passengers.

"History will judge us by whether we respond in ways that respect the rights and dignity of refugee claimants, just as we today judge those who turned away the St. Louis and other Jewish refugees," the council said.