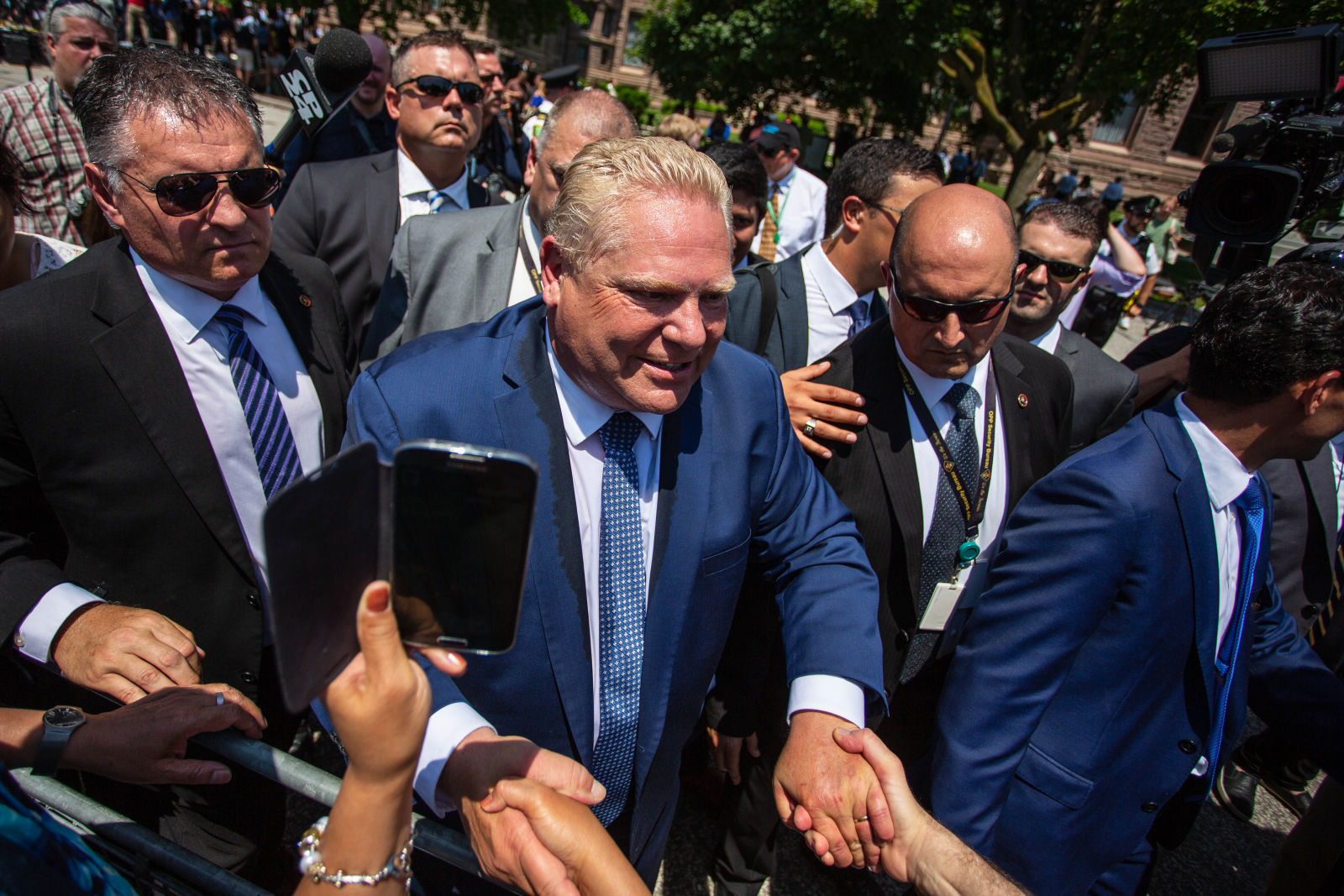 Ontario Premier Doug Ford shakes hands with members of the public after he was sworn into office in Toronto on June 29, 2018. File photo by Alex Tétreault
Previous story

Following a chorus of outrage, Premier Doug Ford is offering an olive branch to Franco-Ontarians, the provincial government announced in a statement released late on Friday afternoon.

The controversy erupted when the government announced in an economic update on Nov. 15 that it was cutting the position of the French language services commissioner, an officer of the legislature, and merging the role into the office of an existing ombudsman. The government also announced cancellation of plans for a new French-language university.

Franco-Ontarians responded with fury, including a member of his own caucus, Amanda Simard, who noted in a message on her Facebook page that she was "upset" and pushing the government to reverse the decisions.

The premier backtracked partially Friday, offering to amend proposed legislation after days of criticism that spread to the House of Commons where the governing Liberals, led by the minister responsible for official languages, Mélanie Joly, taunted the Opposition Conservatives, urging them to join the federal government in denouncing Ford's actions.

One of the changes would allow the commissioner to keep their title under the ombudsman's office and "maintain independence in conducting investigations" as well as to make recommendations to improve French language services in the province. Ford also proposes to create a new Ministry of Francophone Affairs that would be led by Justice Minister Caroline Mulroney, and to hire a senior policy advisor in his own office with responsibility for francophone affairs.

"I want to thank my all-star minister, Caroline Mulroney, for her advocacy and all the people who reached out to my office, and to me directly, to share examples about the contributions of the Franco-Ontarian community in our province," Ford said in the news release.

"They're fighters. They're part of the history of Ontario. They continue to work hard for generations to promote and preserve their beautiful culture and language in our province."

But the government is not reversing its decision to cancel plans for the French language university, saying that it cannot afford to do so.

"I am looking forward to the day where we are in a financial position to proceed with projects like the French language university — projects that serve to unify our community and preserve our language and culture," Mulroney said in the same statement.

There are more than 600,000 Franco-Ontarians in the province of about 14 million people.

"I will continue to be a tireless advocate for the university, by and for francophones, so that when we are in a position to proceed with the build, we will be ready to go," Mulroney added. "While the fiscal realities of our province's finances prohibit a new standalone French Language University right now, I will continue to support models of education that meet the needs of francophone students and the francophone community."

Interesting to see Premier Ford pausing in his headlong march to total power to wipe the egg from his face in response to the Franco-Ontarion (and I hope, the Anglo community as well) outrage.

It is symptomatic of this government to retrench, retreat and withdraw - when it should be striking out boldly to find imaginative new solutions for the problems facing us. Cutting off the voices of a significant, and culturally vital part of our polity is like cutting off a limb. It is crippling. The PC present the face of fear to our population - not a good sign of leadership. Instead of cancelling the French language university Ford's lack-wit caucus should have been seeking out imaginative new methods and technologies to deliver the service. It is still possible to start small, to grow thoughtfully and organically and to advance the agenda of French language and culture in Ontario. We will all be the richer for it.
Issues like the granting of degrees can be managed by initially allying the new institution to one of the more established schools which can support the growing process of adminstration and help the academics hit the ground running so that quality and sustainability are fostered.

The PC's overriding attitude of cowardice is so dispiriting in this time of existential challenge that they are in danger of proving their unfitness to lead.