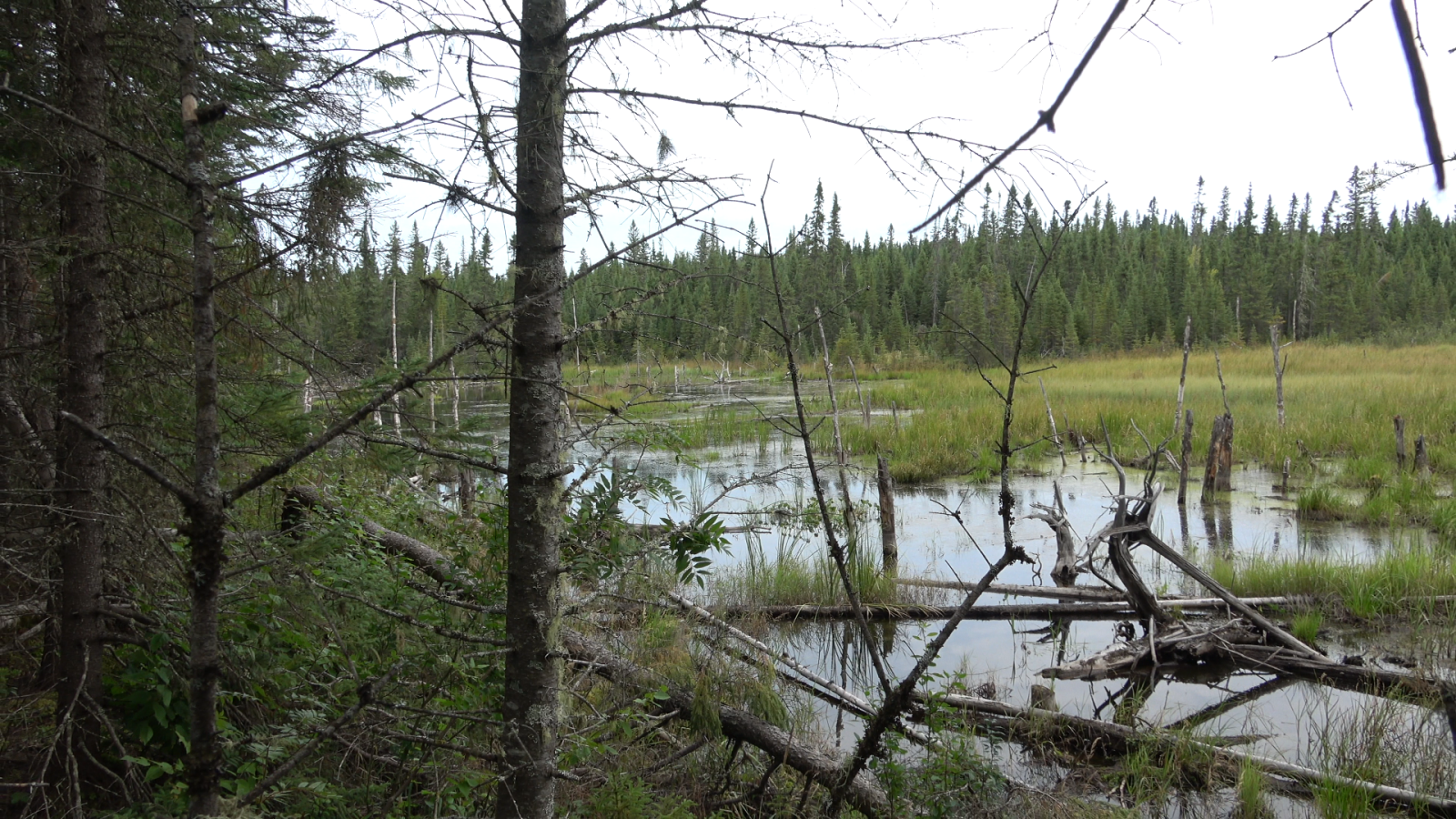 The site of Authier lithium mine in Quebec's Abitibi region, 6km north of La Motte. Screenshot from a video made on Aug. 31 2018 by Marc Nantel
Previous story
Next story

A proposed open-pit lithium mine in northwestern Quebec has triggered community tension and calls for the provincial government to order an independent environmental review with public hearings.

An Australian firm, Sayona Mining Ltd., is the proponent that is proposing to build the Authier lithium mine project.

Some residents and environmentalists who live nearby say they are worried most about whether the proposed mine, planned at the foot of the Saint-Mathieu-Berry esker, a geological formation of glacial rocks in the Abitibi-Témiscamingue region, would jeopardize their local water supply. One of the opponents has also accused the Australian proponent of trying to "intimidate" those calling for an independent environmental review during a press conference. Sayona has refuted this allegation.

Layers of sediment, sand and rock in the Saint-Mathieu-Berry esker naturally filter rain and snow and provide pristine drinking water to six local municipalities, including about 13,000 residents of the town of Amos. The esker's water is also bottled and sold as natural spring water by ESKA water. The company employs more than 125 people at its local bottling factory, according to a report in local publication Le Citoyen Val d’Or Amos in February. ESKA did not reply to National Observer’s requests for an interview.

Sayona says the mine will be separated from the esker by bedrock and will have no impact on the potable water of the esker.

Mining projects that extract more than 2,000 tonnes of ore per day are automatically subject to an independent review. In May, Sayona reduced its planned daily extraction target to 1,850 tonnes in order to speed up the development process and bypass the obligatory hearings.

However, thanks to an amendment to Quebec’s Environment Quality Act, the Quebec environment ministry can order a review, regardless of a mine's daily tonnage.

The site is about 570 kilometres northwest of Montreal and would create 132 jobs once in operation.

The waste rock and tailings pile is planned 20.2 metres away from the esker, and 17 per cent of the project is destined for wetlands that are home to a host of birds and animals, including the vulnerable rusty blackbird.

Élise Blais-Dowdy, spokesperson from the Citizens Committee for the Protection of the Esker (CCPE), told National Observer on Nov. 21 that the group wants to see the project undergo “necessary, vigorous evaluations in order to find out whether it makes sense environmentally. And we don’t want [Sayona] to leverage the climate crisis to accelerate processes for the project’s acceptance. We see a real contradiction in that.”

A proposed lithium mine near a fresh water source in Quebec has angered residents and is putting the province's new environment minister under mounting pressure, reports @cecilia_keating #qcpoli #envpoli

She was referring to the fact that lithium is a key component in electric vehicle batteries. The metal is also used in laptops, tablets and mobile phones.

The lithium market is booming, largely thanks to the growing electric vehicle market. A report published this year by management consultancy firm Hoskills showed that in 2017, the automotive sector used more than 34,000 tonnes of LCE (lithium carbonate equivalent) and predicted that the figure would double in the next 10 years.

Mayor resigned over council's u-turn on mine approval

Among others calling for an environmental review are the Regroupement Vigilance Mines de l’Abitibi-Témiscamingue (REVIMAT) and a group representing citizens of La Motte, the village closest to the mine site.

The groups are calling on Environment Minister MarieChantal Chassé to subject the project to an independent review by Quebec’s environmental review agency, the Bureau d'Audiences Publiques sur l'Environnement (BAPE). This type of review involves public hearings where citizens voice their concerns.

Liberal MNA Marie Montpetit, opposition critic for environment, told reporters in the National Assembly on Tuesday that it was "beyond comprehension to see a minister of the environment dithering on whether to do a BAPE for a lithium mine that is a few metres away from the most drinkable water source in the world. I mean, it's fundamental, it's basic."

The mine has catalysed controversy in La Motte, a small town of 450 people, throughout 2018. In September, the town mayor resigned citing "exhaustion" after members his council voted in favour of the project, without a rigorous environmental assessment, while he was away.

Réjean Richard became the town's new mayor on Nov. 28. He told Le Citoyen Rouyn Lasarre in an article published on Wednesday that his council was in favour of Authier, and that "it is not up to us to decide whether the project should go before the BAPE, it will be up to the Minister of the Environment to do so. As long as Sayona acts in accordance with the laws and rules in place, that's all that matters to us."

A series of information sessions held over the summer in La Motte and other towns near the proposed mine were rowdy and tense. Rodrigue Turgeon, a spokesperson for the CCPE, likened the "packed" sessions to a "sports match." He said each time a citizen pressed the mine representatives for an environmental review, "everyone stood up​ cheered and applauded."

Turgeon said that his group is not necessarily against the project. "We just want more information," he told National Observer.

The information sessions were acrimonious due to "bad communication" by the mining company and its evasion of citizens' questions, says Marc Nantel from REVIMAT. "There was never any responses beyond 'we will respect the law.'"

That's why a review is necessary, Nantel told National Observer on Nov. 21. With a "more rigorous and structured analysis," he said, it "won't be a case of 'let's dig a hole and see what happens.'"

He flagged that a review does not typically put an end to a project. "So why not do one, if it's going to put citizens' minds at rest about things like dust, contamination, wetlands, noise, all the while creating a better framework for the mine?"

A recent survey of La Motte residents demonstrated that 151 citizens, or about half of eligible voters, were in favour of the provincial government launching an independent environmental review. Of that number, 50 said they were against the mine outright.

Martine Chatelain, spokesperson for Quebec water protection non-profit Eau Secours told National Observer on Nov. 22 that she, too, would like to see the project subjected to extra checks. “That esker is a huge source of drinking water for the region, and it is at a big risk of contamination now. We are talking about a very big open-pit mine, a kilometre wide. The mine is going to need a huge amount of water. There are risks of contamination through the sub-soil.”

She said she was also concerned that Sayona would not be able to clean the “huge amount of water” the mine would need for its operations before putting it back into the environment. “That is also a big question. It’s a question that a BAPE can answer. When there’s no BAPE, everything is left to the good will of the mining company. And that’s why people are demanding a BAPE.”

When asked on Nov. 21 by National Observer whether the ministry would call for the formal hearings, the minister's press attaché Louis-Julien Dufresne said no interviews on the topic be granted. All decisions will be made 90 days after Sayona submits applications for its permits, he said.

Sayona will submit its applications within “the next few weeks” according to company spokesperson Alexis Segal. He told National Observer on Nov 22 that the company planned on making the demand “in the next few weeks,” with a view to starting construction in September next year. The hydrogeologists hired to evaluate the project showed the project would have no impact on the drinking water of the esker, he said. Sayona's reports demonstrate the esker will be upstream from the mine and separated from it via bedrock.

While there is the possibility the life of the mine will be extended beyond the 18 years currently planned, Segal said it will never supersede the maximum daily limit of 2,000 tonnes of ore. He said the fact that it is a "slow project with a longer life" benefits contractors and future employees.

He also said that the company is planning to open a community office in La Motte in the coming weeks, and hire a local sustainable development director. That way, "people can share their worries and have access to information."

'An atmosphere of intimidation'

At a Quebec mining convention, held in Montreal Nov. 19-22, proponents of the mine created “an atmosphere of intimidation," according to the CCPE's Rodrigue Turgeon, who held a press conference about Authier on the second day of the convention.

Renaud was the chair of the BAPE until 2010, when his term was abruptly ended by the incumbent Parti Québécois government when he clashed over his pro-shale gas stance with then environment minister Daniel Breton. Between 2001 and 2007, Renaud was vice-president of Conservation de la Nature, a group financed by oil and gas companies, such as Shell, Suncor Energy Foundation and Alliance Pipeline Limited.

“They were filming everything I said with their iPhones, about one foot from my face,” he told National Observer. And when he fielded questions from journalists, the representatives encircled him, he said. “There was the lawyer there telling me we didn’t have the right... There was a real atmosphere of intimidation.”

"What I really saw [at the congress] is the power of money compared to the power of the population's will," he said.

Sayona's Segal told National Observer Thursday that he was "stunned" by Turgeon's allegations. "When Sayona does an event, the people from the CCPE go too. It’s the same thing. I think it’s a democracy. if you have a press conference, you don’t have to hide anything,” he said.

Editor's note: This article was updated at 10:41 p.m. ET on Nov. 29 to correct that the former mayor of La Motte resigned earlier in 2018 after his council voted in favour of the project, and not because the council had voted to oppose the project.

I hope Quebec has more sense

I hope Quebec has more sense than to allow this. Mining companies throw money and the promise of (a few) jobs at small communities. They don't mention the inevitable drastic and irreparable damage that would result - or the huge future company profit, which is all they seem to be able to see,