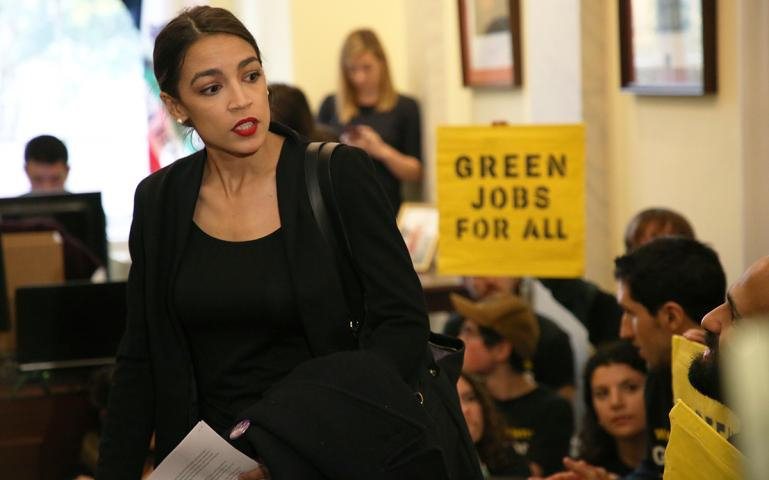 Like a lot of people in Canada, I was pretty shocked when I saw five of Canada’s most infamous conservative leaders grace the front cover of Maclean’s under the banner of “The Resistance.” As a Cree man, the term drums up images of resistance leaders of old like Louis Riel or Cree Chief Big Bear, so it was ridiculous to imagine that the collective power of Jason Kenney, Andrew Scheer, Brian Pallister, Scott Moe and Doug Ford could resist anything other than social progress. But, more importantly, I couldn’t help but wonder... if these guys are the resistance to climate action in Canada, who are they actually resisting?

It’s true that Kenney, Scheer, Pallister, Ford and Moe are the worst of the worst when it comes to climate change and respecting Indigenous rights. But, when their so-called opponents are pushing pipelines and trying to sell us massive increases in fracking as climate solutions and reconciliation, we have a bigger problem on our hands.

According to this fall’s Intergovernmental Panel on Climate Change report, Canada needs to stop digging up new oil, coal and gas and make bold moves towards a 100 per cent renewable energy economy. And, we need to get there within the next two decades.

If we fail to do this, we’ll be on track to warm the planet more than 5ºC, bringing widespread drought, wildfires, extreme heat, more extreme weather, rising seas and worse to Canada and to the world. We need a bold, progressive vision for climate action that acknowledges what the science is telling us and understands that it requires us to create a new social contract that supports workers, families and vulnerable communities as we do this transition on a timeline. We need something like the Green New Deal that’s been gaining steam in the United States.

The Green New Deal, catapulted onto the national agenda by a fiery mixture of political champions like Alexandria Ocasio-Cortez and mass youth-led organizing by the Sunrise Movement, is perhaps the most straightforward policy proposal for tackling climate change that many of us have ever seen.

And, like it’s post-Great Depression namesake, it’s a bold economic policy that takes care of the most vulnerable among us. As the signs that young people across the U.S. have held during countless protests supporting this Green New Deal say, it boils down to two key demands: Good Jobs and a Liveable Future.

That’s the same thing we need here in Canada – a climate plan that stops fossil fuel expansion, gets us to 100 per cent renewables and guarantees a good job for impacted workers. And, it has to do it all in full partnership with Indigenous peoples.

This won’t mean turning the taps off overnight in places like Fort McMurray, but it does mean that we cannot build massive new fossil fuel expansion projects like the Teck Frontier Mine in the Alberta oilsands, the Trans Mountain pipeline, the LNG Canada facility in B.C. or offshore oil rigs by BP (yes, that BP) off the coast of Nova Scotia.

And, if we’re going to do what the science says we need to do and stop expanding fossil fuels, we need a plan to transition to 100 per cent renewables within the two decades. For that, we need the federal government to step up and guarantee that every single worker, family and community impacted by this transition will be supported. The best way to do that is to borrow from the Green New Deal and implement a federal job guarantee that tells every single person in Canada that they don’t have to choose between putting food on the table and ensuring our children inherit a liveable planet.

This kind of climate plan would ensure that Indigenous peoples have the ability to continue to hunt, fish, gather, practice ceremony and build sustainable economies on an adequate land base and it would support the restoration of lands despoiled by the fossil fuel economy. Put another way, a climate plan built on this basis could make good on so many politicians’ hollow promises around the United Nations Declaration on the Rights of Indigenous Peoples and the ninety-four calls to action in the Truth and Reconciliation Commission report.

This doesn’t have to be a pipe dream. In the United States, they’re calling it a Green New Deal, but I have a simpler name for it here in Canada – The Good Work Guarantee.

It’s called the Good Work Guarantee because that’s exactly what it is, a guaranteed good job for workers connected at the hip to a climate policy that moves Canada off of fossil fuels and respects Indigenous rights. And, despite what our political leaders tell us, we have every reason to believe that this kind of bold policy is possible here in Canada.

According to a 2010 report from the National Roundtable on the Environment and the Economy, climate change will cost Canadians between $21 billion and $43 billion a year by 2050. In extreme scenarios, that cost is closer to a staggering $90 billion.

Refusing to act at scale won’t eliminate these costs, but transfer them onto the shoulders of cities, provinces, Indigenous communities, small businesses and everyday people all across Canada.

On the flip side, a proposal from Canada’s Green Economy Network to create a million climate jobs would cost less than 5 per cent of the annual federal budget, a significant portion of which could be paid for by ending subsidies and incentives for fossil fuels and instead using those resources to drive the transition.

Polling continues to tell us that more than three quarters of people in Canada believe that climate change is a serious problem and two thirds think we have a moral duty to do more to address it. According to another poll, nearly that many people – 60 per cent – are worried that Justin Trudeau’s carbon price won’t bring down emissions and nearly a quarter of people in Canada don’t think any political leader has a climate plan that does enough.

There’s also massive support for a Good Work Guarantee-style policy among both energy workers and the broader public. In 2016, the energy worker non-profit Iron & Earth released polling that found that nearly 70 per cent of energy workers support a time-bound transition to 100 per cent renewable energy in Canada. That same poll found that between 80-95 per cent would support government programs to support workers through that transition. Within the general public, these numbers are even higher.

And, many First Nations’ elected leaders have said they would not have signed pipeline or oilsands deals if there were federal incentives to support economic pathways into the renewable energy economy.

We’ve run out of time to implement small changes and incremental solutions, and instead need a bold, progressive vision for tackling climate change and reconciliation in Canada. The good news is, we can do it. We have the knowledge, the resources and potential to transform Canada from one of the world’s highest per capita emitters into a global leader in building a 100 per cent renewable energy economy in partnership with Indigenous Peoples.

Elizabeth May: Would Canadian politicians have fallen over themselves to save the horse and buggy?

It all comes down to our

It all comes down to our elected representatives having the courage to do what we all know we must do and refusing to bow down to rich Industry players who constantly say we can't.

Excellent idea. We need a

Excellent idea. We need a new social contract, and we need a liveable future.

Good work guarantee-- this is

Good work guarantee-- this is key, and it fits with Green New Deal, but expresses everyone's desire for good work. Good work -- based on renewable energies. Well written and expressed. Now to get that leader who expresses this and is charismatic and non-deviating from the true path.