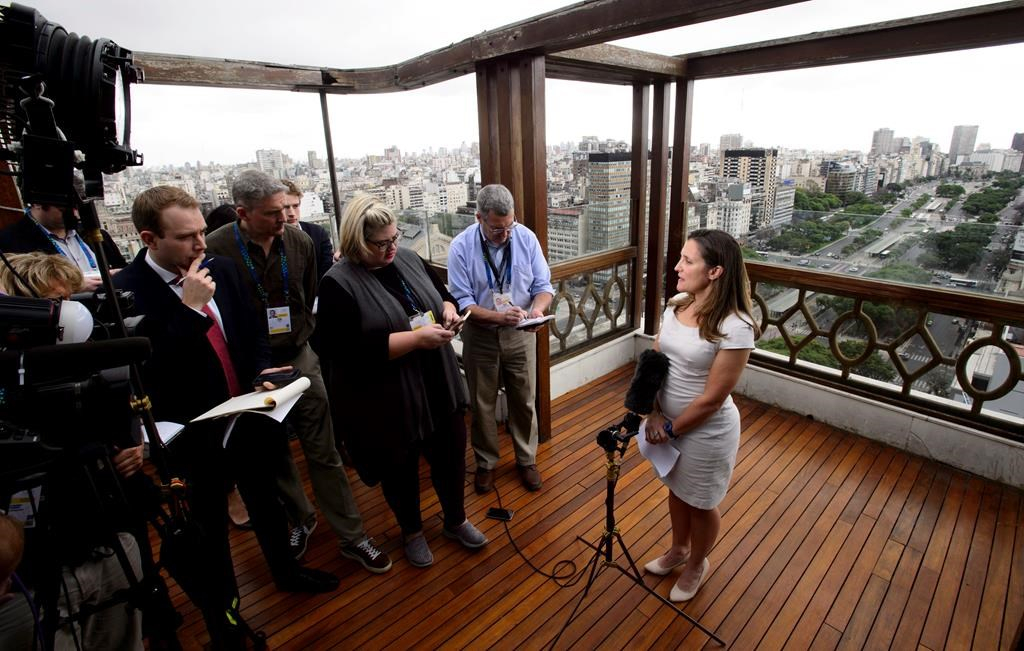 Minister of Foreign Affairs Chrystia Freeland speaks to media on the roof of the Panamericano Hotel in Buenos Aires, Argentina on Thursday, Nov. 29, 2018., to attend the G20 Summit. Photo by The Canadian Press/Sean Kilpatrick
Previous story
Next story

Canada will sanction 17 Saudi Arabian nationals linked to the October killing of journalist Jamal Khashoggi, Foreign Affairs Minister Chrystia Freeland said Thursday — a move announced on the eve of the G20 summit to be attended by the kingdom's crown prince.

The federal government looked closely at the involvement of each person it sanctioned, Freeland said, and concluded they were either directly involved or complicit in Khashoggi's October murder at the Saudi consulate in Istanbul. The dissident writer, who lived in exile in the United States, went to the consulate in Istanbul to get papers for his impending marriage and didn't come out.

The sanctions freeze the targets' Canadian assets, she said, and make them inadmissible to Canada.

Earlier this month, the United States imposed its own sanctions on Saudi officials for the same reason.

"The murder of Jamal Khashoggi is abhorrent and represents an unconscionable attack on freedom of expression and freedom of the press," Freeland said.

Canada walked a fine line as it unveiled its sanctions on Thursday, not making a direct link between Crown Prince Mohammed bin Salman and the writer's murder in Freeland's public remarks or in documents associated with the announcement.

Freeland defended that position, saying Canada wants a credible, transparent investigation to identify all involved in an act "so serious and so odious" as Khashoggi's death.

"It's very important to act and to speak only on the basis of real certainty," she said. "These are not steps that we take lightly, they are not accusations that we can make lightly."

Canada and other countries face the difficulty of how to handle bin Salman, known as MBS, at the G20 summit set to begin Friday.

The trip is the highest-profile overseas junket for the crown prince since Khashoggi's murder and it is expected to be an opportunity for other leaders to press him on what happened and why.

Freeland would not say whether Canadians will speak with Saudis during the meeting of the world's top economic leaders in Buenos Aires.

As part of an examination of Khashoggi's death, the head of Canada's spy agency was dispatched to Turkey earlier in November to gather information and listen to a recording Turkish authorities have of Khashoggi's killing.

The Trudeau government has faced calls to cancel the armoured-vehicles contract but the prime minister has said the penalty for doing so would be "in the billions of dollars."

The federal NDP said Thursday it plans to press the Liberal government to "have the courage" to move beyond sanctions to the immediate cessation of all arms sales to Saudi Arabia.

It has been over a month since the prime minister announced the government is reviewing current export permits to the kingdom, said the New Democrats' foreign-affairs critic Helene Laverdiere.

"This belated and timid response from the government does not address the full scope of challenges in Canada's relations with Saudi Arabia," she said.

Amnesty International Canada also welcomed the sanctions — and also said that banning further shipments of armoured vehicles should be part of Canada's response.

In Buenos Aires, Freeland repeated that Canada is reviewing arms sales to Saudi Arabia in view of Khashoggi's murder, incredible explanations of his death offered by the kingdom so far (from denying he was dead to saying it was the fault of rogue Saudi agents), and Saudi participation in the civil war in neighbouring Yemen.

"During this period of review, no new arms export permits are being issued," she said.

The president has faced accusations of ignoring U.S. intelligence that concluded, according to a U.S. official, that it was likely the crown prince himself ordered the killing.

Several lawmakers have asked the CIA and other top intelligence agencies to say publicly what they have told the president about Khashoggi's death.