From climate change to Auschwitz and back: a journey into dark and light 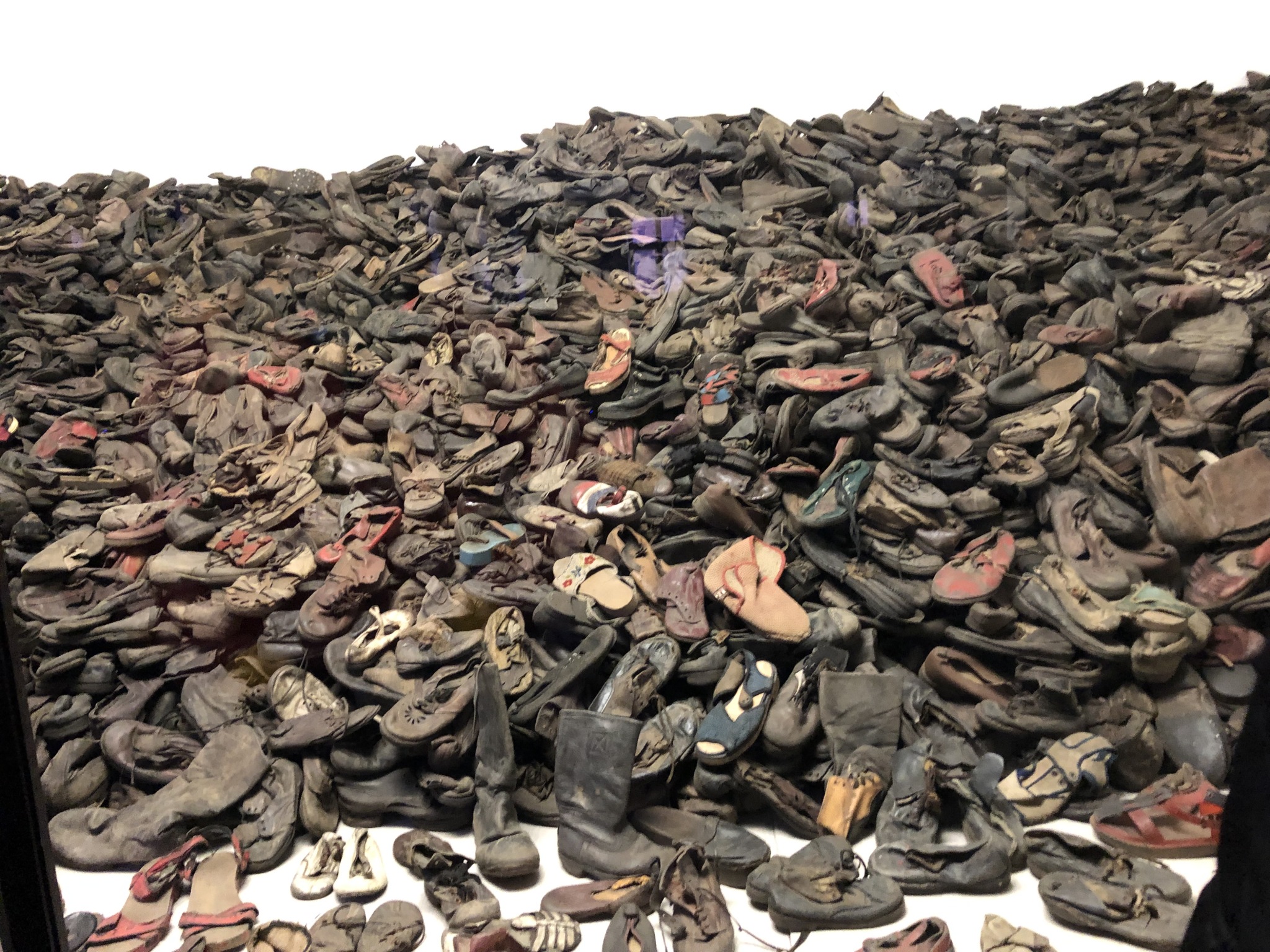 The German climate expert standing beside me sobs silently. His big shoulders shake as tears stream down his face. We are at Auschwitz, one of the Nazi death camps from the Second World War in a room full of ... hair.

We walk silently past the mounds of hair, exit the room and enter one piled with glasses. It’s in the room filled with children’s shoes that I feel my heart crack open and I am blinded by tears, imaging the horror of the thousands of parents torn from their children. Our Polish guide explains the sorting process and eventually leads us into the gas chambers showing us where thousands were made to strip before being shown into the showers. Seven hundred people at a time crowded into a small cement room, never to leave. In the ceilings are small holes, and he explains how the gas canisters were dropped through the ceiling.

Anything of value was taken to the “Canada” warehouse, named because it was considered the land of plenty. Guards would come here, choose clothing that they might take home to their own children at night, after watching over the murders of thousands of others' children in the camp every day.

He talks about how it was possible that these people ran the death camps and then went home to their own families. He talks about the fear people had about their own families, their livelihoods and security and how the Nazi’s played on that fear and directed it against Jews. They made it seems as though the Jews were scheming to take away their livelihoods, to threaten them. They taught people to fear difference and eventually to be blinded to the humanity of those they killed. He takes us to a building where scientists led experiments on Jewish and Gypsy women as though they were lab rats.

Some of my family is from Poland. My Bubi (grandmother) escaped these atrocities. Others I knew well growing up like my neighbor were not so lucky. I remember talking to my neighbor as a child, tracing her tattooed number on her forearm and asking her why she wasn’t having it removed. She told me she wants to remember what she had survived and how we all need to remember and learn from history.

Our guide ends our visit by thanking us for taking the time to come here, to show respect for the murdered to remember what happened here. “If we want to avoid the rise of ideologies that lead to these atrocities we must learn from history and we must not be silent.”

"I remember that tonight is the last night of Hanukkah and millions of Jews around the world, including my own family, are lighting their menorahs. Indeed, let there be light," writes @tzeporah about her visit from COP to Auschwitz

I ponder his words as we make our way back to Katowice. I think of what’s happening in Yemen where, according to the UN Human Rights Council 11.3 million people are currently in acute need and require immediate assistance to survive.

I think of The United States army gassing families in the migrant caravan from Central America as they tried to enter America. I think of the reports here at COP24 that more people will lose their homes now to climate change than to war. How hundreds of thousands have died this year due to climate related extreme weather, droughts, fires and floods. I think of my own country, Canada - a wealthy nation increasing oil and gas production at this moment in history when the recent IPCC report warned that to ensure warming does not surpass 1.5C we must reduce emissions from all sectors and countries dramatically. That at 1.5C the proportion of the global population exposed to water stress could be 50% lower than at 2C and that food scarcity would be less of a problem and hundreds of millions fewer people, particularly in poor countries, would be at risk of climate-related poverty.

Numerous studies have shown us that environmental scarcity can and has led to violent conflict. It has and will continue to lead to fear. We cannot ignore the rise in populism we are seeing in the critical moment when millions need globalism to survive. Yes, we must remember and learn from history. The path forward will not be easy and it requires us to speak up about injustice. To connect the dots between our actions at home and the plight of millions around the world who are the most vulnerable to climate change requires us to be our best selves. Remembering a dark time when ships of Jews were refused entry around the world as they fled persecution must motivate us to step up to address the needs of those today who are fleeing persecution and scarcity.

As we leave the gates of Auschwitz the sky is a gloomy gray. It matches the somber mood of our group of fifty. We wander away from each other, everyone taking time in silence to process what we have seen. Eventually we drift back together, huddling in groups. We don't talk much, but it is reassuring to be near each other. We scan the long line ups, waiting to get in to Auschwitz, agreeing that it is good so many people have come from the United Nations climate conference to experience this. As the bus takes us back into the city of Katowice the sun comes out for the first time in a week, briefly illuminating the UN conference center. I remember that tonight is the last night of Hanukkah and millions of Jews around the world, including my own family, are lighting their menorahs. Indeed, let there be light.

How I wish we had the courage

How I wish we had the courage to change the things we can.

If I may quote myself, from a

If I may quote myself, from a poem I wrote a while back & read as part of my sentencing statement after being convicted of criminal contempt for blocking the TransMountain pipeline gate:

Our prime minister's scouring
the Arctic for natural resources—
zinc and copper, nickel,
lead—her whole hoarded mineral wealth
to be ripped from the thawing earth
and shipped to China
and I can't help but think of the gold
pried loose
from my grandfather's teeth, the hair
yanked free
from my grandmother's scalp,
the fat they rendered
from my cousin's plump tuchus.
Never again—we promise each other
after every new debauch
and might even mean it for that moment
but we don't know how
to stop, dear planet,
we are sore in need of help.
...

Climate change is the Four

Climate change is the Four Horsemen of the apocalypse that book of Revelations predicts. Some people will hoard, they will be attacked by those that do not have enough which will lead to wars, there will be starvation and death. Due to the inability to correctly dispose of corpses there will be disease and a never ending cycle will begin. Don’t think I am religious I am just dismayed at people’s indifference to what happens to generations after us. No government seems bold enough to take the first step to prevent climate change.