CO2 vs the COPs 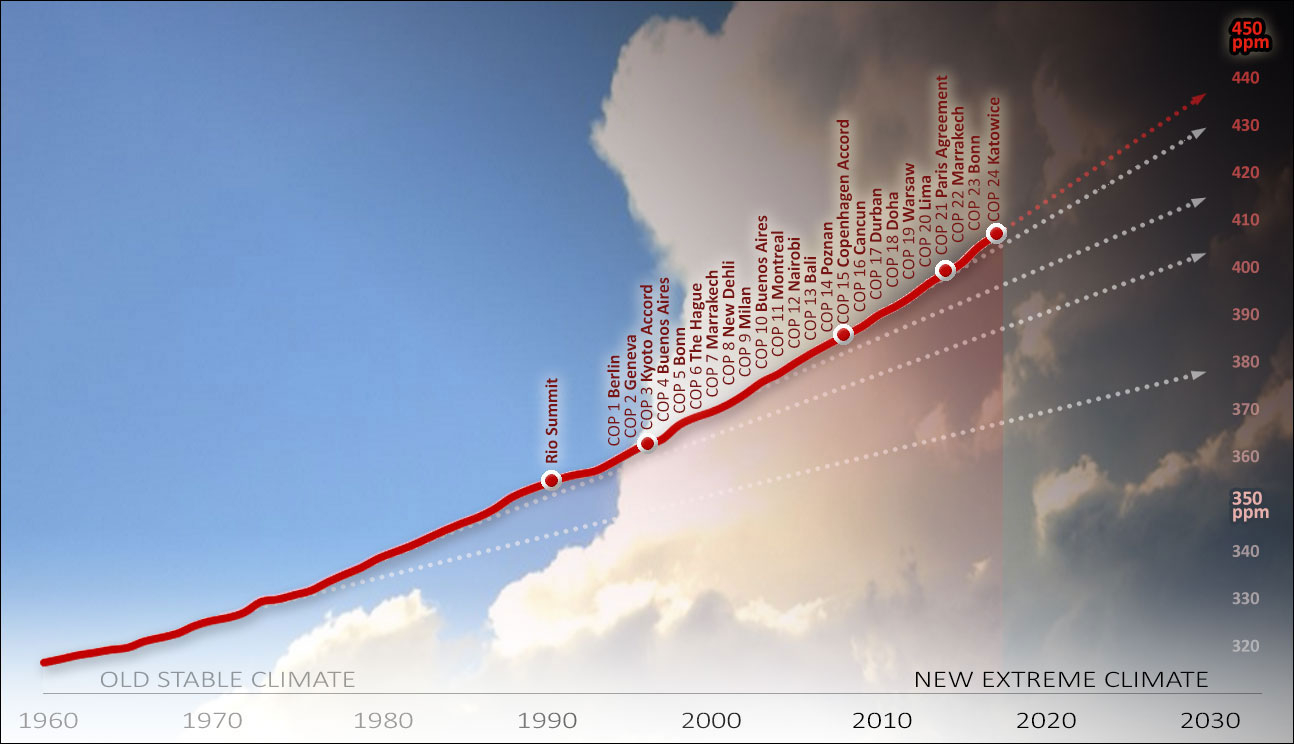 “Whatever our world leaders are 'doing' to reduce emissions, they are doing it wrong."

"We have to understand what the older generation has dealt to us, what mess they have created that we have to clean up and live with.”

The primary force overheating our planet, destabilizing our climate and acidifying our oceans is the surging levels of carbon dioxide in our atmosphere.

Since 1990, at the Rio Summit, world leaders have met annually and pledged to stop this "speeding freight train" before it gets too dangerous. Right now they are meeting in Katowice, Poland, for the twenty-fourth year in a row, at a United Nations Conference of the Parties (COP 24).

Despite these decades of global promises and negotiations — on climate policies, emissions targets, clean energy and efficiency — CO2 levels have not stabilized. Not only are emissions still rising, they are actually accelerating upwards.

That's the dismal story revealed by the most recent CO2 data from the United States National Oceanic and Atmospheric Administration (NOAA). Take a look.

The bold red line in my chart above shows the level of CO2 in our atmosphere since 1960. I've added all twenty-four of the United Nations COPs in the year they happened.

To appreciate how fast CO2 levels have been accelerating, look at the dotted lines. Each one shows the average rate of increase for a different decade. Instead of reducing our pollution pace since the COPs started in the early 1990s, we've increased it more than fifty per cent.

Despite decades of global promises and negotiations CO2 levels have not stabilized. Not only are emissions still rising, they are actually accelerating upwards.

You can see why kids like Greta have become so frustrated and angry. We are literally accelerating their generation into a chaotic climate future, and doing nothing meaningful to stop it.

"We have let down the young generation, and they know it, and they are angry." -- Sir David Attenborough speaking at COP 24.

There is no mystery about where all this new CO2 is coming from — fossil fuels like oil, gas and coal. Every year, humanity digs up and burns more fossil carbon than it did the year before. And every year we continue to dump the resulting tens of billions of tonnes of CO2 pollution directly into our atmosphere. My next chart shows this clearly.

This chart shows the cumulative amount of CO2 that’s been emitted since 1960.

The bold black line shows the CO2 released by fossil fuel burning (plus a relatively small amount from cement production). As you can see, that line is accelerating too. Last year, humanity dumped an all-time record — exceeding 36 billion tonnes of CO2 (GtCO2) for the first time ever. This year we are on track to exceed 37 GtCO2.

The red line shows the amount of CO2 that has remained in the air.

“We are in trouble. We are in deep trouble with climate change … It is hard to overstate the urgency of our situation … Even as we witness devastating climate impacts causing havoc across the world, we are still not doing enough, nor moving fast enough, to prevent irreversible and catastrophic climate disruption.” — United Nations Secretary General António Guterres speaking at COP24

Out of the frying pan, into the ocean

As the chart above also shows, some of the fossil CO2 we release into the air doesn't stay there. Where does it go? Roughly half gets taken up by increasing growth of bacteria, algae and plants.

The other half dissolves into surface waters, causing ocean acidification. The hundreds of billions of tonnes of our fossil fuel CO2 that have dissolved into the ocean so far have increased sea water acidity by 30 percent. This is causing widespread harm to many marine species from corals to oysters. According to NOAA, the pace of ocean acidification is accelerating as well.

The increases are increasing

My final chart shows the amount of CO2 that the atmosphere gained each year. Every single year it goes up. Individual years have big swings, mostly because oceans temporarily absorb more CO2 in La Nina years, and absorb less CO2 in El Nino years. The red bars show the decade averages, which smooth out these short-term fluctuations.

The unmitigated, ongoing, failure by the current generation to reign in its climate pollution is forcing an ever-growing burden onto future generations. The latest climate science report from the International Panel on Climate Change (IPCC) now says that the younger generation will almost certainly have to find a way to remove massive quantities of CO2 from the atmosphere and oceans, to prevent long-term dangerous climate impacts.

But how can they do this? And how much will it cost them? Is it even possible?

A group of climate scientists, led by James Hansen and Makiko Sato, have studied just this question. Their peer-reviewed paper, Young People’s Burden: Requirement of Negative CO2 Emissions, is being used by a group of young people in the most famous climate court challenge in America — Juliana et al. vs. United States. Their paper states:

"… the GHG climate forcing is not only still growing, the growth rate is actually accelerating … if large fossil fuel emissions are allowed to continue, the scale and cost of industrial CO2 extraction, occurring in conjunction with a deteriorating climate with growing economic effects, may become unmanageable. Simply put, the burden placed on young people and future generations may become too heavy to bear."

Once we get the bitumen

Once we get the bitumen flowing strong and free all these numbers will go down dramatically.