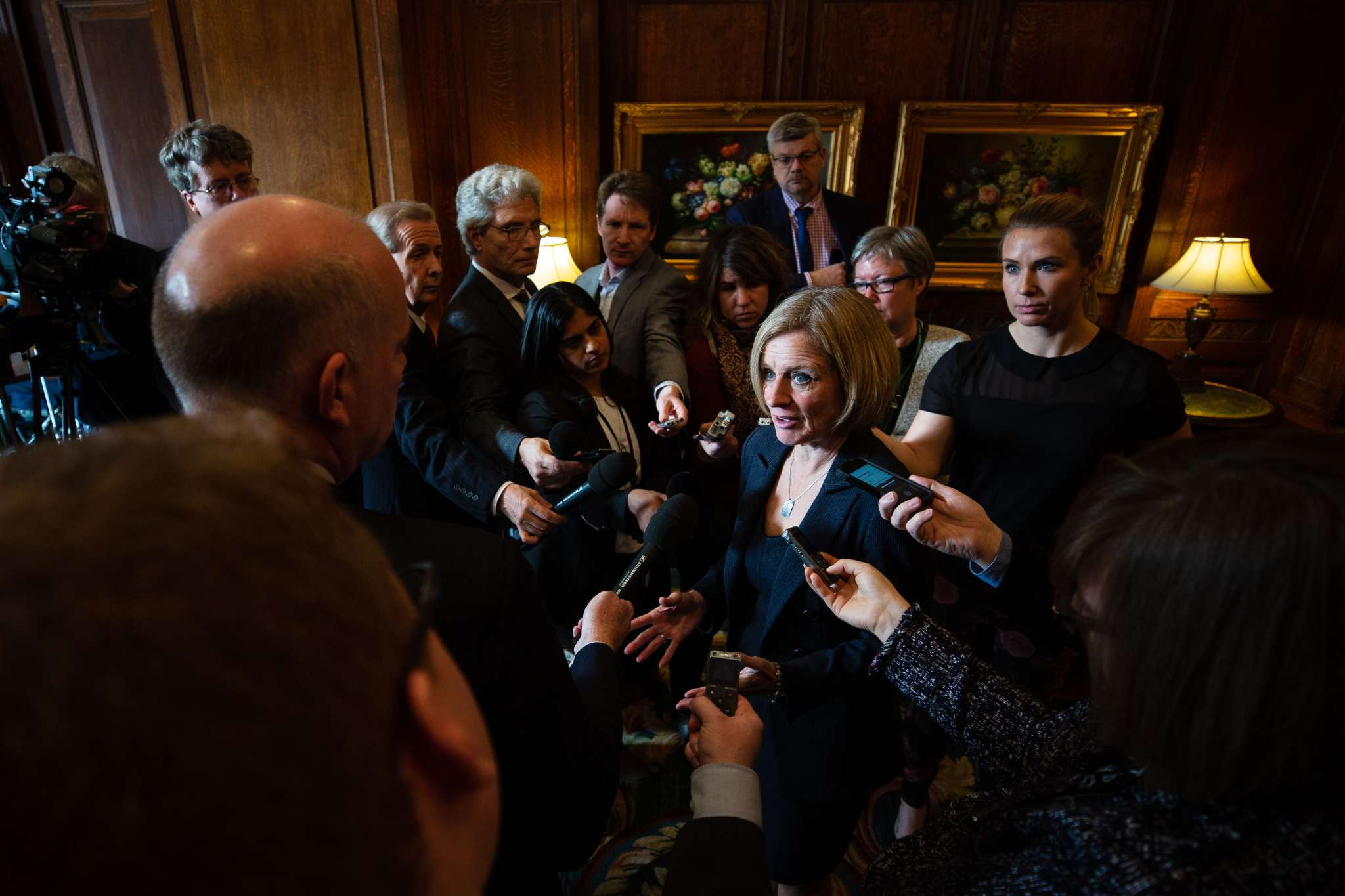 Alberta Premier Rachel Notley speaks to reporters in Ottawa at a luncheon event on Nov. 28, 2018. Photo by Alex Tétreault
Previous story
Next story

Three years after standing shoulder to shoulder with Alberta Premier Rachel Notley to announce her climate leadership plan, Steven Guilbeault says it feels like the province is less willing to tackle carbon pollution from the oilsands.

The long-time environmental activist and co-founder of Montreal non-profit Équiterre was talking about the fact that Alberta still doesn’t have regulations in place to determine how to operate its much-vaunted “hard cap” on oilsands emissions, first announced in late 2015.

“If they’re determined to do that, there’s no reason why it should take so much time,” said Guilbeault in an interview.

Guilbeault recently stepped down from his job as a senior director at Équiterre to focus on other related work. One of his new roles will be on a new federal panel to give the government advice on climate change.

“We’ve seen governments in Canada put in place climate policies — should they be a carbon tax or cap and trade — much more rapidly than what’s happening there (in Alberta). It does feel like the willingness that they initially showed has diminished substantially since.”

Notley has rarely missed an opportunity to talk about the provincial cap of 100 megatonnes a year on oilsands emissions, ever since it was put into law in 2016. She has emphasized its importance to the Economic Club of Canada and the Calgary Chamber of Congress, for example, and continued to point it out to anyone who would listen throughout this fall.

At the time the cap was proposed, annual emissions from the sector were at about 70 megatonnes, meaning that the Notley government was proposing a target that would allow them to grow by about 40 per cent.

"The key thing is that we’ve put a cap on greenhouse gas emissions from the oilsands, which is a fundamentally important thing," she told Maclean's two weeks ago.

In turn, the cap has become a key element of both Notley and Prime Minister Justin Trudeau’s strategy to cut carbon pollution. Ottawa is planning to exempt certain oilsands projects from its new environmental assessment regime because the cap is in place. Trudeau has talked about how approving the Trans Mountain pipeline is part of what allowed Alberta to accept a cap. Notley has repeatedly said the cap means that a new pipeline would not increase carbon emissions.

Yet the cap has never actually been bumped up against, and the province never put the rules in place to govern what happens when it does.

In 2016 Alberta formed the Oil Sands Advisory Group, composed of representatives from industry, non-governmental organizations and First Nations, in order to advise the government on the ramifications of its climate plan for the oilsands — including coming up with a system to implement the emissions cap.

Tim Gray, executive director of Environmental Defence Canada, was a member of the advisory group. He, like Guilbeault, was also among the environmentalists that were standing on stage with Notley and oil executives as they announced Alberta's climate leadership plan.

Gray said in an interview that the cap was seen as a backstop: if other factors like global oil demand and oilpatch investment continued to rise, the cap would ensure there would still be a finite limit to how much carbon pollution the oilsands would generate.

“The closer you are to (the cap), the harder it is to decide who (in industry) gets to go ahead, and the more there are investment decisions that have been made by multiple companies that could conflict with each other,” he said.

In order to achieve this balance, the group came up with a detailed plan that involved allocating emissions space underneath the cap using “an operational reserve of emission allowances” — sort of like how a cap and trade market works — as well as other mechanisms like reviews to check forecasting data.

“It was a huge amount of work trying to figure out the regulatory process for actually implementing a cap,” said Gray. “We came up with a system that was permit-based. You’d basically start now, start issuing permits...then you’d have to start making decisions about how to assign permits when you start getting closer to the cap.”

This was all supposed to be spelled out in regulations — but they never came. Since the advisory group’s report in May 2017, the government has simply continued consulting on the issue.

On Tuesday, the Globe and Mail published a story titled “Alberta delays cap on oil sands carbon emissions.” In the story, Matt Dykstra, press secretary to provincial Environment and Parks Minister Shannon Phillips, acknowledged the province wouldn’t wrap up consultations on the emissions cap regulations before the provincial election this spring.

Dykstra disputed that there is any “delay” in comments to National Observer. He said because Alberta had already enacted the Oil Sands Emissions Limit Act legislating the 100 megatonne emissions cap, it is law and “the law under which Alberta companies are currently operating.”

“There is no delay," said Dykstra. "When it comes to the regulations, we continue to engage with oilsands companies and other organizations. We have always said that we need to get this right and as such, this work will continue over the coming year.”

Gray said the oilsands advisory group had not been recently consulted over the issue of the cap and its regulations. Dykstra did not immediately return a followup request for comment to provide a list of the companies and organizations the government is currently consulting with.

There is a pattern of successive federal and provincial governments that have promised to introduce effective climate change rules for Canada's oilpatch.

A few years ago, the former Harper government in Ottawa pledged to implement regulations to limit greenhouse gas emissions from oil and gas companies. At that time, the Harper government set up a joint committee with Alberta, then led by a Progressive Conservative government, and industry to design the system.

This committee stopped meeting in March 2013, the Toronto Star reported Sept. 14, 2014. The then-Harper government never followed through with any regulations before it was defeated by Prime Minister Justin Trudeau's Liberals in the 2015 election.

Several years later, the office of Alberta Minister Phillips argued the province was “years away” from hitting Notley's new emissions cap. Phillips' office also said that the final regulations “must reflect the latest in clean technologies and extraction procedures.”

“Our suite of effective climate policies under the Climate Leadership Plan, including innovation funding to help reduce emissions in the sector, means we are already taking significant measures to manage emissions under the cap,” said Dykstra.

National Observer asked federal Environment and Climate Change Minister Catherine McKenna her take on the emissions cap “delay” story and whether she felt it would affect Bill C-69, the governments overhaul of the federal environmental assessment regime.

“Alberta has set its cap, and that’s part of our made-in-Canada climate plan, and that’s really important that Alberta follows through on that,” said McKenna, speaking from international climate talks in Poland on Friday.

"We need to make sure the cap is implemented and we're working with Alberta."

AB's fraudulent oilsands cap has more holes in it than Swiss cheese — but won't last as long.
Along with the carbon tax, it's at the top of Jason Kenney's hit list.

One scientific study after another shows that AB oil & gas industry emissions are grossly under-reported.
If AB's emissions stats are fictional, so is AB's temporary oilsands emissions cap. Total oilsands emissions including projects that are under construction, have received approval, or are seeking approval "blow well past" AB's fraudulent cap. (Pembina Institute)

Premier Notley claims that a

Witness the AB Govt's recent constraints on oilsands production. Why? Because of lack of pipelines.

"CERI’s reference case scenario envisions oilsands production rising from 2.8 million barrels per day in 2017 to 3.2 million bpd by 2020 and 4.09 million bpd in 2030.
"That’s down from CERI’s forecast a year ago that showed oilsands output rising to 3.4 million bpd by 2020 and 4.76 million bpd by 2030.
"'A bunch of project capacity has been cancelled so that is no longer part of our evaluation,' Millington said."
• w w w [dot] thestar [dot] com/business/2018/05/07/report-shows-oilsands-emissions-over-cap-by-2030-unless-ghg-intensity-falls [dot] html

"In the 2012 CAPP crude oil forecast production in 2030 was predicted to be 6.2 million b/d, the major change being oilsands output of 5 million b/d compared to this year’s (2016) estimate of 3.7 million b/d. This 1.3 million b/d decline is the negative impact of the numerous projects which have been delayed or cancelled in the past few years."
• w w w [dot] mining [dot] com/web/long-term-outlook-for-canadian-oil-sands-looks-bright/

What the fuck are you talking

In the meantime, Notley's

In the meantime, Notley's government doesn't even try to limit pollution from fracking. The small companies involved are not targeted at all, but are encouraged to keep polluting. Industry underestimates of methane emissions are accepted as gospel, while studies prove that they represent 1/4 of reality. Water contamination and health effects are ignored. Alberta will have no safe water or healthy soils if fracking continues.

Humanity's fatal flaw may be

Humanity's fatal flaw may be greed. If we do not gain control of that basic flaw, I fear we are a dead end species. This flaw is most visible in our constant references to "economic growth" as the reason for not taking effective action on climate change. Should humanity not survive as a species, life on this planet will suffer cataclysmic consequences such as the meltdown of over 400 nuclear reactors as well as the release of all stored nuclear material. The climate will continue to deteriorate beyond our demise. The surviving life forms, if any, are beyond my ability to describe.