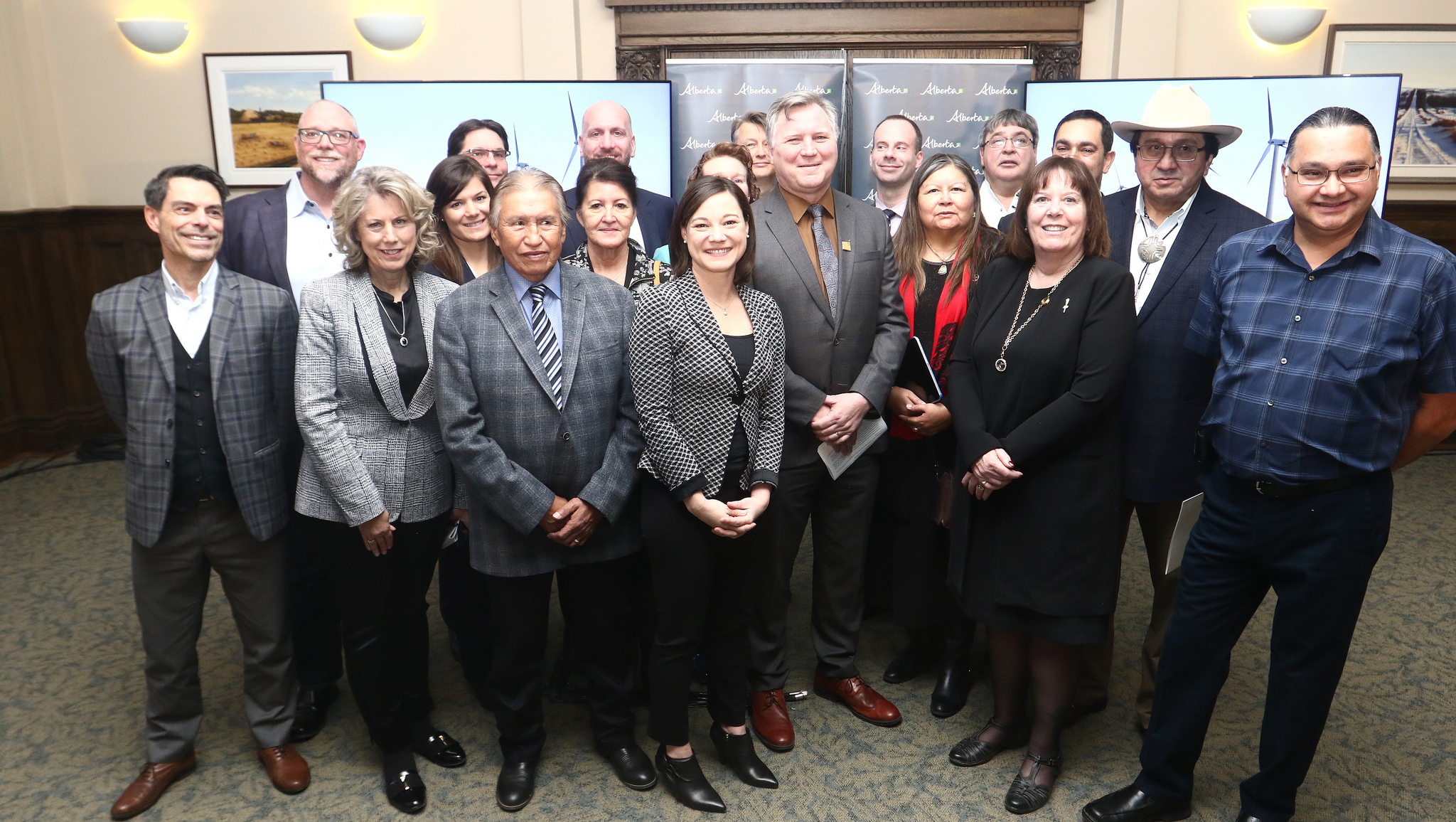 As Ontario turns its back on hundreds of renewable energy contracts, the province at the heart of Canada's oilpatch appears to be going in a different direction.

Alberta will bring on five more renewable energy projects by mid-2021, three of which are partnerships with First Nations, the province’s government said on Monday, with the winning bids again offering to sell wind power at a very competitive price.

The $1.2 billion in new investments — from a unit of French energy giant EDF and a company which had a string of contracts to build solar projects in Ontario cancelled recently, among others — will generate 760 megawatts of green power once up and running, enough to power 300,000 homes.

The projects will create around 1,000 jobs and will leverage “our natural strengths as an energy province here in Alberta in every sense of the word,” Shannon Phillips, the province’s environment minister, said.

The NDP government of Premier Rachel Notley is embarking on a multi-pronged effort to both ensure its massive oil and gas industry can survive an oil price slump and logistical challenges and bolster its fledgling renewable energy industry, which can harness the power of the province’s advantageous wind patterns.

The government is also responding to a call from interested First Nations to involve them in the green industry in their territories, or as Chief Roy Fox from the Kainai First Nation put it, “an opportunity to begin to benefit in some way from what is going on all around us.”

The average weighted price of power at the five planned projects is 3.9 cents per kilowatt-hour, Phillips announced while flanked by a phalanx of government officials and representatives of involved First Nations and companies at a news conference in Calgary.

That is just above the record low price of 3.7 cents set when the inaugural program launched last year with 600 megawatts worth of projects, and compares to a 2016 Ontario procurement that had a weighted average price of 8.5 cents per kilowatt-hour.

“These three ministers that are here with us have helped us a bit,” said Chief Fox, from Kainai’s Blood tribe, referring to Minister Phillips, Indigenous Relations Minister Richard Feehan, and Energy Minister Margaret McCuaig-Boyd.

“We’ve had to convince them, initially, that Indigenous people could very well be involved on the business side of the alternative energy sector“, said Fox, whose nation’s traditional territory encompasses most of southern Alberta, parts of Saskatchewan and into the Dakotas and Montana.

“For decades, First Nations have been left on the sidelines in the industries that have made Alberta so prosperous,” he said. “We hope to be involved in many more projects.”

The second round of the province’s renewable energy program proves Indigenous groups can be involved in partnerships with energy companies “without eroding their needed economic returns,” said Fox, who is also looking to see the government sign a long-term power supply contract for a future 200 megawatt on-reserve wind project.

Fox thanked Indigena Capital for helping fund an equity stake in the project. He said this would help empower our “rights and resources with capital designed exclusively for our unique arena.” Fox said that this was a key element of any economic success.

“Without it, we would be left with name plate participation, and very little to show for it,” he said.

In Alberta, the projects include a 202 megawatt wind farm near Medicine Hat run by EDF Renewables Canada Inc, a subsidiary of the French energy giant, in partnership with the Kainai First Nation. Alberta-based TransAlta Corp, which also operates power plants in the United States and Australia, will build the 207-megawatt Windrise project, southwest of Fort MacLeod, while Ontario's Potentia Renewables Inc will build two separate wind projects with combined capacity of 193 megawatts and another Ontario company, Capstone Infrastructure Corporation, will build the smaller 48-megawatt Buffalo Atlee wind farms near Brooks in partnership with the Sawridge First Nation.

Potentia, a subsidiary of Power Corporation of Canada which changed its name from Potentia Solar Inc. in August 2016, lost out on a string of contracts to build solar capacity in Ontario when they were cancelled by Doug Ford’s government days after it came to power earlier this year.

Potentia's projects in Alberta are the 113-megawatt Stirling Wind project, located near Lethbridge and to be built in partnership with the Paul First Nation and Calgary-based Greengate Power Corporation and the smaller Jenner Wind Project near Brooks.

The company didn’t immediately respond to a request for comment when contacted by National Observer about the size of its new investment in Alberta, the ten cancelled ones in Ontario, or whether it would pursue legal action against the Ford government.

In a release, the company’s CEO, Jeff Jenner, called Alberta “an attractive investment environment” where they would spend almost $500 million on the long-term projects.

“We look forward to continuing to work with the Government of Alberta, the Paul First Nation, and our host communities and landowners to deliver clean power to the Alberta grid, along with the jobs and local economic growth that accompany projects like these,” said Jenner, in the release.

The Alberta government said that its renewable electricity program is funded from carbon pricing revenue and does not add anything to a consumer’s power bill.

The government aims to develop 5,000 megawatts of renewable capacity as part of a plan to make 30 per cent of the power renewable in the oil-exporting province by 2030.

Editor's note: This article was updated with additional quotes from Chief Roy Fox and from Jeff Jenner at 5:14 p.m. ET on Dec. 17, 2018. It was updated again at 3:06 p.m. to correct that the average weighted price of power at the five planned projects is 3.9 cents per kilowatt-hour.

This is clearly a positive

This is clearly a positive move; now, if the Alberta Government was planning to reduce greenhouse gas emissions rather than allowing them to increase, we might be convinced.

Basically, it's better if

Basically, it's better if they do this than if they don't do this. But it would be far better if they didn't do the tar sands than if they did. This is a good policy, that is a bad policy.
Even I will admit that if I were premier of Alberta I couldn't just shut down the whole tar sands operation overnight. But, I could charge way higher royalties and use the money to do a lot more renewable stuff like this while refusing to allow new projects or expansions. And when price slumps combined with the royalties made some projects unviable, I could refuse to bail them out and instead buy them for pennies on the dollar and shut them down. I could, basically, shrink the whole thing down until, as some far right yahoo US politician said of the welfare state, it was small enough to drown it in the bathtub.

For several years now I have

For several years now I have been suggesting (making positive, constructive comments) in my letters of protest to various federal/provincial politicians and bureaucrats, that turning our many off-grid First Nations reserves into test beds for sustainable energy projects would be beneficial - in a number of ways. I won't take credit for an idea that many have likely proposed, but I DO rejoice that Alberta is displaying a glimmer of intelligence, despite all the sound and fury attending the death throes of the oil/gas oligarchies. Kudos to Purple Library Guy - like most of the library people I know he speaks with sense, humanity and idealism. Too bad more politicians don't listen.

Rachel Notley may be learning

Rachel Notley may be learning a wonderful old song, I'm Beginning To See The Light!
Hopefully the idea will have time to catch on before Jason Kenney takes over and follows his soulmate Ford in wiping out the progress overnight. The flames of fear, prejudice, and desperation are so easily re-kindled.
Perhaps Potentia will put money where their mouth is and quickly demonstrate their belief in "Alberta's attractive investment environment".