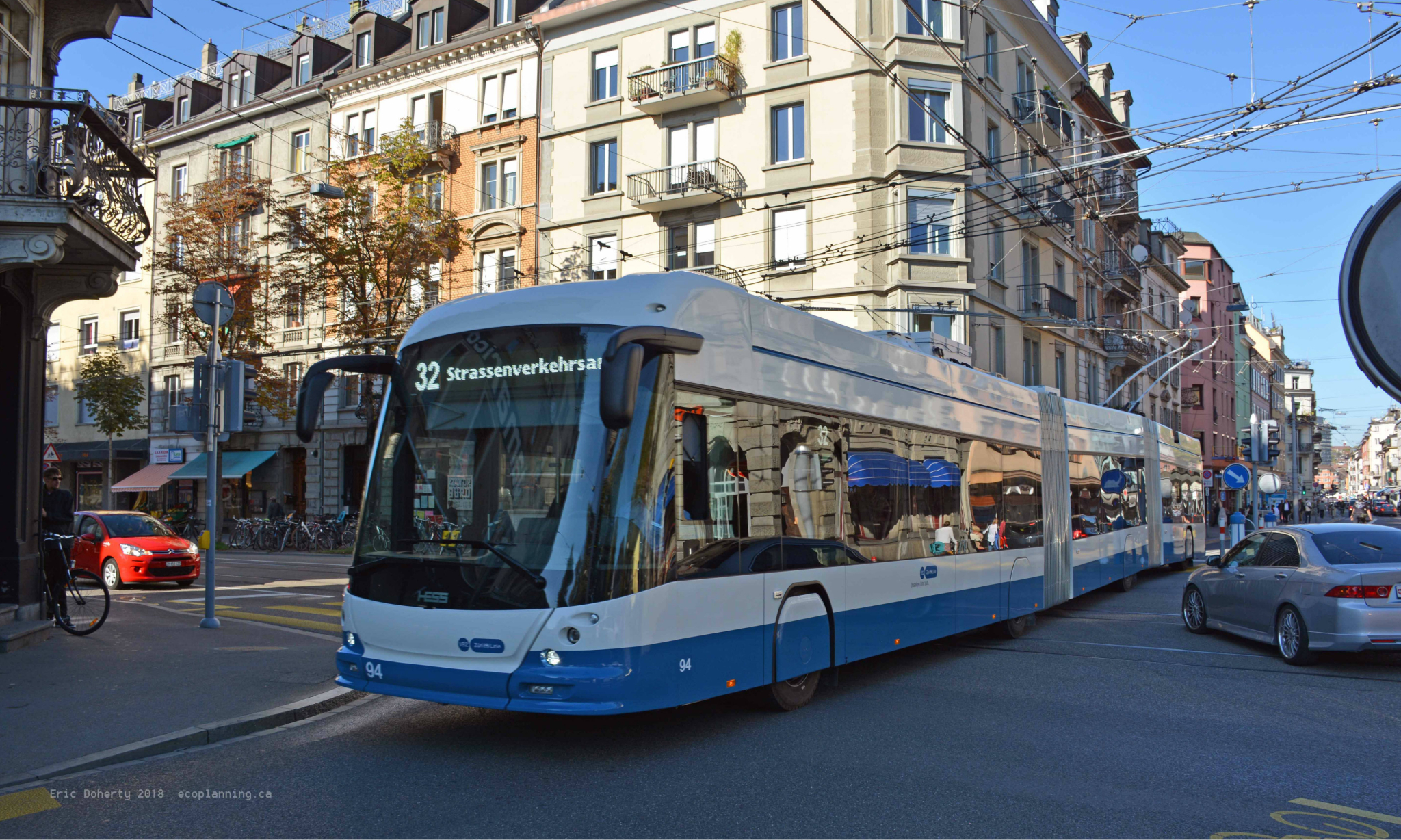 I attended the sixth International e-bus conference in Solingen, Germany in November, a few weeks before 15-year-old Greta Thunberg stole the show at the United Nations COP 24 climate conference in Poland.

“We are facing an existential threat and . . . already have all the facts and solutions,” Thunberg told the crowd at the UN conference. The experts at the e-bus conference I attended confirmed Thunberg’s point about solutions; electric buses are ready to replace fossil fuel buses, even on the busiest routes. Solingen is aiming for 80 per cent electric buses within four years, and will phase out burning fossil fuels as older buses are replaced.

Buses that charge their batteries off overhead trolley wires while moving, and operate like other battery electric buses off-wire, can cover the same distance in a day as a diesel bus. And the overhead wires only need to cover between one-fifth and two-thirds of the route, so costs are not much more than burning diesel. Battery trolleybus technology is well proven; the system in Rome has been in operation since 2005.

Clean buses on the rise

The cities in the best position to quickly shift to electric buses are those that already have trolleybus wires in place.

“It’s a no brainer . . .to use electric buses which are powered with in motion charging,” said Erik Lenz of Kiepe Electric at the e-bus conference. Solingen’s transit agency has stopped ordering fossil fuel buses and is using their existing trolley wire network to charge battery trolleybuses. “It is a very efficient system, and that’s why they went for it.”

Cities with existing trolleybus wire networks (such as Lyon, Vancouver, Seattle and San Francisco, Shanghai and Bejing, and over 300 other trolleybus cities around the world) already have powerful charging systems in place for electric buses.

New battery trolleybus lines are also being installed for bus rapid transit lines. Bus rapid transit (BRT) utilizes bus lanes, typically in the center of the road, and other features to make bus service faster and more convenient.) Before the conference, I rode the BRT line in Castellón, Spain, which is about 10 years old. The quiet electric buses run connected to overhead trolley wires on a car-free bus lanes for much of the route, but run off-wire through Castellón’s charming historical center. A new battery trolleybus BRT line will open in Rimini, Italy in 2019. Some European trolleybus cities (including Lyon, France and Zurich, Switzerland) are expanding their already extensive bus lane networks so their transit riders don’t get stuck in traffic.

Trolleybus BRT lines are not isolated to Europe. Two of the three BRT lines in Bejing, China have been converted to operate with trolleybuses. And San Francisco is constructing a BRT corridor on an existing trolleybus line. The oldest trolleybus BRT line is in Quito, Ecuador, in operation since 1995 and widely used by the public.

Since BRT lines are less expensive and quicker to build than other forms of rapid transit, electric BRT is a crucial climate solution – you don’t have to be 15 years old to know humanity is running out of time.

Experts from cities such as Berlin and Stockholm told the e-bus conference that different types of electric bus charging systems are required for different transit lines. Buses that charge overnight work best for smaller buses that don’t travel far per day. Electric buses that stop and charge at fast chargers have a role on moderately demanding lines. But the heavy lifting is best done by battery electric trolleybuses, which are the most practical technology for large buses on the busiest and most demanding routes.

Using other types of electric buses on the most demanding routes would require buying and operating more buses, with each bus driving a shorter distance per day. This would be very expensive in large cities where land to park and charge buses is not readily available.

Unfortunately, the world’s largest manufacturer of electric buses has been reportedly beset by 'poor performance' including driving ranges that fall short of company claims in the U.S., leading disappointed transit agencies to delay the transition off fossil fuels. But transit agencies everywhere can learn from European experience with what each type of electric bus can really do.

With battery trolleybuses, there is no need to wait around for the battery industry to make improbable technical leaps – while batteries getting cheaper they are still very heavy, and weight will likely still be a big issue a decade from now.

Prices will come down

Soon, Trolley:motion, which organized the e-bus conference, will be assisting with the conversion of an ordinary battery electric bus to a battery trolleybus capable of operating all day on very demanding routes. If this goes as expected, most bus manufactures should soon offer trolley poles as an option on their electric buses.

For the sake of the planet's livability for her generation, Thunberg demands that adults “start treating the crisis as a crisis . . . Because we are facing an existential threat and there is no time to continue down this road of madness.”

If we start treating the climate crisis as a true crisis, there will soon be a rapid growth of clean electric public transit options in communities around the world.

This article has more

This article has more information on the limitations of electric buses with only stationary charging. Worth a read! "I learned at the interview that the headline figures used in the US for electric bus performance explicitly exclude heating needs. The tests are done at the Altoona site and only look at electricity consumption for propulsion, not heating. New Flyer says that it is aware of this issue and has tried not to overpromise, but evidently Proterra and BYD both overpromise, and regardless of what any vendor says, American cities have bought into the hype. In Duluth this was only resolved with fuel-fired heaters; the buses only use electricity for propulsion, which is not the majority of their energy consumption in winter." https://pedestrianobservations.com/2019/03/30/battery-electric-buses-new...

I finally got a video of

I finally got a video of Battery Trolleybuses done. May make some of the content in my article clearer. https://youtu.be/HmtXLoe8jog

Update re Berlin, they are

Update re Berlin, they are proceeding with battery trolleybus plans as discussed at the conference "Under the slogan “as much as necessary and as much as possible”, the partial electrification with catenary represents the economical optimum between re-charging infrastructure and batteries. The plan is that battery-hybrid-trolleybuses will run under catenary 50 – 65 % of the respective routes in order to re-charge the traction batteries. The rest of the line will be operated in battery mode." https://www.urban-transport-magazine.com/en/bvg-berlin-plans-implementat...

Update: Berlin is moving ahead with battery trolleybuses https://www.urban-transport-magazine.com/en/bvg-berlin-plans-implementat...