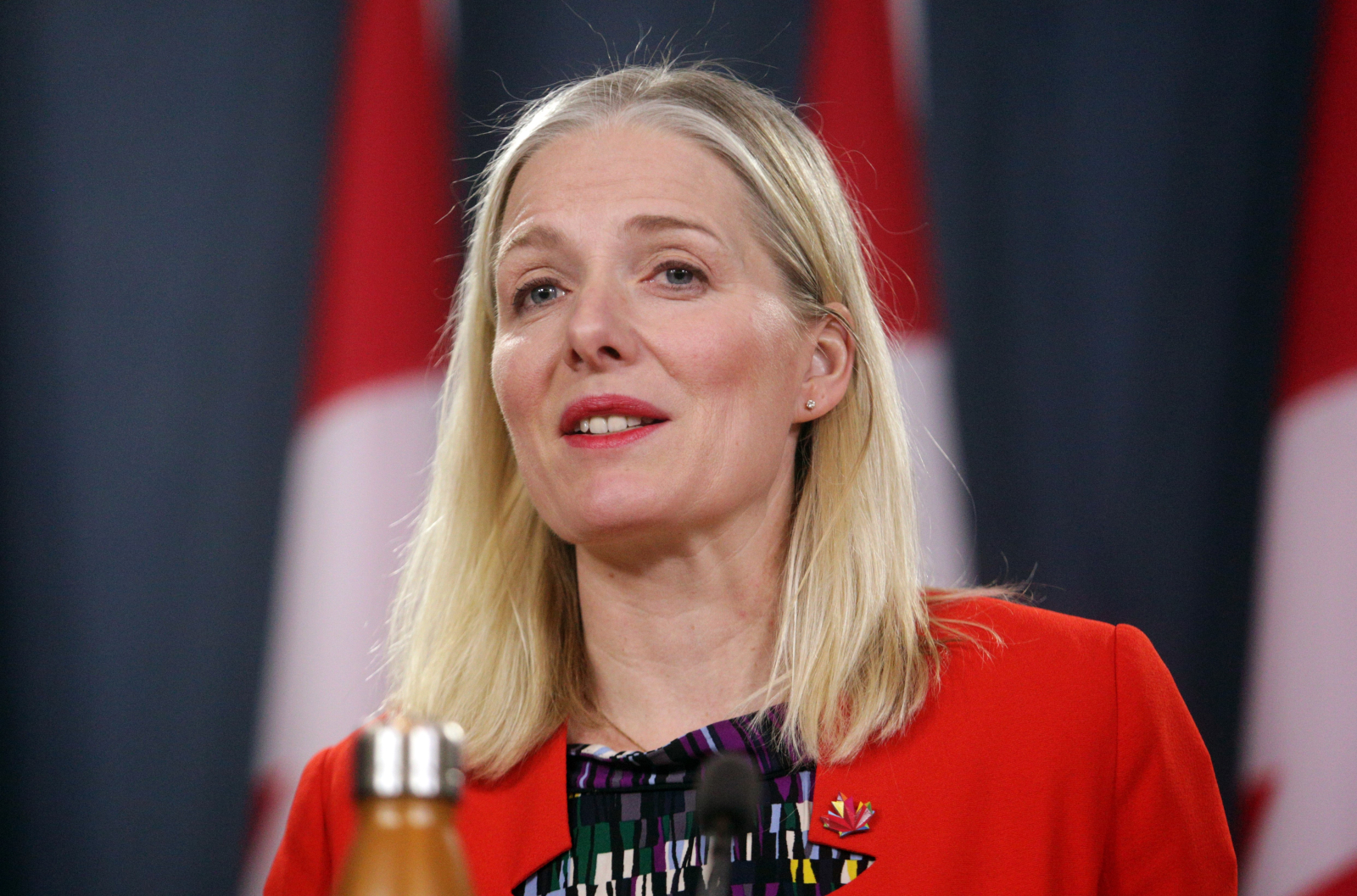 Canada is banking on technological advances, increased use of more efficient public transit, and the future efforts of sometimes recalcitrant provinces and territories to collectively cut 79 million tonnes of carbon pollution so that it can hit its national climate target for 2030, the federal environment minister said on Thursday.

Environment and Climate Change Minister Catherine McKenna confirmed the federal government's plans to regulate transportation, updated the country's system for pricing large polluters and issued a new endorsement by provincial leaders of its federal climate plan on Thursday, after the National Observer reported on those detailed plans Wednesday.

Canada expects to reduce its greenhouse gases through a number of measures including its national carbon pricing plan, which will roll out within weeks and against the wishes of some premiers including Ontario's Doug Ford, as well as by enforcing new cleaner fuel rules and further restrictions on the oil and gas sector.

The other provinces and territories that have not established adequate provincial carbon pricing and will fall under the federal scheme - pending a legal challenge - include New Brunswick, Manitoba, Saskatchewan, Northwest Territories and Yukon.

Emissions in 2030 are expected to decline to 592 million tonnes, compared to increasing to 815 million tonnes under Canada’s 2015 projections. “Canada’s emissions are going down while our economy is growing,” said McKenna. “We’ve made progress compared to what was going on under the Harper government.”

'This iPhone didn't exist 10 years ago'

The largest category of emissions savings in the government’s arsenal, however, belongs to “unmodeled measures and future reductions,” which includes savings that senior officials said weren’t yet factored in.

These include things like new light-rail transit in places like Calgary and Ottawa, and more electric vehicles on the road, both of which are expected to displace gasoline-powered cars; the adoption of heat pumps that can replace natural gas heating; more efficient technology in power plants; and new provincial initiatives, like the B.C. government’s CleanBC plan.

Speaking from the National Press Theatre in Ottawa, McKenna repeatedly held up her own cell phone to the cameras, in order to make a point about how new technology has the power to quickly alter the economic landscape.

"This iPhone didn't exist 10 years ago and we're talking about 12 years down the road," she said.

"The solutions that we're seeing coming to the market are actually taking pollution and making something useful out of it, taking carbon pollution out of the air. So there are huge opportunities, and we're investing in them and we're going to figure out the way forward in a cost-effective manner."

'We already are taking those future measures'

Challenged on the unmodeled measures emissions gap, McKenna insisted "we already are taking those future measures" through investments in public transportation and clean technologies.

“We are clear that we will hit our targets, and there are still many measures that we have still not modeled," she said.

The minister outlined her government’s actions so far on climate, including its price on pollution, work to phase out coal power, investment in green infrastructure such as light rail and an electric-vehicle charging network, doubling the amount of protected nature by 2020, reducing plastic pollution, overhauling the federal environmental assessment regime and working to make buildings more efficient.

She said the new clean fuel standard will have a “very minimal costs to consumers” and be coupled with opportunities for farmers and entrepreneurs. And she contrasted what she felt was a small price to pay for climate action with costs of "tens of billions of dollars in Canada" if there is inaction on climate change.

Patrick Bonin, climate and energy campaigner for Greenpeace Canada, said the emissions trends showed Canada is still falling behind when it comes to its 2030 target.

"The Trudeau government must stop pretending that it is on track to meet its target for 2030 when it has no plan to get there," said Bonin in a statement. "Beyond beautiful green rhetoric, the Trudeau government will never be a climate leader if it does not cap or quickly reduce emissions from the oil and gas sector while planning a transition for workers in this sector."

Carbon pricing and the clean fuel standard are important measures, he added, "but if nothing is done, these efforts will be squandered by pipeline construction and expansion of production that these pipelines would generate."

On Thursday, McKenna introduced a "regulatory design paper" for the proposed clean fuel standard regime, that is expected to cut carbon pollution from the transportation sector.

The purpose of the fuel standard is to lower the amount of pollution that's created every time Canadians burn fuel to power their cars or run their business. The idea is similar to how vehicle engines have become a lot more efficient over the last decade, and now require less gas to go the same distance. The fuel standard proposes to make the fuel itself more efficient.

The fuel standard has been touted as "one of the largest emissions-reduction policies” in the government's overall climate strategy, the Pan-Canadian Framework. As of 2016, pollution from transportation was responsible for 25 per cent of Canada's overall greenhouse emissions.

The government has said the standard will reduce carbon pollution from fuels by 30 million tonnes in 2030. The design paper introduced Thursday proposes to reduce the carbon intensity - the amount of pollution released per unit of energy - for gasoline and other liquid fossil fuels by 11 percent, or by 10 grams of carbon dioxide per megajoule of energy by 2030.

"It will reduce pollution equivalent by getting a third of the cars off the road using cleaner fuels," said McKenna.

"It's also a huge economic boost, creating 31,000 jobs for skilled workers, benefiting farmers who grow grain that can be turned into cleaner fuels, and creating an incentive for a cleaner innovation and jobs through the amazing clean companies that I've seen across the country."

“The focus on transportation fuels provides a clear signal to investors that Canada needs an increased supply of cleaner fuels, from renewable fuels to electricity and hydrogen," he said in a statement.

“Producing cleaner fuel is a significant economic opportunity. Our research shows that a strong Clean Fuel Standard would drive $5.6 billion a year in economic activity and create up to 31,000 jobs for workers building, supplying, and operating new clean fuel facilities.”

"This job-killing scheme is unprecedented anywhere in the world as it applies to all fuel sources, including fuel used for manufacturing and home heating. That means it will raise the cost of everything from groceries to putting gas in the car," they said in a press release.

For Prime Minister Justin Trudeau, "paying more at the pump is not a big deal, but it will have a real impact on hardworking families in Canada," they added.

The fuel charge will begin starting in April 2019 for Ontario, New Brunswick, Manitoba and Saskatchewan, and in July for Northwest Territories and Yukon.

At that point, the government’s “climate action incentive” payments — its rebates to Canadians for having to shoulder extra costs related to carbon pricing — will go out to the four provinces as well. Ottawa will be returning all the money collected to the provinces, McKenna stated.

The government expects to cut 47 million tonnes of pollution from the oil and gas sector over the next decade; the Trudeau government is in the process of introducing several measures such as restrictions on methane, a powerful greenhouse gas, and intensity-based limits on large polluters that will alter the industry. It also expects to cut 23 million tonnes from the transportation sector, through regulation of transportation emissions.

Its regulatory system for large polluters applies to industrial facilities located in jurisdictions with the federal carbon price — that is, without provincial systems already in place — and that emit 50 kilotonnes of pollution or more a year.

Facilities are given an annual limit based on an average intensity benchmark for their industry. If they come under, they will receive credits; if they go over, they will have to buy them. That system will kick in on Jan. 1, 2019 for Ontario, New Brunswick, Manitoba, Prince Edward Island and part of Saskatchewan.

Over the summer, departmental officials said they were scaling back that system for four sectors that had been assessed to be in a “high competitive risk category” — cement, iron and steel manufacturing, lime and nitrogen fertilizers.

On Thursday, cement and lime were given even more wiggle room due to updated data.

By “early 2019” there will be new details on the use of revenues from that system, and the 10 per cent of the government’s fuel charge that are dedicated to things like small and medium sized businesses, municipalities, schools, hospitals and Indigenous communities.

In other words Canada's

In other words Canada's strategy is hope.

I sense the Liberals finally

I sense the Liberals finally realize their days in power are numbered. No, Mr. Trudeau's charm alone was not going to see them win a second term in office. We are now able to see through the Liberal party. Virtue signalling and divisive politics will be the cornerstone of their legacy.

Sadly this almost certainly means a government even more divisive, overtly opposed to environmental programs, covertly racist, fiscally incompetent and devoted to simple minded 19th century solutions to 21st century problems they are incapable of even comprehending. Much more suited to the majority of Canada's voting population though as far as I can tell.

Sadly this almost certainly means a government even more divisive, overtly opposed to environmental programs, covertly racist, fiscally incompetent and devoted to simple minded 19th century solutions to 21st century problems they are incapable of even comprehending. Much more suited to the majority of Canada's population though as far as I can tell.

Take note of the pie chart

Simply an accounting trick.
Due to AGW impacts (wildfire and insect infestations), Canada's forests have been net carbon sources (not sinks) for years (NRCan). This trend will only continue with global warming.

From Env Cda's report:
"[The Nationally-Determined Contribution (NDC) for 2030] also stated that Canada will … exclude the impacts of natural disturbances and focus on anthropogenic emissions and removals."

Someone needs to check on

Someone needs to check on these figures. Can't trust the Conservatives to do any better as many of them do not believe in climate change and believes in pipelines more than the Liberals. This sounds like a lot of let's hope this all works out but a lot depends on ...........and ...........and..........