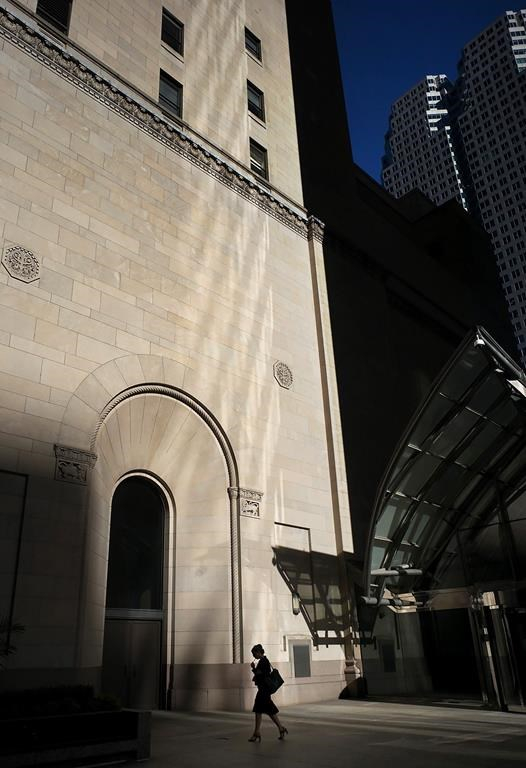 A new report on the country's highest-paid CEOs is adding evidence to the argument that women face a "double-pane glass ceiling" at the top of Canada's corporate ladder — first in getting to the executive suite and, once there, earning as much as their male counterparts.

The Canadian Centre for Policy Alternatives calculates that of the more than 1,200 named executive officers, or NEOs, at 249 publicly traded companies in Canada, women earn about 68 cents for every dollar made by their male counterparts.

The study says the gap closes to 86 cents when looking at the wages of women and men in senior manager roles, almost in line with the country's overall pay gap of 87 cents based on Statistics Canada calculations.

The gap at the top means that, on average, men earn about $950,000 more annually than women in similar executive positions.

The author of the report says the findings, while focused on the executive level where pay is already high, point to a larger equity issue.

"This is certainly about executives — that's what we're looking at — but I think it's reflective of what's happening throughout corporate Canada and the difficulties that women face in getting a fair shake even if they do have the qualifications," said David Macdonald, the centre's senior economist.

The findings are attached to the left-leaning centre's annual report on the salaries of Canada's highest-paid CEOs, who are estimated to earn what an average worker makes in a year by the time lunch rolls around Wednesday.

A review of corporate filings of publicly traded companies shows the top CEOs earned an average of $10 million in 2017, the most recent year available, or about 197 times more than the average worker.

An earlier analysis by The Canadian Press, cited in the centre's report, found a similar gap among the country's top 60 publicly traded companies. The review of records for 312 NEOs showed only 25 women and they earned an average of 64 cents for every dollar earned by male counterparts.

Interviews with about a dozen executives revealed a range of reasons.

They told The Canadian Press about how companies rely on the "old boys' club" for executive searches. They also spoke about how outdated — and unchallenged — corporate culture in some companies leave women out of top jobs or fail to provide workplace support. The executives also mentioned a lack of confidence and risk-taking among women, an issue highlighted in academic research on executive pay.

First, few women are CEOs — about four per cent of Canadian CEOs and 10 per cent of top executives are women — where pay is the highest.

Second, "performance pay" given to top executives — stock, stock options or cash rewards based on how a company performs — is predominantly higher for men than women. Eliminating bonus pay from the equation shrinks the gap to 82 cents, or almost the gap in the wider workforce.

Finally, companies that have more women in their executive ranks tend to be smaller organizations, and therefore pay less than their larger counterparts, Macdonald said.

Federal legislation passed in the spring created a "comply or explain" model for diversity on corporate boards, rather than setting quotas for the number of women, for instance. Macdonald's report, citing a decade of data from Norway where quotas have increased the number of women on boards, suggests quotas aren't the answer to closing the pay gap.

The corporate climb: Stalled progress for women in Canadian C-suites

Canada must do better on gender pay, participation gaps, but parity a challenge: Morneau