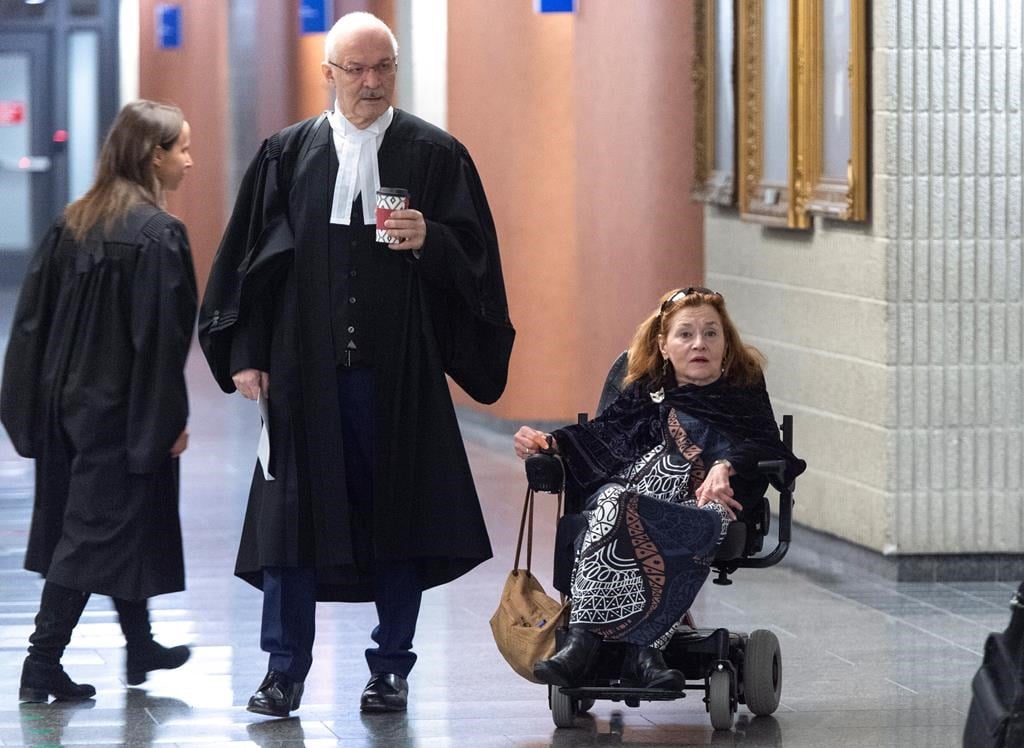 Nicole Gladu, who is incurably ill, and her lawyer Jean-Pierre Menard arrive at the courthouse in Montreal on Jan. 7, 2019. Photo by The Canadian Press/Paul Chiasson
Previous story
Next story

Two Quebecers suffering from incurable degenerative diseases were in court Monday to challenge provincial and federal laws that have left them ineligible for medically assisted death.

Jean Truchon and Nicole Gladu do not qualify to have a physician end their lives because, despite their suffering, they are not considered to be at the end of life. Gladu suffers from post-polio syndrome and Truchon has cerebral palsy.

"I'm completely worn out," Gladu, 73, told reporters outside the courtroom.

Under federal law, a person's natural death must be "reasonably foreseeable" before they can receive medical assistance in dying. The Quebec law similarly says people must "be at the end of life."

Because Gladu and Truchon did not meet the criteria, doctors turned down their requests for medically assisted death. They are asking Quebec Superior Court to allow doctors to provide them with medical aid in dying and to invalidate the articles of the federal and provincial laws that blocked their requests.

They argue that the requirement that people be at the end of life, or that their death be "reasonably foreseeable," is ambiguous and creates uncertainty. They say it leads some people to consider other methods, such as a hunger strike or suicide.

Their lawyer, Jean-Pierre Menard, said people who are suffering should not have to resort to "a cruel death." He plans to argue that the laws infringe Charter protections of the right to life and security as well as the right to equality.

"They have fought all their lives to be treated equally with others," Menard told Justice Christine Baudouin. "These people are at the twilight of their lives, and they continue to have to fight to have an end brought to their suffering."

The federal attorney general will argue that the requirement of a "reasonably foreseeable" natural death is necessary to strike a balance. Otherwise, it argues, a message would be sent to vulnerable people that life is not worth living. The Quebec attorney general will argue that the "end of life" requirement is sufficiently flexible and leaves the decision in the hands of physicians.

Gladu testified Monday that she contracted polio at the age of four, and it plunged her into a four-month coma. She managed to recover and build a successful career in journalism and government before it was interrupted by the effects of post-polio syndrome.

The trial is scheduled to last 33 days, but her health will not allow her to attend every day. Courthouse officials have installed a video-conference system in her home so she can follow the proceedings.

Truchon is scheduled to testify Tuesday.