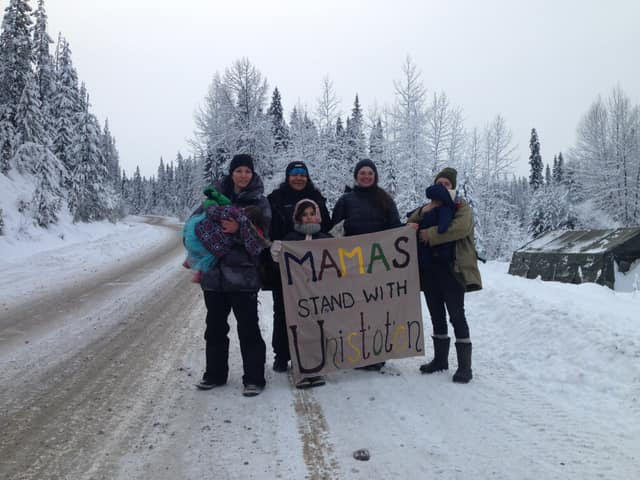 The Unist’ot’en Camp near Smithers in northern British Columbia offers a crucial lesson for all humanity -- that the land provides for everyone who lives on it, and we in turn have a responsibility to reciprocate and care for the land.

The remote camp has been led by Indigenous Wet’suwet’en people of the Unist'ot'en (Big Frog Clan) for the past decade and provides much-needed healing and education, but is now under threat from a colonial injunction sought by TransCanada’s Coastal GasLink and granted by the BC Supreme Court last month.

In a brilliant response to the injunction, the neighbouring Gitdimt’en clan of the Wet’suwet’en people set up a new checkpoint camp days after the ruling, preventing Coastal GasLink from proceeding to Unist’ot’en that day. The company then sought, and received, an expanded injunction, but the spirit of the land still speaks loud and clear through Gitdimt’en: no trespass on Wet’suwet’en lands.

This principled exercise of Indigenous sovereignty was breached by the violent trespass of Royal Canadian Mounted Police onto Wet’suwet’en lands yesterday, with 14 land protectors arrested so far.

When I visit Wet’suwet’en territories - lands recognized by the Supreme Court of Canada’s Delgamuukw decision as unceded - I am moved by how the people's bonds with the land are renewed by hunting, foraging, medicine-gathering and much more. For instance, just after I arrived, a newly hunted moose had given itself to help sustain the Gitdumt’en camp in the midst of winter, and the people in turn are protecting the habitat of the moose and so much more life.

After completing the free, prior and informed consent protocol to ensure that our visit would respect and benefit the land and its people, four of us arrived on Christmas at the Unist’ot’en Healing Centre, whose work is threatened by Coastal GasLink's pipeline and BC’s cheerleading for an LNG project that would dangerously increase this province’s greenhouse gas emissions.

Everywhere I turn, snow absorbs our sounds, stilling our hearts and minds to be calm and steady. As a friend of mine says, when it snows, the ancestors are with us. I feel their strong presence on Wet’suwet’en territory. I witness how the Wedzin Kwa (the Morice River) still runs, cold, clear and delicious, so clean that we can drink the water directly from the river without treating it or dousing it with chlorine. This is precious, rare and worthy of protection. The river water enters me and becomes part of me as I gratefully swallow it, and I in turn become part of this land and water that sustains me.

As Dr. Karla Tait and Anne Spice point out, the injunction pushing for pipeline industry access to Wet’suwet’en land “shows blatant disregard for Anuk Nu’at’en (Wet’suwet’en law) which pre-dates Canadian and provincial law, for the feast system of governance that upholds Anuk Nu’at’en, and for Aboriginal title."

Indigenous determination to protect their land for future generations offers lessons for us all, @rrrwong says after a recent visit to Wet'suwet'en territory in remote northern British Columbia.

"Its enforcement would be illegal under both Canadian law and Anuk Nu’at’en," they add. "The dispute over the pipeline is, at heart, a struggle over the meaning of Aboriginal title and the rights of Indigenous peoples to determine the use of their unceded, unsurrendered ancestral territories.”

Having guided people for millennia on this land, traditional Indigenous laws like Anuk Nu’at’en provide more long-term wisdom than colonial laws because embedded within them is a respect for nature. They are ecologically intelligent in a way that western-imposed law is not because they recognize and respect physical limits, teaching us to only “take what we need, and leave the rest”. As such, I see the Wet’suwet’en exercise of their traditional laws and responsibilities as something that everyone needs to learn from in a time of climate emergency.

We ignore the responsibilities to respect and give back to the land at our own peril. Each year, new record-high temperatures and extreme weather events speak warnings - in the form of natural disasters - that we need to heed. There is a good way through this dangerous moment, but we need to put aside capitalist presumptions and respectfully stand with the Indigenous peoples of this land. We need to focus on how to honour our relationships with the land and each other.

The Delgamuukw decision in 1997 affirmed the power of Aboriginal title within Canadian law. In particular, it pointed out how central their relationship to land is to Indigenous peoples’ cultures:

The content of aboriginal title contains an inherent limit in that lands so held cannot be used in a manner that is irreconcilable with the nature of the claimants’ attachment to those lands. This inherent limit arises because the relationship of an aboriginal community with its land should not be prevented from continuing into the future. Occupancy is determined by reference to the activities that have taken place on the land and the uses to which the land has been put by the particular group. If lands are so occupied, there will exist a special bond between the group and the land in question such that the land will be part of the definition of the group’s distinctive culture. Land held by virtue of aboriginal title may not be alienated because the land has an inherent and unique value in itself, which is enjoyed by the community with aboriginal title to it. The community cannot put the land to uses which would destroy that value.

In other words, allowing a pipeline to destroy the land and water would violate not only Wet’suwet’en law, but the Supreme Court of Canada’s conception of Aboriginal title. Yet an injunction was still granted by a lower court that would permit industry to violate Wet’suwet’en law, particularly the free, prior, and informed consent protocol that is upheld at both the Gitdim’ten and Unist’ot’en checkpoints.

When the courts and the governments fail to respect justice and the Indigenous laws of this land, the people must speak up and hold them accountable. Those who are not Indigenous to this land have a stake in respecting and supporting diverse and regionally-specific Indigenous ways of knowing, being, and doing. This is both ethical and practical, as these ways are a path to our survival as a species. They teach us to consume less and care for the land more. Humanity’s crucial relationship to the land is something that can and must be learned. Who better to learn this lesson from than the courageous community who fought and won the Delgamuukw case?

We cannot afford to forget our gratitude to the land that provides for us, and that has a larger spirit and intelligence that we can learn from, when we are humble and attentive. The arrogance of endlessly expanding extraction is a dead end that turns the land’s gifts into poisoned trash, forgetting reciprocity in this drive to consume at all costs. When the Wet’suwet’en renew their relations with the land, we all benefit and learn from this. And so it inspires me to see people coming from far away to stand in solidarity with the Unist’ot’en and Gitdumt’en.

Those who cannot make the long trek north can still help to protect the land and climate from further fossil fuel extraction in various ways described here.

Rita Wong is a poet-scholar who works with and for water. She is the author of several books of poetry, most recently beholden: a poem as long as the river (with Fred Wah, Talonbooks, 2018). She co-edited the anthology downstream: reimagining water with Dorothy Christian (Wilfrid Laurier University Press, 2017). Wong has previously written about her experiences at the Unist’ot’en Camp for rabble.

Thank you for sending this

Thank you for sending this message. It's very poetic, and while it's not remotely balanced journalism, neither is the G&M or NP, so I subscribe here to get the unbalanced view from the other side.

A point I always make in climate discussions, though, is that attempting to move us away from carbon consumption by beating up on the producers is going to be about as effective as moving people away from opiates by suppressing the smugglers and dealers: all you do is raise the price (a little bit), lower consumption not at all - it may well go up - and bring more ruthless actors into the business.

It is best suppressed on the consumption side. How many vehicles were used to set up the checkpoint? Did people (like journalists) coming there to see the show fly, or travel with several people in a vehicle, preferably a bus? Why was the sign made of plywood that has a large carbon footprint in its manufacture?

Does that sound picky? As long as it sounds picky, you aren't taking the right attitude to consumption.

You are sending one message with your words, perhaps another with your actions, which always speak louder, and that message is: "Be sure there's always gas at the pump so I can run my truck up to the checkpoint, so keep that oil flowing. (Just not in my backyard.)"

Of course one can always ask

Of course one can always ask these same questions! However, as long as the sustainable alternatives are repressed, activists MUST continue with what they have to work with! You would do well, Roy, to include some points about the Unistoten camp which are truly sustainable, such as the photo-voltaic panels, etc.

It's not whether the CAMP is

It's not whether the CAMP is sustainable, but whether YOU are sustainable. Do you burn an extra ton of carbon to fly somewhere, or save the ton of carbon by spending two or three days on a bus? When you send the message "a couple of days of my time and discomfort is worth an entire ton of carbon", you just commanded the oil industry to extract seven barrels of oil so you could avoid a bus trip. If your words are saying "stop the oil" and your actions are saying "please extract seven barrels so that I can more conveniently and quickly come here and say that", then your actions will speak louder. The seven barrels completely invalidate 5 years of carbon-savings from a square metre of solar panel. Which, by the way, starts off with a carbon imprint of its own that isn't paid back for about two years.

Talk to me when you've switched to the bus, even for cross-country trips.

No mention of the elected

No mention of the elected chiefs that gave consent?

Thank for this educational

Thank for this educational article. It is clear that Wet'suwet'en law is founded on thinking and acting in accordance of the whole of Mother Earth and her species, not just short term gain. John Horgan, Rachel Notley and Justin Trudeau are okay with expanding fossil fuel ecocide strategies that are leaving billions of dollars, (in Alberta $260 Billion toxic tar sands, oil and gas well costs) to the public. It will be in the billions in Northern BC. This they say is in the national interest. The International fossil fuel companies that their profits and run. Great governance.

Thank you for this excellent piece!