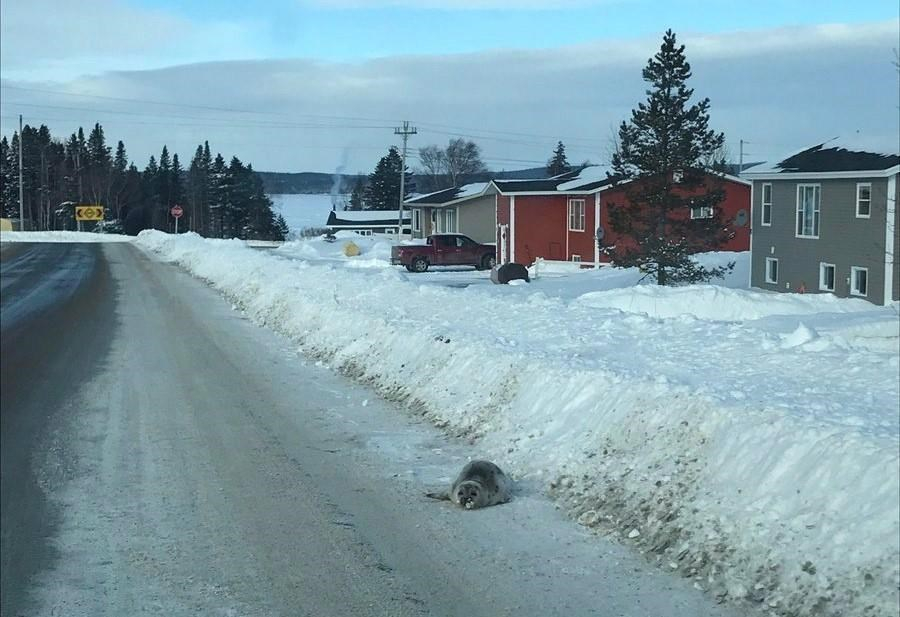 A seal is shown on a road in Roddickton, N.L. in a handout photo. Handout photo by Brendon Fitzpatrick
Previous story

Fisheries officials have rescued eight seals from a small Newfoundland town that's been overrun by dozens of the blubbery mammals for over a week.

Roddickton Mayor Sheila Fitzgerald said there are still plenty of wayward seals roaming the town, but she's happy the Fisheries Department is working hard to catch and return them to the ocean.

"I'm looking forward to having 40 less seal residents in this area," she said Sunday. "It's just been overwhelming."

Located on Newfoundland's Great Northern Peninsula, Roddickton is at the edge of an inlet that has trapped a group of around 40 harp seals in the area after it froze over, leaving them hungry and disoriented.

Fitzgerald said it's not uncommon for the town to get some whiskered visitors, explaining that seals tend to come in and out of the inlet as the ice floe shifts in the region's waters.

But the sudden proliferation of seals crawling into yards and roadways this winter has drawn a lot of concern from both her and Roddickton residents — especially as the animals grew wearier and began crying out as the days went by.

"I've been here for over 25 years. I have never, ever, seen this many seals get trapped inside the ice, when it forms, and get stranded here in town," she said. "When you go to get gas, you see seals by the gas pump."

Fitzgerald said the town reached out to the Fisheries Department for help, and officers arrived a few days ago to assess the situation and work on getting them back to their habitat.

She said they're catching the seals with nets and driving them out to Englee, a community about 20 kilometres south, where they are being released into the ocean.

Some of Roddickton's residents, Fitzgerald said, have been helping officials catch the seals by herding the "wiggly" animals away from roads and into areas where they're easier to catch.

"It's been remarkable, the community's reactions to these seals stranded in town," she said. "(We) wanted to make sure these little critters — they're so cute — didn't have anything happen to them."

While they may be cute, the seals have been posing a nuisance and drawing safety concerns, Fitzgerald said, as they've been blocking roads, driveways, and doors, and residents were unable to move them because it's illegal to touch marine mammals.

As well, the seals' coats can blend in with the snowy roads, and drivers have reported several close calls. Two have been struck and killed by vehicles.

"The reality is, those seals weren't going to last ... the entire winter," she said. "They needed help, the issue wasn't going to go away on its own."

On Sunday, a Fisheries spokeswoman said officers have released eight seals so far and have collected two dead seals. Three of the eight seals had signs of an injury but were released without incident, while the other five appeared to be healthy.

Roddickton is home to 999 people, according to the most recent census, and is described on its website as "the moose capital of the world."

All well and good, and many

All well and good, and many many thanks to those who helped rescue and re-locate the seals.

Little kvetch: even more progress when we get to the point of doing things like this because of our respect for and understanding of animals, despite whether they're cute of not. They are equal citizens of the planet, and we owe them.