The air on cruise ships may be filthier than the world’s most polluted cities: study 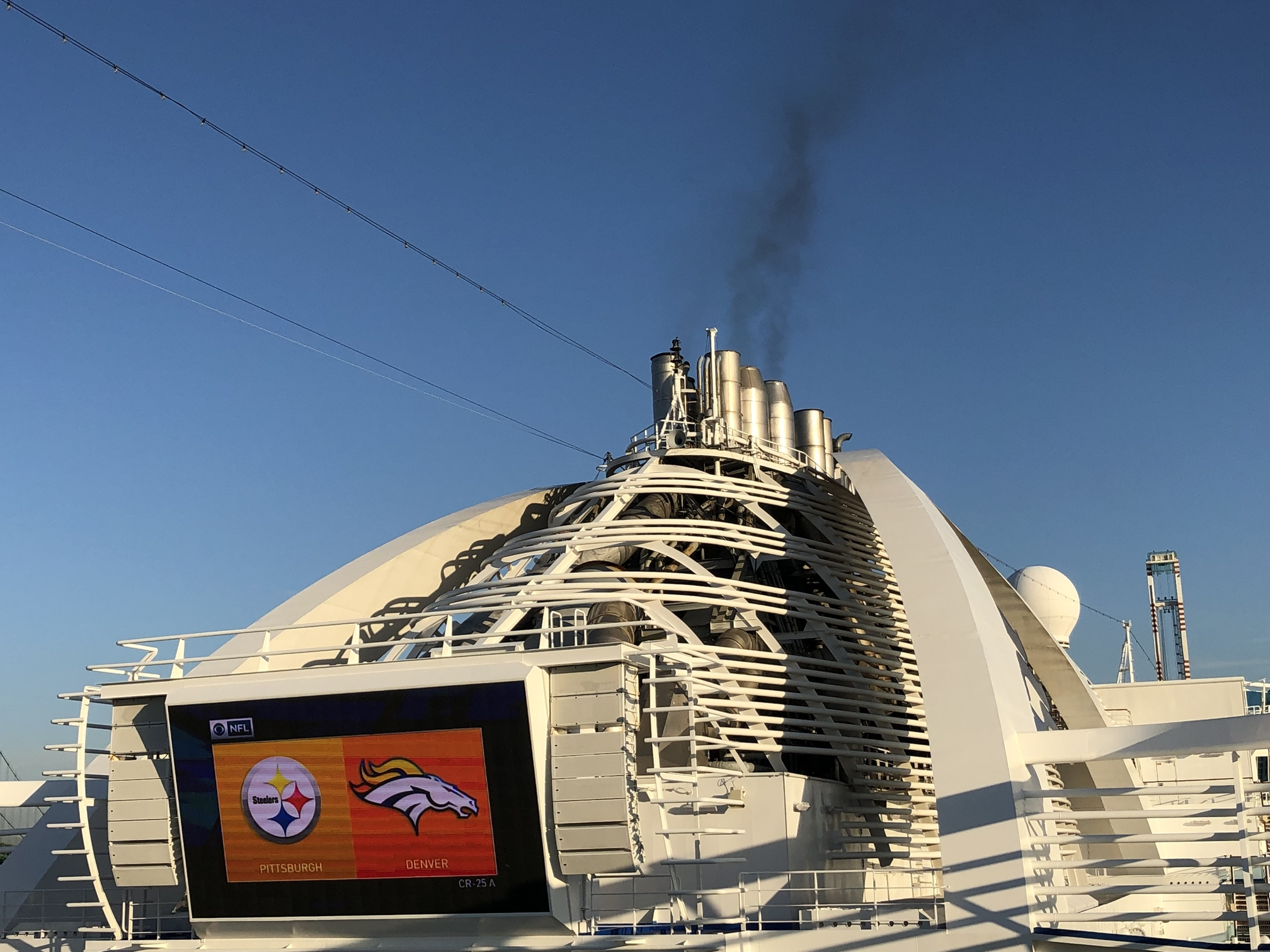 The Princess Cruises’ Emerald Princess cruise ship was one of four Carnival Corporation ships investigated in a new study about air pollution on cruise ships. It is seen here at the Port of Los Angeles in November 2018. Photo by Kendra Ulrich/Stand.earth
Previous story
Next story

Ryan Kennedy had never been on a cruise ship until two years ago when he embarked on four North American cruises armed with a P-TRAK Ultrafine Particle Counter. This device is a portable digital contraption. It measures minute particles of air pollution that, when inhaled, can cause harm to your heart and lungs.

Kennedy, an assistant professor at the Johns Hopkins University Bloomberg School of Public Health, is the author of a new study, released Thursday, which details the findings of a two-year study exposing poor air quality on four Carnival Corporation ships — the largest cruise operator in the world — including one that left Vancouver for Los Angeles in October 2018.

Kennedy measured air pollution every second for one minute and created an average for each minute for twenty minutes at time, during the day and night. His findings reveal that while all four ships were traveling at sea, average pollution particle counts were significantly higher at the stern — the area on a ship behind the smokestacks.

The lowest particle count across these four ships was 38,888 particles per cubic centimeter (pt/cc), while the highest was 157,716 pt/cc. Particle counts on the L.A.-bound ship got as high as 76,000 pt/cc while out at sea, the investigation found.

"It's very compelling data," Kennedy told reporters on a conference call from Baltimore, Maryland. "People who are predisposed with cardiovascular or pulmonary conditions are at greater risk."

It's dangerous. It's not a healthy thing for us to be exposed to."

'This is a pervasive health concern'

The study was commissioned by the international environmental organization Stand.earth, and is the first to measure air quality on cruise ships when docked at port and while moving at sea, during multi-day cruises. The research has not yet been submitted to a scientific journal for peer review, but Kennedy said he was considering this as a next step.

Ultrafine particulate pollution can be detrimental to human health because of increased toxicity. These particles are small enough to be inhaled into a person’s lungs and move into the bloodstream, where they can cause higher rates of cardiovascular disease and asthma, Kennedy explained.

Recent studies have suggested that the smallest ultrafine particles may be the most dangerous to human health, and that particulate matter from ship exhaust may be responsible for tens of thousands of annual deaths, according to the report.

In light of the study's findings, Stand.earth is calling on Carnival Corporation, which holds 40 per cent of the global market, to transition away from heavy fuel oil to power its ships, to help reduce ultrafine particulate pollution — and "to step up to the plate and clean up it's act," according to Kendra Ulrich, Stand.earth's senior shipping campaigner.

Of the 26.6 million people that went on cruises last year, nearly half, about 12 million people, went on a Carnival or one of its ten subsidiary cruise lines. Most of Carnival Corporation’s ships burn heavy fuel oil where allowable, according to the report. Heavy fuel oil is a toxic, "bottom of the barrel waste sludge leftover" from the refining process, Uldrich explained, and is often classified as hazardous waste.

Ulrich believes the findings have implications far beyond the passengers and workers on the cruise ships. It could impact those who live and work in port and coastal communities where the ship docks or passes. Some studies have shown approximately 70 per cent of ship emissions occur within 250 miles of land, she explained.

"What Dr. Kennedy found on board was shocking," Ulrich told reporters on the same conference call, noting that the stern — where the highest pollution levels were found — is usually where running tracks, swimming pools or lounge areas are located on a cruise ship, where people spend the most time. "But, this is a pervasive health concern that extends far beyond the short term acute health exposures on the ship."

Ulrich is urging Carnival Corporation to switch to a cleaner-burning fuel while installing filters to help reduce ultrafine particulate pollution, and eventually transition away from fossil-fuel powered ships completely.

Kennedy told reporters that there were limitations to his study, in that he conducted it inconspicuously so as to not disrupt cruise passengers and workers. His study measured emissions aboard only four ships, over short intervals rather than extended periods. He told reporters that the potential health impacts from particulate matter can also differ depending on how long someone is exposed to it.

But, Kennedy said he "made every effort to be consistent with my methods across environments. But I wasn’t able to measure everything, everywhere, always."

The report goes on to say that the size of the particulate matter measured by Kennedy's device "aligns closely with the size of particles known to be generated by ship engines, and the ship's exhaust system is located between the environments" in question in the study, "suggesting the particulate matter is likely, in part, the ship's engine exhaust."

But, the study also says that "there is not universal agreement on how to measure or report particulate matter," and that there remain unknowns in the study, including which fuel types were used by the ships and how efficient the engines were. The report also notes that higher winds could play a factor in the disparity between measurements in the front and back of the ships, at port and at sea.

In an email statement to National Observer, a Carnival Corporation spokesman responded to the study, saying "these so-called fly-by tests are completely ridiculous, inaccurate and in no way represent reality."

"We test the air quality of our ships and they meet or exceed every requirement," the spokesman said. "The air quality on our ship decks when in port compares favorably with a typical urban or suburban environment. Independent testing on our funnels — which is the area where the exhaust originates — further validates our claims."

The company declined to answer questions about how they test the air quality.

The spokesman told National Observer that they have installed Advanced Air Quality Systems on nearly 80 per cent of its global fleet, as required by the United States Environmental Protection Agency, "so these systems are environmentally friendly, in addition to rolling out new ships powered by LNG, the cleanest burning fuel available, so their study is misleading and inaccurate."

The company added in their statement that Stand.Earth is creating "fake tests that really have no scientific basis," to aid in their fundraising efforts. The organization, the statement said, "is constantly in search of a problem in our industry."

Some cruise ships and shipping lines began phasing out bunker fuel as the International Maritime Organization — a body of the United Nations — gears up to implement rules in 2020 that will require ships to either install expensive scrubbers or switch to different fuels.

Did a green development project drive up the rent in a Montreal neighbourhood?

In the '80's &'90's I traveled on a variety of cruise ships - Some Carnival and a few other lines. From my very first voyage I was aware that the aft decks were miserable places to be. Not only could one smell/be nauseated by the exhaust, one would find soot particles deposited on clothing and body. This was avoidable by always being forward on the ship. This article does not comment on the frequency of complaints from the internal air circulation. These range from Legionnaires disease, to a multitude of other ills. Cruise ships appear to be floating palaces of pathogens.

Among other reasons for not patronizing cruise ships is that the proliferation of these polluting behemoths only adds further stress to our beleaguered oceans and other environmental ills in their ports of call. - from illegal dumping of waste and ballast water, to lethal erosion from their wakes in places like Venice.
I am no longer at all tempted to embark on a cruise.