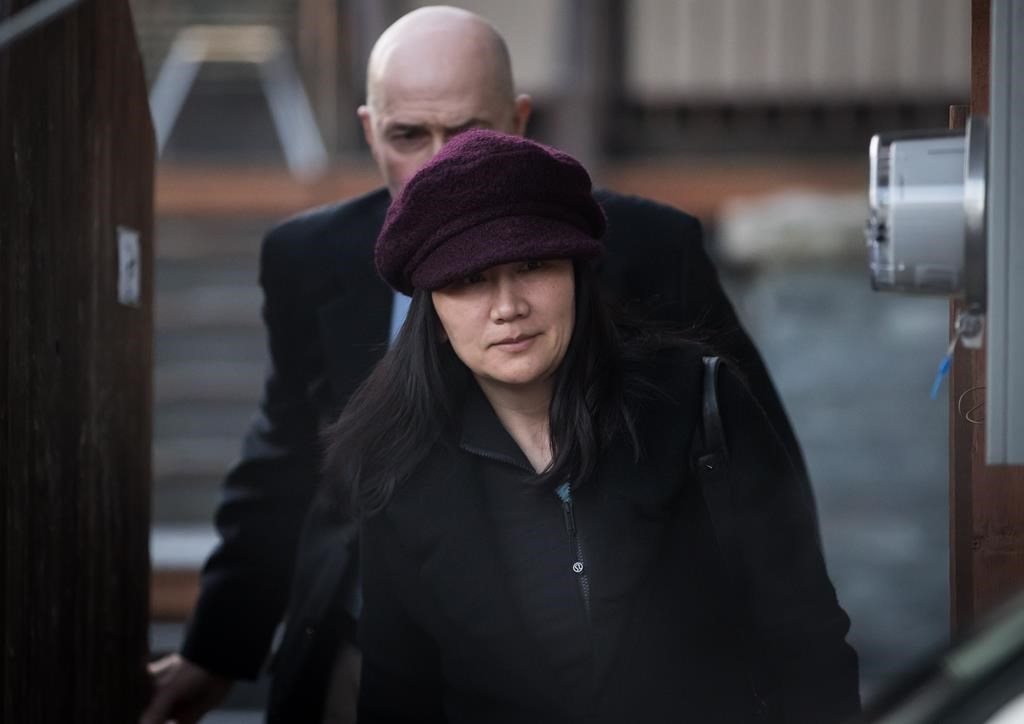 Huawei chief financial officer Meng Wanzhou leaves her home to attend a court appearance regarding her bail conditions, in Vancouver, on Jan. 29, 2019. Photo by The Canadian Press/Darryl Dyck
Previous story

The clock is ticking for Canada to decide whether to proceed with a high-profile extradition case involving a senior executive of Huawei Technologies, which has touched off furor in diplomatic relations with China.

A British Columbia court heard Tuesday that the United States has issued a formal extradition request for Meng Wanzhou, the company's chief financial officer and daughter of its founder. Meng was arrested Dec. 1 at Vancouver's airport on a request from U.S. authorities.

Canada's Department of Justice now has until March 1 to determine whether to issue an authority to proceed, which authorizes an extradition hearing. If Canada issues that authority, Meng would next appear in court March 6 and hearing dates would be set.

"I have no idea whether we're looking at months or years," he said. "At this point, that's completely unknown. It will become clearer as time progresses."

Canada has a treaty with the U.S. that obligates it to co-operate with extradition requests. The treaty requires that the conduct for which extradition is sought be considered criminal in both countries.

If an extradition hearing is held and a judge commits Meng for extradition, Justice Minister David Lametti would ultimately determine whether she would be extradited to face charges of bank fraud, wire fraud and two counts of conspiracy to commit both.

Speaking to reporters in Ottawa, Lametti acknowledged legal procedures can be complex.

"By the time all the individual's rights are exhausted they can take a long time," he added.

"I only will have to make a decision at the end of the process, if and only if there is an actual extradition order. I would have the final say in executing that order, yes."

The U.S. Department of Justice laid out its case Monday against Meng and Huawei. Both Meng and the company have denied any wrongdoing.

The indictment, based on 23 grand jury allegations, accuses Huawei and Meng of misrepresenting their ownership of a Hong Kong-based subsidiary between 2007 and 2017 in an effort to circumvent U.S. sanctions against Iran.

Meng, 46, has been free on bail since Dec. 11, living in one of her two multimillion dollar homes in Vancouver while wearing an electronic tracking device and being monitored by a security company.

Meng and her husband provided $7.5 million in cash for the $10-million bail and the rest was covered by four sureties, including three people who put up their homes as a deposit and a fourth who brought a $50,000 certified cheque to the court.

On Tuesday, Ehrcke agreed to replace the woman who brought the cheque with a couple who have agreed to put up their home and some money as a surety.

The court also heard that Meng has beefed up her defence team. In addition to criminal defence lawyer David Martin, she will also be represented by several other attorneys including Vancouver-based Richard Peck and associates from his firm.

Peck is known for acting as an independent prosecutor for Ontario in the dangerous driving and negligence case against former attorney general Michael Bryant in the death of a cyclist, in which Crown prosecutors ultimately withdrew the charges. He later worked as a special prosecutor for B.C. in the death of Robert Dziekanski, a Polish immigrant who died after police stunned him with a Taser in Vancouver's airport.

Also joining the team is Toronto-based criminal defence lawyer Scott Fenton. He represented David Del Mastro, who was acquitted of running a scheme to funnel money to the political campaign of his cousin, former Conservative MP Dean Del Mastro.

Meng did not comment as she rushed from court Tuesday to a black SUV waiting for her in a parkade.

China's foreign ministry said in a statement Tuesday that the U.S. is using its national power to "tarnish the image of and crack down on specific Chinese companies in an attempt to strangle their lawful and legitimate operations."

"We once again urge the U.S. side to immediately drop its arrest warrant and formal extradition request for Ms. Meng Wanzhou," it said.

"We also urge the Canadian side to take China's solemn position seriously, immediately release Ms. Meng Wanzhou and ensure her lawful and legitimate rights and interests, and stop pulling the chestnuts out of the fire for the U.S."

— With files from Mia Rabson and Mike Blanchfield in Ottawa and James McCarten in Washington, D.C.