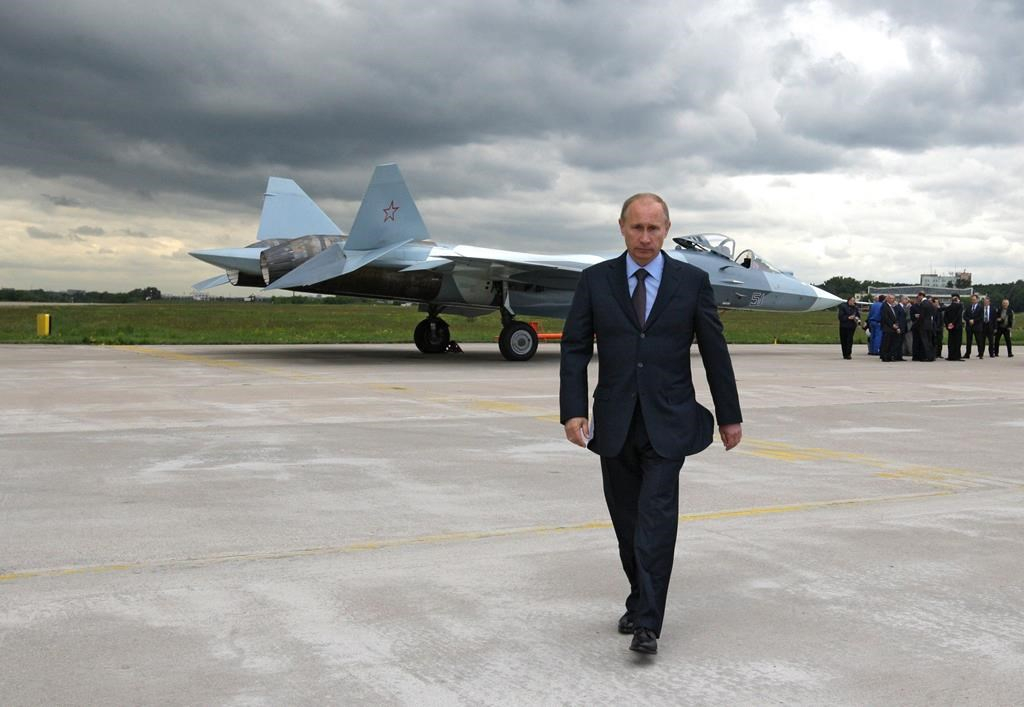 Recent Russian moves in the Arctic have renewed debate over that country's intentions and Canada's own status at the top of the world.

The newspaper Izvestia reported late last month that Russia's military will resume fighter patrols to the North Pole for the first time in 30 years. The patrols will be in addition to regular bomber flights up to the edge of U.S. and Canadian airspace.

"It's clearly sending strategic messaging," said Whitney Lackenbauer, an Arctic expert and history professor at the University of Waterloo. "This is the next step."

Russia has been beefing up both its civilian and military capabilities in its north for a decade.

Bomber patrols have been steady. NORAD has reported up to 20 sightings and 19 intercepts a year.

Commercial infrastructure has kept pace as well. A vast new gas field has been opened in the Yamal Peninsula on the central Russian coast. Control and development of the Northern Sea Route — Russia's equivalent of the Northwest Passage — has been given to a central government agency. Russian news sources say cargo volume is expected to grow to 40 million tonnes in 2020 from 7.5 million tonnes in 2016.

Canada has little to compare.

A road has been completed to the Arctic coast at Tuktoyaktuk in the Northwest Territories and work for a port at Iqaluit in Nunavut is underway. The first Arctic patrol vessel has been launched, satellite surveillance has been enhanced and a naval refuelling station built on Baffin Island.

No all-weather roads exist down the Mackenzie Valley or into the mineral-rich central N.W.T. Modern needs such as high-speed internet are still dreams in most of the North. A new icebreaker has been delayed.

Nearing the end of its term, the Liberal government has yet to table an official Arctic policy.

Global Affairs Canada spokesman Richard Walker said in an email that the government is "firmly asserting" its presence in the North to protect Canada's sovereign Arctic territory.

Walker said Canada cooperates with all Arctic Council members, including Russia, to advance shared interests that include sustainable development, the roles of Indigenous peoples, environmental protection and scientific research.

"Given the harsh environment and the high cost of Arctic operations, Canada believes that cooperation amongst Arctic nations is essential," Walker wrote.

"While we perceive no immediate military threat in the Arctic region, we remain vigilant in our surveillance of our Northern approaches."

Canada needs to keep pace if only because it can't count on the current international order to hold, said John Higginbotham of the Centre for International Governance Innovation in Waterloo.

"If the globalized system fragments, we're going to get a world of blocs. The blocs will have power to close international shipping channels.

"It's a dreadful strategic mistake for Canada to give up our own sea route."

Arctic dominance would also give Russia a potent card to play, said Rob Huebert of the Centre for Military and Strategic Studies at the University of Calgary.

"It gives you presence," he said. "Whenever there's issues that happen to occur elsewhere, we've already seen the behaviour of the Russians — they start doing overflights of other countries to bring pressure."

Norway, the Baltics and the United Kingdom have all reported increased airspace violations, Huebert said.

Few expect Russian troops to come pouring over the North Pole. The country is sticking with a United Nations process for drawing borders in Arctic waters and is a productive member of the eight-nation Arctic Council.

"There's vigorous debate over whether their posture is offensive-oriented," Lackenbauer said. "The Russians insist this is purely defensive. It also offers possibilities for safe and secure shipping in the Northern Sea Route.

"They're not doing anything wrong."

Canada would be mistaken to ignore the awakening bear, said Ron Wallace of the Canadian Global Affairs Institute in Calgary.

"It's important for Canadians to be aware of their Arctic and the circumpolar Arctic and what's going on in the North," he said.

Canada is unlikely to take much from Russia's command-and-control style of development, Wallace said, but there are lessons to learn. Combining civilian and military infrastructure is one of them.

"That's the kind of thinking I haven't seen here, but that's the thinking the Russians are using," he said. "They see the northern trade route as an excuse to put up military bases at the same time they're working with the Chinese to open up trade routes for the export of their resources."

"Somewhere in the middle there is a better policy for northern Canada."