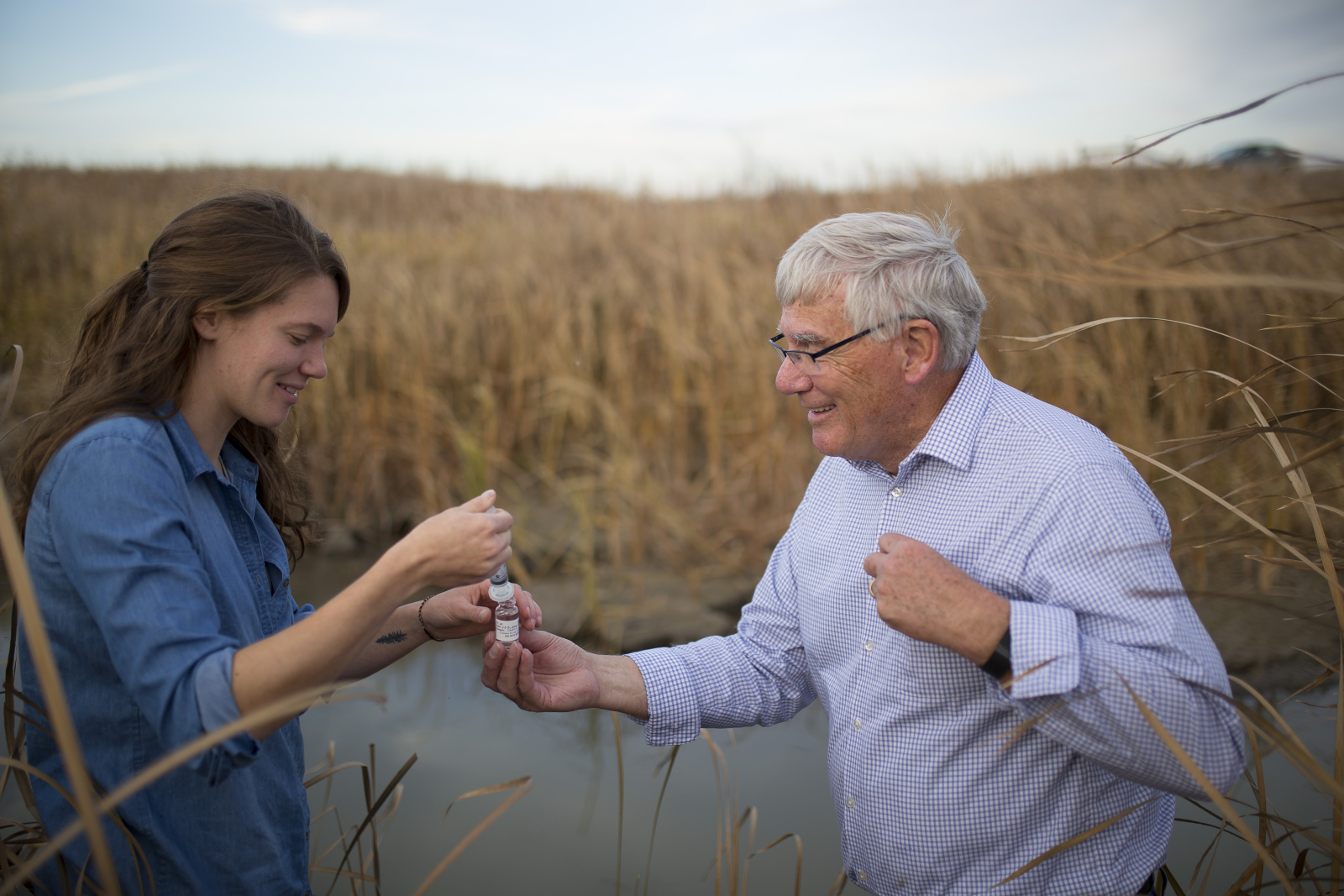 The blue-green algae deposits slime on Lake Winnipeg’s shores and sucks oxygen from the water, killing animal life and endangering humans with toxins that can attack the liver or nervous system.

The growth of this bacteria is fed by spikes in phosphorus in the water supply, stemming from industrial activity like fertilizers used in agriculture or lawn care, septic systems and other sources that leach into lakes and rivers.

It's difficult to pinpoint exactly where this phosphorus comes from, however. That’s because the watershed of Lake Winnipeg covers almost a million square kilometres, stretching from western Alberta to Ontario, and dipping below the U.S. border.

A five-year, $18-million program by the federal government barely made a dent in phosphorus levels, in part due to how it arrives at the lake from such a wide area. The program wrapped up in 2017 with a conclusion that more evidence is needed to determine where actions could best make an impact.

The Lake Winnipeg Foundation, an environmental group that wants to improve the lake's health, co-ordinated the establishment of the Lake Winnipeg Community-Based Monitoring Network, which organized conservation groups and “citizen scientists” in Manitoba to collect water samples.

These volunteers bring samples and location data to a lab run by Lake Winnipeg Foundation staff and science advisors, in order to map out where there are disproportionate amounts of phosphorus in the lake.

Next month, these volunteers will be able to use a new online system to collect, share and securely store community water quality monitoring data that was designed by the Gordon Foundation, a Toronto-based organization dedicated to freshwater management.

The datastream projects have helped address the haphazard storage of water quality records in Canada. Water quality monitoring groups had been storing their findings in such inaccessible formats as personal computer hard drives, local storage devices or on sheets of paper.

Some data has even been kept in a shoebox, said Emma Wattie, director of the Atlantic Water Network, an umbrella group for 40 organizations across Atlantic Canada who formed their own water quality monitoring programs.

The Gordon Foundation has been using blockchain technology to provide a secure method of verifying information on its datastreams. It is developing a new one for Lake Winnipeg, where data that was sampled by the Lake Winnipeg Community-Based Monitoring Network can be uploaded and made accessible to all.

The foundation plans to unveil its latest project to Manitoba water quality monitors on Feb. 19, with a formal launch scheduled for March 20, said Carolyn DuBois, the group's water program director.

The Lake Winnipeg Foundation is "super organized, there’s a lot of energy, they’re providing all sorts of supports for the community, including training and lab services,” said DuBois in an interview. “That is something for us to plug into and be able to take off from.”

For the Lake Winnipeg Foundation, it was important to make data easily accessible. "Having scientifically robust data available creates opportunities to target action and funding, which in turn, will help improve water management across the province," said executive director Alexis Kanu.

Canada is home to seven per cent of the planet’s accessible freshwater, and a fifth of total freshwater resources. Both wildlife and humans rely on freshwater to live, eat and drink.

But Canada’s freshwater is in trouble. WWF-Canada has found that all 167 sub-watersheds nationwide are threatened. They have also tracked a major decline in species in Canada, particularly freshwater species.

When the organization tried to put together a report on the health of Canada’s watersheds in 2017, however, they found that over half of the sub-watersheds they examined didn’t have sufficient information to make judgements on water quality.

“We found a profound lack of data,” president and CEO Megan Leslie told a Halifax crowd in September about the report. “Plants (that freshwater species) eat, the habitat they live in, are linked to freshwater; how is it we can reverse decline of wildlife if we don’t have data?”

For years, there have been dozens of water quality monitoring groups in operation in Canada — although researchers say they don’t know precisely how many. Two academic surveys of monitoring groups in 2017 and 2018 received 123 and 146 responses, for example. But the issue of isolated storage has persisted.

“There are some groups who had no idea that they were actually monitoring on the same lake, or monitoring the same watershed,” said Wattie in Halifax. She said about half of Atlantic Canada’s watersheds either have poor quality data or insufficient data.

As well, while there is a general understanding about how data is associated with a publication in a scientific journal, said DuBois, some water quality monitors have been uneasy with uploading their data, for a number of reasons ranging from a desire to maintain authorship, to fears about it being tampered with once online.

From the Mackenzie to the Atlantic

In 2015, the Gordon Foundation had heard about the lack of data affecting the ability of Indigenous communities in the north to keep track of their freshwater and fish.

“People couldn’t really make effective decisions around watersheds, or around policy, around evidence-based decisions, without that data being shared,” said Sherry Campbell, Gordon Foundation president and CEO, at the Halifax event.

The online platform, which came to be known as Mackenzie Datastream, allowed the public to view and download water quality data eventually for the whole Mackenzie drainage basin.

A year later, in November 2016, Mackenzie Datastream was officially launched. A pair of northern events, held on Nov. 9 in Yellowknife and Fort Smith, N.W.T., as well as an official launch in Ottawa on Nov. 22, marked the occasion. “That’s when word really started to get out,” said DuBois. The foundation began hearing from other First Nations and scientific researchers, she said, wondering whether the platform could work for them too.

In January 2017, Wattie of the Atlantic Water Network partnered with WWF-Canada to bring water quality monitoring groups to Moncton, New Brunswick to discuss Atlantic Canada data management. She invited the Gordon Foundation to give a presentation on the datastream platform.

“The reaction from the crowd after the demo of datastream was just awe. People were so excited...asking, ‘Can we have that too?’” said Wattie.

Atlantic Datastream was launched in 2018, built in partnership with the Atlantic Water Network. Similar to Mackenzie Datastream, it offers a platform where water quality datasets are presented online, free for anyone to view and download.

The datastream platforms now use blockchain, the technology behind cryptocurrencies like bitcoin.

Blockchain is essentially a decentralized, digital record of transactions that allows a community to see who is adding all bits of information to the chain, meaning inaccurate data can be quickly targeted and removed.

The technology solved a problem that had plagued the Gordon Foundation team in the early days of creating datastream projects: fears about how the data could remain free from tampering.

“Surprisingly, that came up a lot. People were worried, ‘Well, how are you going to make sure the data is secure?’” said DuBois.

“Blockchain is able to show anybody that the data they’re accessing on datastream is, in fact, the same data that was uploaded by the original contributor. It’s like a fingerprint system for data.”

The expertise for the technology originally came from the Royal Bank of Canada. The bank had tested blockchain in 2017 to track payments between banks in Canada and the United States, and was eager to put its know-how to good use.

Valerie Chort, vice-president for corporate citizenship at RBC Canada, said the bank had been looking to deploy its technological prowess to help solve complex environmental issues.

“All of that...insight galvanized our employees to then share that knowledge more broadly,” she said. “We’ve got the perfect mix to be able to do some really innovative projects together.”

RBC helped design the technology that the Gordon Foundation is now using and developing. DuBois said while the bank’s personnel are no longer working with the foundation, they may continue to provide expertise in future.

The technology is also potentially game-changing for environmental organizations. WWF-Australia, for example, is looking at blockchain to trace minerals, while another WWF office is thinking of using it to trace seafood.

Editor’s note: Produced in collaboration with The Gordon Foundation. National Observer retains full and final editorial control over the reporting.

It is high time we had

It is high time we had accessible data on our water quality across the country; how can we save this essential resource if we don't know how much clean water we have left and where it is or is not?