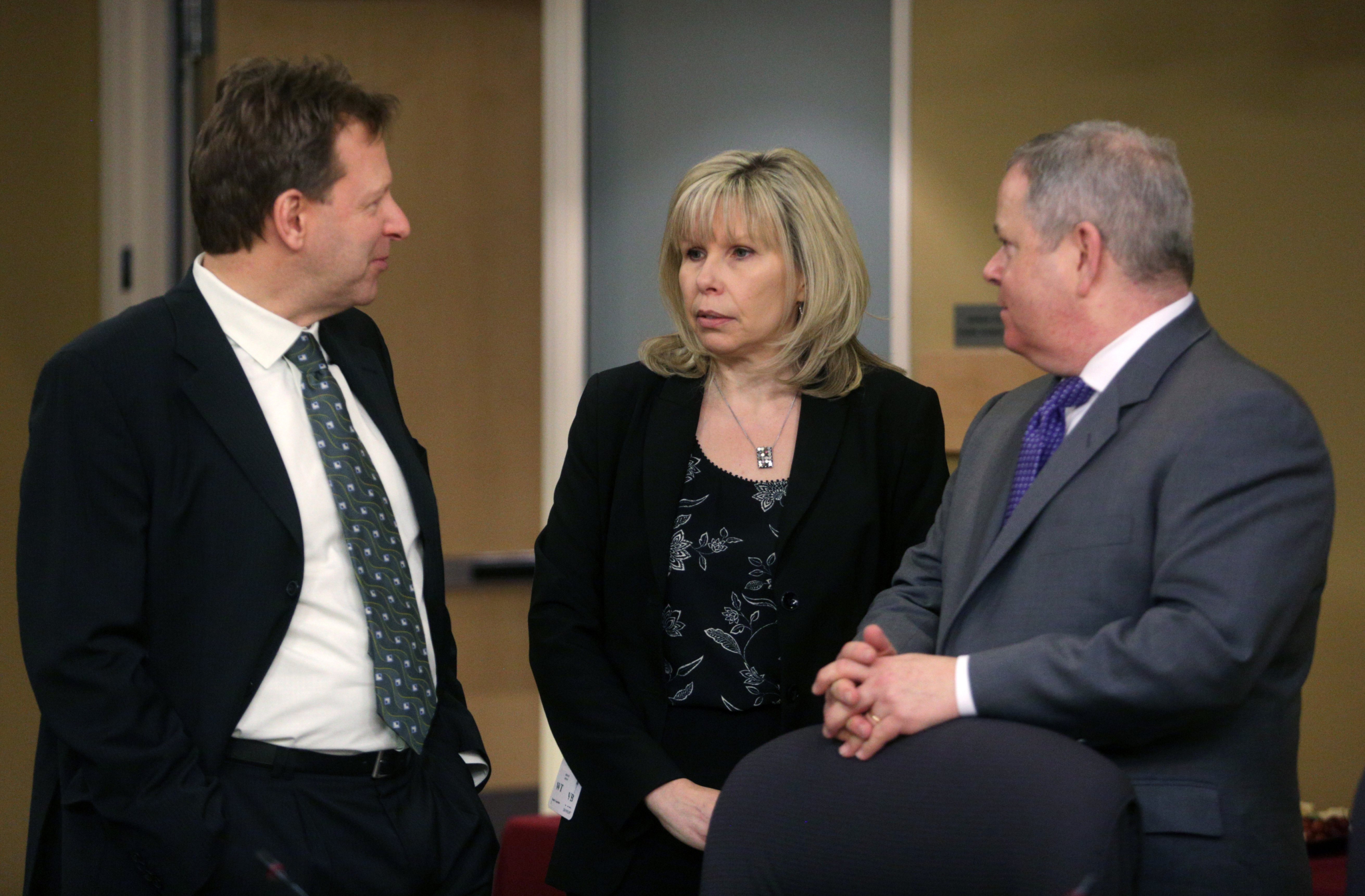 NEB chief environmental officer Robert Steedman chats with NEB vice-president of regulatory Sandy Lapointe and Jim Fox, NEB VP of strategy and analysis, prior to a Senate hearing in Ottawa on Feb. 7, 2019. Photo by Andrew Meade
Previous story
Next story

Canada's energy regulator, the National Energy Board (NEB), has dismissed a legal motion requesting that it consider all climate change impacts in its latest review of the Trans Mountain oil pipeline and tanker expansion project.

In a decision released on Tuesday, the regulator ruled out the motion from the environmental organization Stand.earth to "meaningfully consider the general impact" on greenhouse gas emissions and climate change associated with oil that would be transported on the proposed pipeline.

A separate NEB panel made an entirely different decision in 2017, requiring a larger evaluation of climate change impacts, during its review of the proposed Energy East pipeline, a project that was later terminated by its proponent, TransCanada.

The Trans Mountain project would expand an existing pipeline system, tripling capacity to transport up to 890,000 barrels of bitumen and other petroleum products from Alberta to a terminal in Burnaby, B.C.

This is the second time the NEB has been asked to review the Trans Mountain expansion project. The Trudeau government requested that it conduct this new review following a Federal Court of Appeal ruling in August that quashed the 2016 federal approval of the project.

The federal regulator said in its ruling that its reconsideration is designed only to address issues arising out of the Federal Court of Appeal ruling in August that set aside its previous approval.

It says Stand.earth's proposal missed its deadlines and repeated requests made by several other parties that had already been denied.

In a news release, Stand.earth says the NEB decision breaks an election pledge made in 2015 by the Liberals to give all energy projects a full climate review.

"The National Energy Board has denied this motion because the Trudeau government specifically excluded climate change impacts from a full review of this pipeline," said international program director Tzeporah Berman.

Editor's note: This article was updated at 10:30 a.m. ET on Feb. 20, 2019 with additional background and comments from the NEB and Stand.Earth.

This makes no sense to me.

This makes no sense to me. Canada has national and international commitments regarding GHG emissions reductions. These projects will obviously impact our ability to meet those commitments. Climate impacts should be considered as part of the review process.

I don't see the problem. See,

I don't see the problem. See, if you close your eyes, there is no problem. Simple.

It's not over, till it's over

It's not over, till it's over. The NEB will not have the final word on TMX

Has the NEB’s corporate culture evolved at all under the Liberals?

No pressure from the PMO of

No pressure from the PMO of course.

This all goes back to Harper

This all goes back to Harper and the gutting of environmental protections. And then when it came to the NEB and the TransMountain expansion, the NEB did not have to consider downstream emissions. So moving forward from 2013 to 2019, the NEB (stupid) decides that even today, 5 or 6 or more years later, they still do not need to consider downstream emissions eventhough Canada is a party to an international agreement to reduce emissions. Leave it to the appellate courts to consider the NEB's ignorance.

Trudeau has been in charge

Trudeau has been in charge for three and a half years. Why do you give him a bye? Bought in to his constant rhetoric about everything being Harper's fault? Balderdash!!! Trudeau can't stand on his own track record? Light a joint and dream along with him. By and large his pre-election promises were projections of his ideological dreams.....but without passing, what have been Mr. Trudeau's accomplishments besides pot?