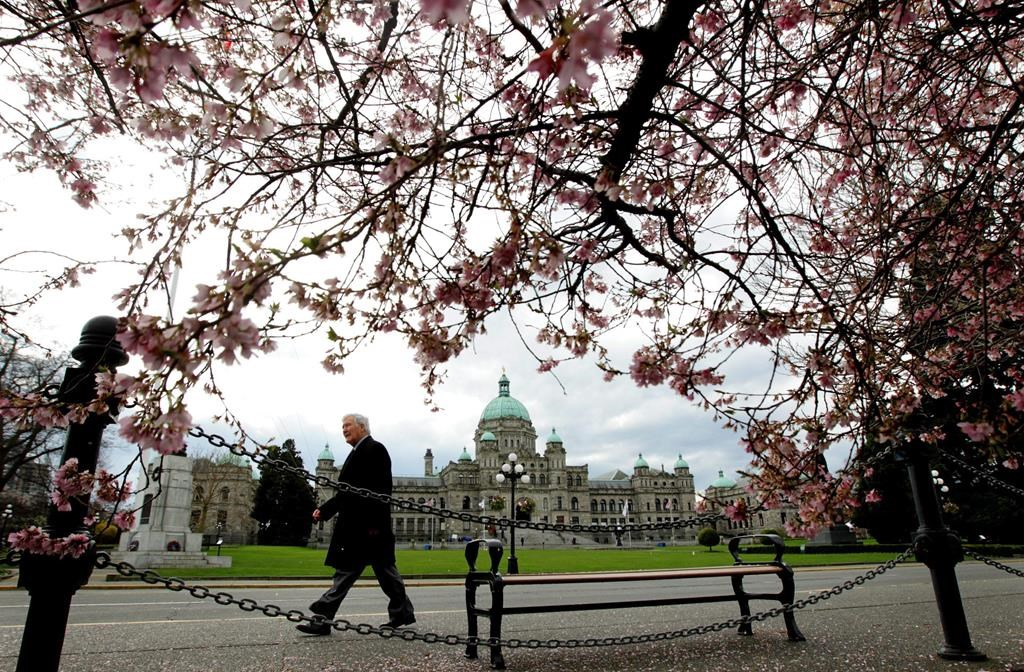 The British Columbia Legislature is framed by cherry blossoms as a pedestrian passes by in Victoria, B.C., on March 2, 2010. File photo by The Canadian Press/Darryl Dyck
Previous story
Next story

Victoria's trademark cherry blossoms may be lost in a few years as the city goes ahead with a plan to replace aging non-native trees with native species.

City councillors in the B.C. capital this week approved a spending increase for Victoria's Urban Forest Master Plan, which one councillor said could result in a loss of a number of flower-bearing trees in the city.

Coun. Geoff Young said while he understands the need for tree maintenance, he is concerned after his colleagues approved a spending increase of $868,000 to a program that already spends $1.7 million a year.

"So many of our streets in our suburban neighbourhoods have been lined with these trees, which bear beautiful blossoms in the spring. And they are enormously picturesque and then the blossoms fall off almost like a snowfall in the spring," he said.

Young said he is sad with the push towards native species at the expense of non-native ones like the city's famous cherry trees.

While he doesn't want the city to be overrun with non-native species, at the same time he said a modest use of some of those plants is quite acceptable and adds a lot to quality of life.

Young said he wants to see the city have a discussion before moving ahead with the policy.

But Mayor Lisa Helps said a combination of development and climate change is starting to take a toll on the trees so it is "past time" for the city to make a significant investment in its urban forest.

As the non-native trees die, they will be replaced with native species that are drought-tolerant, she said, adding that the city will be taking a more "ecosystem-based approach.

"We have to deal in reality, not in fanciful thinking," she said.

Victoria's overall tree canopy coverage when last measured in 2013 was approximately 18 per cent, and the city hopes to increase this to 40-45 per cent over the next few decades.

"Over the next 30 to 40 years ... we have to be realistic in terms of meeting the very real climate change that is here," she said, adding that this means replacing non-native trees with more drought-tolerant species.

Coun. Laurel Collins said she hopes the city can both protect the cherry trees and increase canopy cover.

She said she plans on talking to Victoria's director of parks to see if there is a possibility of maintaining the iconic cherry trees and the legacy that surrounds them.

"The wonderful thing about our cherry trees is that there's a history in Victoria where the Japanese community actually fundraised and donated these trees," she said.

"So it is important that ... when they do get sick or need to be replaced that we are thinking about that history."