By National Observer | News, Politics | March 4th 2019
#120 of 138 articles from the Special Report: Secrets of Government 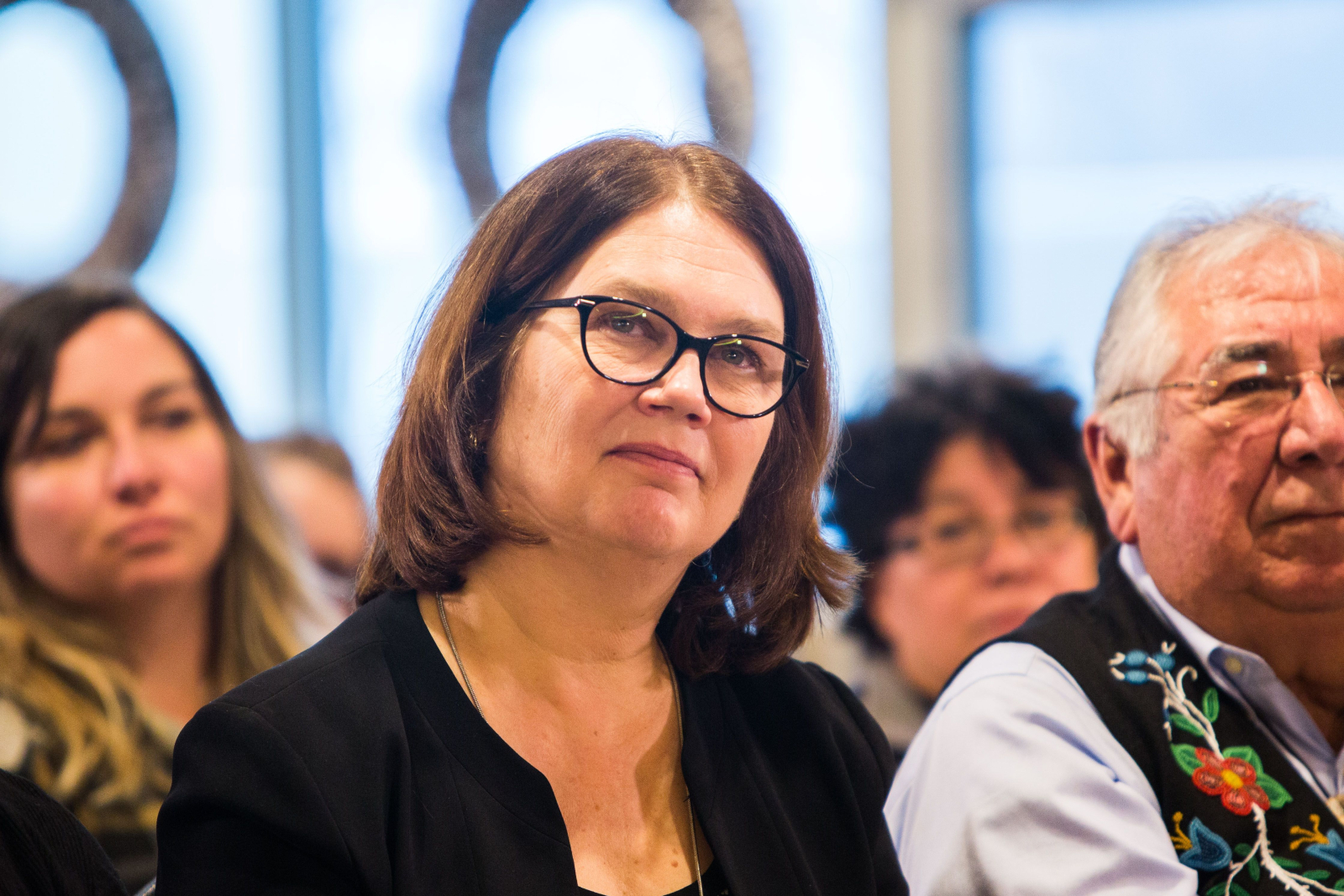 Jane Philpott speaks at an event in Ottawa on Jan. 22, 2018. File photo by Alex Tétreault
Previous story
Next story

Prime Minister Justin Trudeau's government suffered another major self-inflicted wound on Monday as he lost one of his most trusted cabinet ministers, Jane Philpott.

The Liberal MP for the Toronto-area riding of Markham-Stouffville announced her departure with a statement posted in the afternoon, only a few hours after she spoke at her last event as president of the Treasury Board.

The departure leaves the Trudeau government in a state of crisis, with senior Liberals apparently split over the government's handling of the SNC-Lavalin scandal.

Some, including Finance Minister Bill Morneau and Foreign Affairs Minister Chrystia Freeland, have openly supported Trudeau's position. Some have raised questions about the matter, while others have been silent.

The scandal began in February after the Globe and Mail reported that Trudeau and other government officials inappropriately tried to interfere with a decision by former attorney general Jody Wilson-Raybould not to offer a plea deal to the company in order to help it avoid a trial and a criminal conviction on corruption charges.

A few days prior to Philpott's resignation, Wilson-Raybould had testified at parliamentary hearings, detailing how Trudeau and other government officials had raised electoral considerations and jobs in repeated efforts to persuade her to intervene in the prosecution of SNC-Lavalin, after she had said she wouldn't do it.

Trudeau says he knew how Philpott felt for some time

By Monday, the scandal continued to wreak havoc on the government, overshadowing a major rally featuring Trudeau in Toronto that was meant to highlight the Liberal government's actions to fight climate change and make polluters pay.

Instead, most were waiting to hear Trudeau react to the latest resignation. He told the crowd that he was disappointed by Philpott's decision, adding that he knew how she felt for some time and that many questions remained unanswered about the issue.

In her resignation letter, Philpott said that it was an honour for her to serve as a member of cabinet and make progress in areas such as Syrian refugees, medical assistance in dying, healthcare and improving infrastructure for First Nations.

However, she said recent events have forced her into "serious reflection" that led her to resign as a member of Trudeau's cabinet.

"In Canada, the constitutional convention of cabinet solidarity means, among other things, that ministers are expected to defend all cabinet decisions," Philpott said in her statement. "A minister must always be prepared to defend other ministers publicly, and must speak in support of the government and its policies. Given this convention and the current circumstances, it is untenable for me to continue to serve as a cabinet minister.

"Unfortunately, the evidence of efforts by politicians and/or officials to pressure the former attorney general to intervene in the criminal case involving SNC-Lavalin, and the evidence as to the content of those efforts have raised serious concerns for me. Those concerns have been augmented by the views expressed by my constituents and other Canadians."

It grieves me to resign from a portfolio where I was at work to deliver an important mandate. I must abide by my core values, my ethical responsibilities, constitutional obligations. There can be a cost to acting on one’s principles, but there is a bigger cost to abandoning them. pic.twitter.com/EwO5dtdgG6

Trudeau moved Wilson-Raybould in a cabinet shuffle in January, and she initially accepted a new position as minister of veterans affairs, but resigned in February over the scandal.

Philpott said that the independence and integrity of Canada's justice system was at stake.

"It is a fundamental doctrine of the rule of law that our attorney general should not be subjected to political pressure or interference regarding the exercise of her prosecutorial discretion in criminal cases," she said. "Sadly, I have lost confidence in how the government has dealt with this matter and in how it has responded to the issues raised.

"It grieves me to leave a portfolio where I was at work to deliver on an important mandate. But I must abide by my core values, my ethical responsibilities and constitutional obligations. There can be a cost to acting on one’s principles, but there is a bigger cost to abandoning them."

Philpott is the third minister to resign from Trudeau's cabinet, following Wilson-Raybould and Scott Brison, who told Trudeau in December that he was retiring from politics. Brison's departure triggered the shuffle that has triggered the scandal.

The latest stunning development in the SNC-Lavalin saga appeared to force remaining members of his cabinet to publicly state their confidence in the prime minister through messages posted on social media. All of this is happening at a time when the Trudeau Liberals are less than eight months away from facing Canadian voters in a general election.

Philpott's announcement came after she appeared at an event earlier in the day to discuss artificial intelligence, but declined to answer questions from reporters about the SNC-Lavalin issue.

Soon after Philpott's bombshell, Wilson-Raybould tweeted some words of support, describing the outgoing treasury board president as a "mother of country."

"For almost four years our country has witnessed your constant and unassailable commitment to always doing what is right and best for Canadians," Wilson-Raybould said. "You are a leader of vision and strength and I look forward to continuing to work alongside you."

Her reaction echoed Philpott's own message of support for Wilson-Raybould, after the latter resigned her position as minister of veterans affairs.

To the incomparable @janephilpott, truly the #MOC...For almost 4 years our country has witnessed your constant & unassailable commitment to always doing what is right & best for Cdns. You are a leader of vision & strength & I look forward to continuing to work alongside you. ❤️U. pic.twitter.com/bwL6ouQjSA

Philpott and Wilson-Raybould have both said they will remain in the Liberal caucus.

In a statement, Trudeau's office says the prime minister spoke with Philpott earlier in the day to inform him of her decision. He accepted the resignation and thanked Philpott for her years of service and dedication.

Trudeau has named Carla Qualtrough, currently minister of public services and procurement and accessibility, as the interim president of the treasury board.

Reacting to the news, Morneau noted that Philpott was a close personal friend of Wilson-Raybould. Those comments drew a rebuke from Conservative Deputy Leader Lisa Raitt, who called the finance minister a "pompous mansplainer."

Are you kidding me? You pompous mansplainer. The MINISTER said her problem was that she couldn’t tow the cabinet line and did the right thing to resign. But - you know how women are...... we are just so *emotional*. What an ass. https://t.co/FFNwyqgW1U

Opposition Conservative Leader Andrew Scheer reiterated his calls from last week for Trudeau to resign, adding that other cabinet ministers should consider whether they want to continue supporting the prime minister.

NDP Leader Jagmeet Singh reiterated his own calls for a public inquiry into the SNC-Lavalin matter.

"Jane Philpott has made her decision based on information she received from cabinet," he said. "Canadians deserve to know what happened as well."

During an emergency debate about the scandal in the House of Commons on Feb. 28, Green Leader Elizabeth May said that "the pattern and the culture of the power brokers" in Ottawa have not changed all that must, even though the faces have changed.

"There is an unfortunate tendency to decide, in powerful organizations like the PCO and the PMO, that if there is a problem in the way, we can find a workaround," May told the Commons. "If there is a law we do not like, we can skirt it. If there are problems of ethics, well maybe we can write some op-eds. I do not find that the culture has changed from the Harper years until now.

"We have an opportunity now to root out a big part of the problem. It is political, but it is also that the senior civil service in this country has become far too political. I would ask that in this House, in this emergency debate, we consider that the testimony of Michael Wernick and the testimony of the former attorney general provide a contrast in which she has all the credibility."

Editor's note: This article was updated at 11:23 p.m. with additional background information and new comments made on Friday evening by Prime Minister Justin Trudeau, and reaction from other politicians. It was updated again at 5:12 p.m. on March 5 with additional comments from Elizabeth May.

All will be forgotten when

All will be forgotten when Trudeau begins his election campaign promises. Christmas in October.