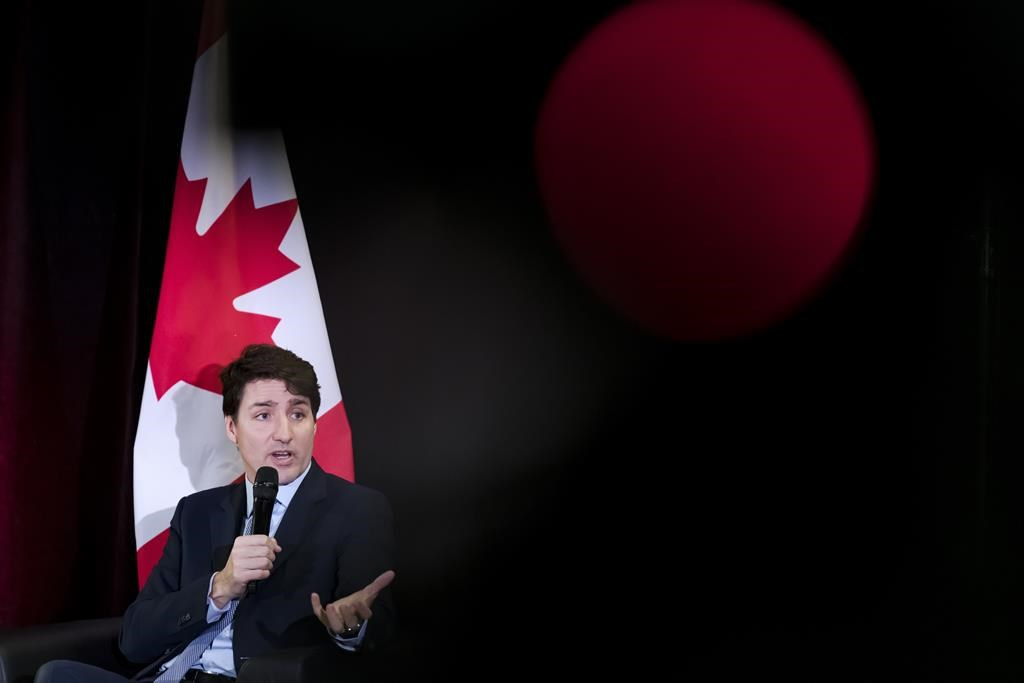 Prime Minister Justin Trudeau participates in an armchair discussion at the Prospectors & Developers Association of Canada Convention in Toronto on Tuesday, March 5, 2019. Photo by The Canadian Press/Christopher Katsarov
Previous story
Next story

Justin Trudeau hunkered down in the Prime Minister's Office Wednesday as he awaited what Liberals hope will be pivotal testimony Wednesday from his former principal secretary.

Liberals hope Gerald Butts will give them ammunition to fight back against accusations of political interference in the justice system.

One day after losing a second cabinet minister in less than a month over the government's handling of the SNC-Lavalin affair, Trudeau cancelled planned events Tuesday in Regina to return to Ottawa for what his office called "private meetings" — including with Canada's ambassador to Washington, David MacNaughton, a longtime political operative and adviser.

He'll be huddled in private meetings again Wednesday when his longtime friend and most trusted aide gives his side of the SNC-Lavalin story to the House of Commons justice committee.

The committee is also scheduled to hear a second time from the top public servant, Michael Wernick, and the deputy minister of justice, Nathalie Drouin, both of whom figured prominently in former attorney general Jody Wilson-Raybould's explosive testimony last week. She accused Trudeau, his senior staff, Wernick and Finance Minister Bill Morneau's office of inappropriately pressuring her to halt a criminal prosecution of SNC-Lavalin.

Trudeau's urge to stay close to home came one day after Treasury Board president Jane Philpott quit cabinet, saying she no longer had confidence in the government's handling of the SNC-Lavalin affair. Her departure followed that of her close friend Wilson-Raybould a month earlier.

After Wednesday's testimony, a spokesman for the prime minister said Trudeau and his team will reflect on "next steps." That is expected to include a statement from Trudeau — possibly as early as Wednesday but more likely not until Friday or early next week — offering his most comprehensive account yet of how the government handled the SNC-Lavalin matter and why.

"We'll be listening carefully to the voices, testimonies, and opinions expressed," Cameron Ahmad said. "There will be more to say in the coming days and weeks as we continue to reflect on next steps."

Since the furor erupted a month ago, Trudeau has offered only general denials of any wrongdoing. He has said he totally disagrees with Wilson-Raybould's characterization of events. He has insisted his government balanced the need to respect the independence of the judicial system with its concern about the potential loss of 9,000 jobs if the prosecution of the Montreal engineering giant went ahead. If it's convicted, SNC-Lavalin could be banned from federal contracts for 10 years.

It appears Trudeau has been waiting for Butts to do the heavy lifting of directly contradicting Wilson-Raybould's version of events before weighing in more fully himself.

Butts resigned from Trudeau's office last month, insisting neither he nor anyone else in the Prime Minister's Office had done anything wrong but saying he didn't want to be a distraction from the government's work. His letter of resignation suggested that he'd be freer to defend his reputation — and presumably that of Trudeau himself and his other senior staff — from outside the Prime Minister's Office.

After Wilson-Raybould's testimony last week, Butts asked to appear before the justice committee, where he said he would "produce relevant documents." He is expected to back up his version of events with emails, text messages and other documentation, much as Wilson-Raybould did in her testimony.

Wilson-Raybould testified last week that she was relentlessly pressured last fall to intervene with the director of public prosecutions to ensure a remediation agreement was negotiated with SNC-Lavalin. A remediation agreement is a kind of plea bargain that would force the company to pay stiff penalties but avoid a criminal conviction that could financially cripple it.

As attorney general, Wilson-Raybould could legally have instructed the director of public prosecutions to negotiate one with SNC-Lavalin.

Much of the controversy hinges on Wilson-Raybould's dual roles as attorney general (nominally a legal official with a responsibility only to the law) and as justice minister (a political executive who answered to the prime minister). She told the committee that she believes the pressure she faced was inappropriate but not illegal.

Wilson-Raybould also accused Wernick, the country's top public servant with a duty to remain non-partisan, of issuing "veiled threats" in mid-December that she could lose her post as justice minister and attorney general if she didn't acquiesce. She was moved to the veterans-affairs portfolio in a small cabinet shuffle a month later — a move she believed was punishment for her refusal to intervene in the SNC-Lavalin case.

Wernick, who previously testified that he believes no one improperly pressured Wilson-Raybould, is expected to address that accusation Wednesday.