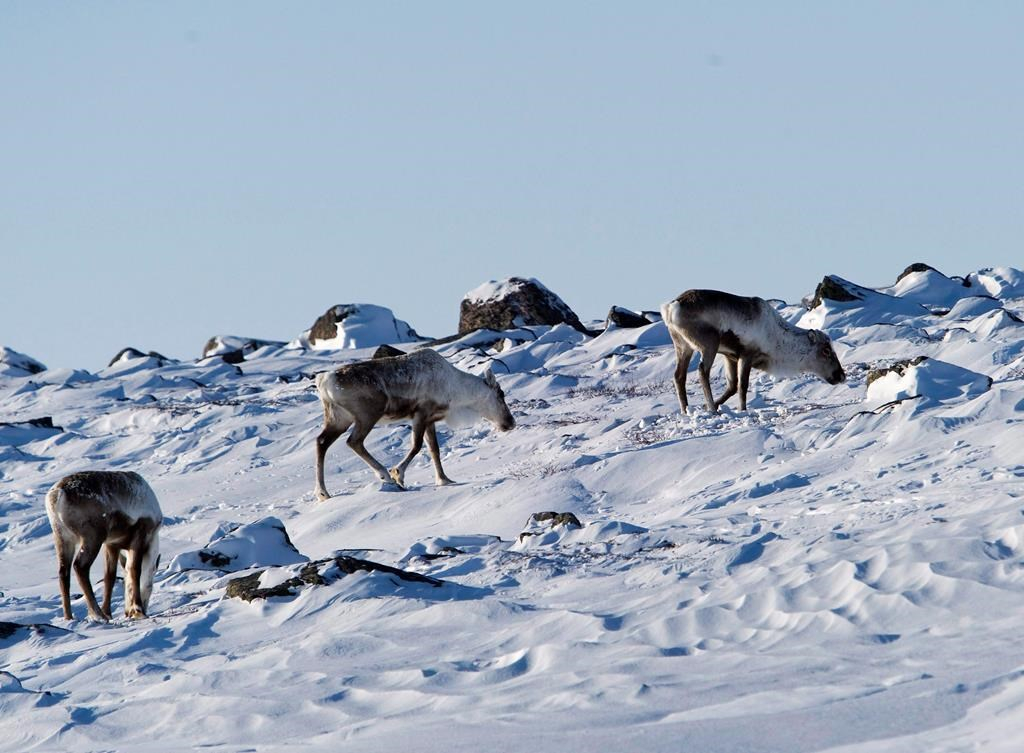 Wild caribou are seen near the Meadowbank Gold Mine in Nunavut on Monday, March 23, 2009. File photo by The Canadian Press/Nathan Denette
Previous story
Next story

Ottawa and the Northwest Territories have reached a deal on protecting threatened caribou.

But one environmental group calls so-called Section 11 agreements — draft versions of which have been reached with other provinces — plans to keep planning.

"I would have liked to have seen some more concrete actions," said Florence Daviet of the Canadian Parks and Wilderness Society.

On Wednesday, the federal government and the N.W.T. made an agreement that the territory would file range plans to conserve several herds of boreal caribou, which live in forested regions along the territory's western edge.

Those herds are some of Canada's healthiest — totalling 6,000 strong on habitat that is almost 70 per cent undisturbed, well above the federal threshold of 65 per cent.

"We're not going to wait until it's a situation where we're reacting instead of being proactive," said territorial Environment Minister Robert C. McLeod. "That's why we're doing this right now, so we don't get to that point."

Ottawa has agreed to give the territory $4.5 million to develop range plans, as well as determine sustainable harvest limits. The first of those plans is due as early as late summer.

Such agreements, allowed under Section 11 of the Species At Risk Act, have also been signed by Yukon and in draft form by Saskatchewan and British Columbia. Other provinces with caribou populations are in negotiations.

Such agreements were developed after all provinces failed two years ago to meet a five-year deadline to come up with firm plans for how they would keep caribou on the landscape.

Some herds, especially in Alberta and B.C., are down to a few dozen animals, while others have disappeared entirely.

"When you read the documents, they rarely if at all identify very concrete measures of protection," she said.

"It's more process and plans to get to plans. It is kind of disappointing."

Sean Fraser, the parliamentary secretary to Environment Minister Catherine McKenna, said there's more to them than that.

"It's not just stick a date on it and hope you cross it. We actually help provide the resources required to carry out the implementation of those range plans."

Ottawa hasn't ruled out using its power to step in and impose protection on vulnerable herds, he said.

"There are live conversations about whether those rather extraordinary remedies are going to be necessary. My strong preference would be to reach an agreement."

Talking is good, said Daviet. Action would be better — especially in jurisdictions where herds don't have much time.

"How long are they going to try to get more positive agreements with the provinces before they're willing to step in with something?"