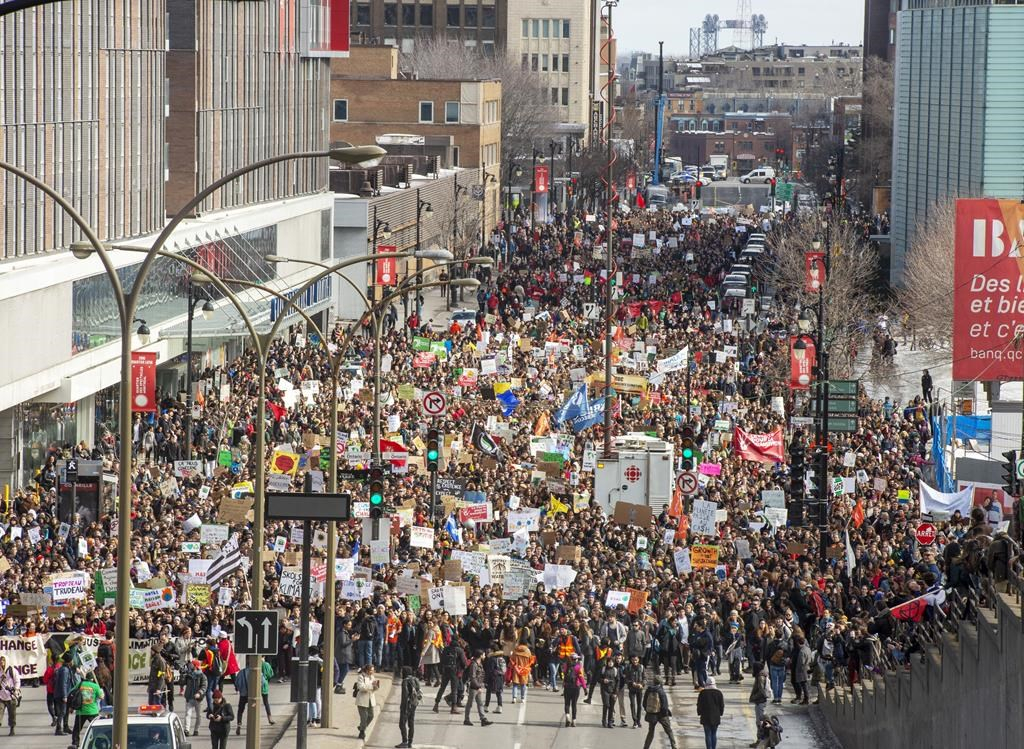 Students hold a demonstration to protest against climate change, on Friday, March 15, 2019 in Montreal. Photo by The Canadian Press/Ryan Remiorz
Previous story
Next story

A human wave of chanting, sign-waving protesters made their way downtown from the base of Montreal's Mount Royal on Friday as they joined a series of student-led marches around the world demanding that government take action on climate change.

A beating drum signalled the beginning of the march, which spanned several city blocks as thousands of students and other protesters denounced what they see as government's failure to take action to stop an impending climate crisis.

The protesters are demanding stronger government action on climate change, including a law to limit global warming to 1.5 degrees Celsius. Organizers said that under current commitments, the temperature could rise twice that much by 2020.

"Although individual actions are crucial, the fact is that collective and institutional decisions must be taken to reflect the seriousness of the situation," read a statement by a group of university organizers.

"While the student population is investing in education that is costly in money and time, in precarious conditions accentuated by indebtedness, unpaid internships and a culture of competitive performance, climate change is increasingly threatening the future for which they struggle."

The group said 150,000 students were on strike, representing 120 student associations.

Environment Minister Catherine McKenna praised the young Canadians participating in the marches and encouraged them to continue taking action for a more sustainable future.

"They know climate change is real, and that the cost of inaction is enormous," she said in a statement.

Quebec Premier Francois Legault also said he was encouraged by the message being sent by Quebec's youth. "We all live on the same planet, and it's an effort we have to do together," he said.

Other climate marches took place in cities including Quebec City, Ottawa, Toronto, Regina and Vancouver, as well as in close to 100 countries around the world.

Leilani Rocha, an 18-year-old student from St. Mary's High School in Pickering, Ont., said she's concerned that no level of government is taking the impacts of climate change seriously.

"This is an emergency," she said. "We need extreme change and to actually take action right now."

Rocha said she hopes the collective protests across the country send a message that youth are ready to make sacrifices in their lives to improve the environment.

-- With files from Shawn Jeffords