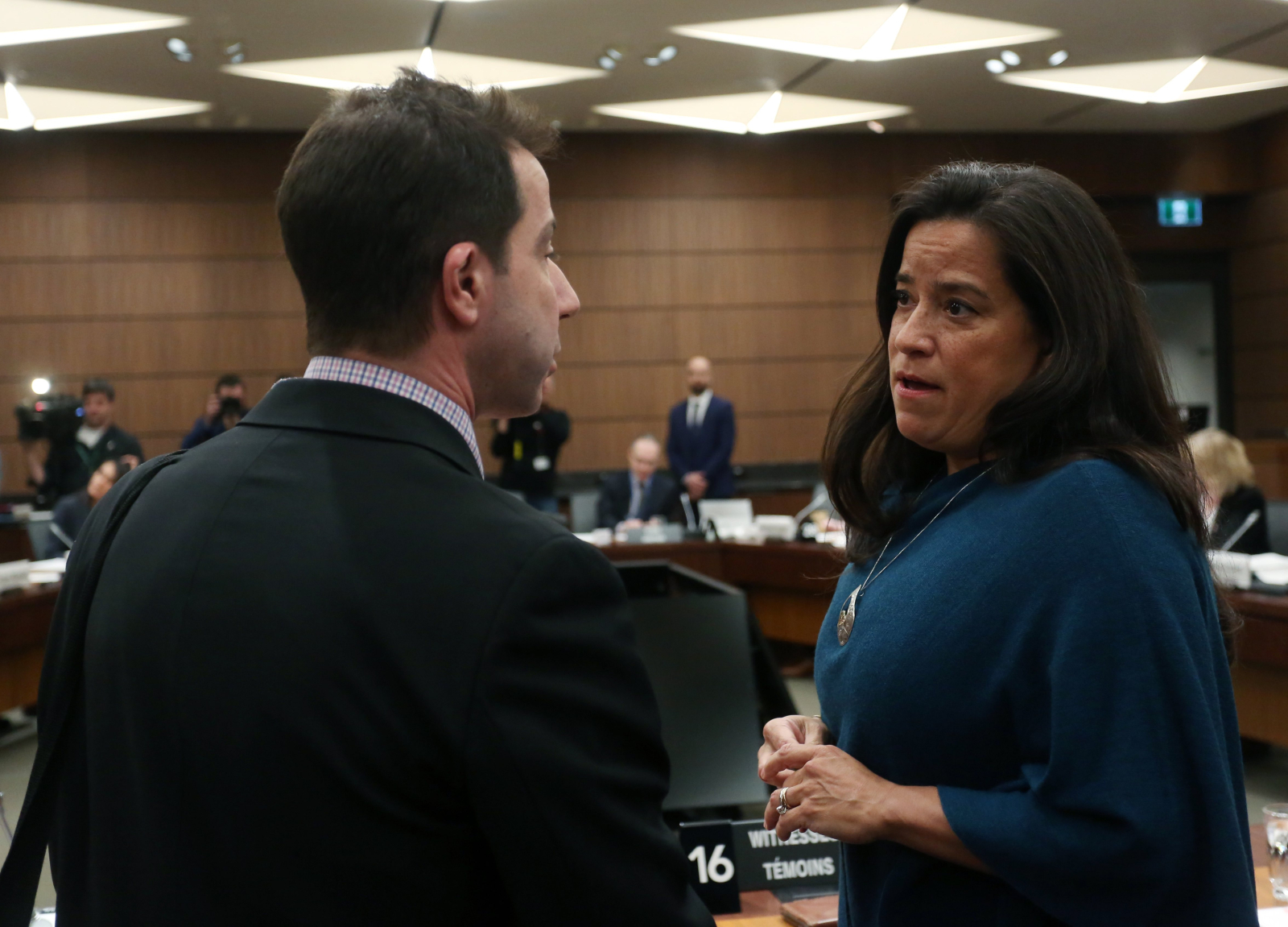 Jody Wilson-Raybould recommended in 2017 that Prime Minister Justin Trudeau nominate a conservative Manitoba judge to be chief justice of the Supreme Court, even though he wasn't a sitting member of the top court and had been a vocal critic of its activism on Charter of Rights issues, The Canadian Press has learned.

Well-placed sources say the former justice minister’s choice for chief justice was a moment of "significant disagreement" with Trudeau, who has touted the Liberals as "the party of the charter" and whose late father, Pierre Trudeau, spearheaded the drive to enshrine the Charter of Rights and Freedoms in the Constitution in 1982.

The sources spoke on condition of anonymity because they were not authorized to discuss internal discussions about a Supreme Court appointment, which are typically considered highly confidential.

For her part, Wilson-Raybould said Monday "there was no conflict between the PM and myself."

In an email, she characterized the matter as part of the normal process of appointing a Supreme Court justice, which involves "typically CONFIDENTIAL conversations and communications — back and forths between the PM and the AG (attorney general) on potential candidates for appointment."

She said she's "not at liberty to comment" on the "veracity" of what the sources said occurred, adding, "Commentary/reporting in this regard with respect to a SCC appointment(s) could compromise the integrity of the appointments process and potentially sitting justices."

The issue suggests Trudeau may have had reasons unrelated to the SNC-Lavalin affair for moving Wilson-Raybould out of the prestigious Justice portfolio earlier this year — a cabinet shuffle that touched off a full-blown political crisis for the governing Liberals.

Wilson-Raybould has said she believes she was moved to Veterans Affairs as punishment for refusing to intervene to stop a criminal prosecution of the Montreal engineering giant on bribery charges related to contracts in Libya. Trudeau has denied the SNC matter had anything to do with the decision.

She resigned a month later amid allegations she was improperly pressured by the Prime Minister’s Office to interfere in the SNC-Lavalin case, triggering a furor that has engulfed the Trudeau government ever since.

The issue, the sources say, arose after Beverley McLachlin announced in June 2017 her decision to retire that December after 28 years on the high court, including 17 as chief justice.

Her retirement meant the government would have to choose a new chief justice and find another bilingual judge from western or northern Canada to sit on the nine-member bench.

Trudeau created an independent, non-partisan advisory board, headed by former Conservative prime minister Kim Campbell, to identify qualified candidates to fill the western/northern vacancy and submit a short list of three to five names for consideration.

According to the sources, one of the names on the eventual list was Glenn Joyal, who had been appointed in 2011 by former Conservative prime minister Stephen Harper as chief justice of Manitoba’s Court of Queen’s Bench.

Wilson-Raybould then sent Trudeau a 60-plus-page memo arguing that Joyal should not only be added to the top court but should be named chief justice as well.

Only once before in Canadian history — in 1906, when Sir Wilfrid Laurier appointed his justice minister to the top judicial job — has a prime minister chosen a chief justice who was not already sitting on the Supreme Court.

After this article was published, Joyal issued a statement that criticized the sources for leaking information used in the article and neglecting to mention that he withdrew his application for personal reasons due to his wife's metastatic breast cancer.

"Regrettably, that detail was omitted from the now published media reports for which I was given no opportunity, or in one case, approximately one hour to respond to," he said in a statement to Global News. "I fear taht someone is using my previous candidacy to the Supreme Court of Canada to further an agenda unrelated to the appointment process. This is wrong."

But Wilson-Raybould’s initial pick puzzled Trudeau but he became disturbed after doing some research into Joyal’s views on the charter, the sources said.

Joyal had criticized the judiciary for broadly interpreting charter rights and expanding them to apply to things not explicitly mentioned in the charter or, in his view, intended by provincial premiers when they agreed to enshrine a charter in the Constitution.

The Supreme Court’s liberal interpretation has led to things like legalization of same-sex marriage, the right of women to choose to have an abortion and the legalization of medical assistance in dying, among other things ­— developments Trudeau has celebrated.

In a January 2017 speech to the Canadian Constitution Foundation’s Law and Freedom Conference, Joyal echoed conservative arguments that the top court has usurped the supremacy of elected legislatures to determine social policy.

The charter, Joyal argued, was the result of a compromise between Pierre Trudeau and premiers, most of whom had originally opposed inclusion of a charter in the Constitution. The compromise was intended to maintain a balance between the judiciary and the legislative branch of government, with provisions allowing governments to limit or override rights altogether in some circumstances.

Since then, judicial interpretation of the charter has ignored the intentions of the drafters and "led without question to a level of judicial potency that was not anticipated back in 1982," Joyal said in the speech, a video of which is available on the foundation's website. That, in turn, has resulted in a "less potent and less influential legislative branch that seldom has the final word."

"With the 'constitutionalizing' of more and more political and social issues into fundamental rights, the Canadian judiciary has all but removed those issues, in a fairly permanent way, from the realm of future civic engagement and future political debate," he said.

Joyal was particularly critical of the Supreme Court’s interpretation of section 7 of the charter ­— the section which guarantees everyone the right to life, liberty and security of the person and under which the top court struck down Canada’s abortion law and the prohibition on medically assisted death.

The court’s liberal interpretation of that section "has become, particularly in recent years, the single most fertile source for the discovery of new rights and the de facto constitutionalization of political and social issues," he said.

Trudeau rejected Wilson-Raybould’s advice. He ended up appointing Sheila Martin, a judge on the appeal courts of Alberta, Northwest Territories and Nunavut, to fill the vacant western Canadian seat on the bench. Sitting Supreme Court Justice Richard Wagner was elevated to the role of chief justice.

Jane Philpott quit the cabinet earlier this month in solidarity with Wilson-Raybould, saying she no longer had confidence in the government’s handling of the SNC-Lavalin affair.