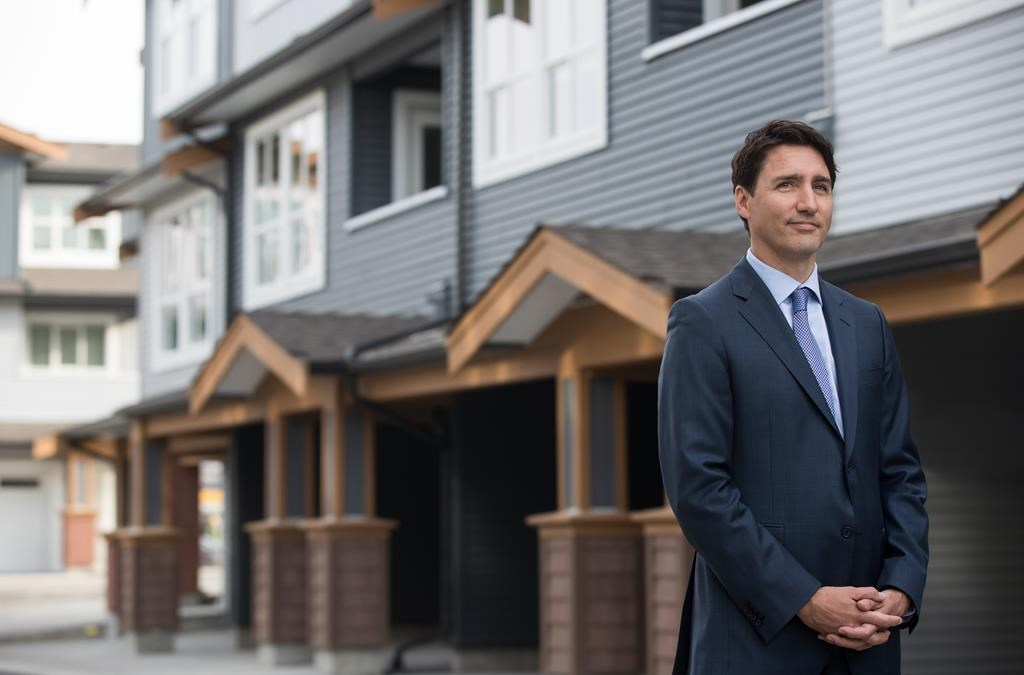 Prime Minister Justin Trudeau listens while being introduced before a post-budget housing announcement at a townhouse development in Maple Ridge, B.C., on Monday, March 25, 2019. Photo by The Canadian Press/Darryl Dyck
Previous story
Next story

Prime Minister Justin Trudeau touted efforts by the Liberal government to help first-time homebuyers put more down on their mortgages during a visit to a region of the country Monday that is facing a housing squeeze.

In its budget last week, the government introduced measures that would allow Ottawa to pick up a portion of new homebuyers' mortgage costs and it increased the amount they can borrow from their retirement savings for a down payment.

Housing has emerged as a major issue for many Canadians, especially young people who are trying to get into the real-estate market at a time when prices are soaring in some major cities.

During a visit to Maple Ridge, B.C., Trudeau said the budget contains measures to help first-time buyers by allowing them to withdraw $35,000 from their RRSPs, up from $25,000, to help lower their borrowing costs.

It also brings in a means-tested incentive that would see the government pick up part of the costs of the mortgages of those eligible for the program to lower their monthly payments.

Trudeau said housing is also a concern for parents who are worried their adult children won't be able to live in the neighbourhoods where they grew up.

"Owning a house is a big achievement. It's where you raise a family and set down roots. But far too many young people are worried that they won't be able to reach that dream. Housing prices in the Lower Mainland are some of the highest in the country and rising."

Trudeau said the government has also tried to spur new building and keep prices from rising through its national housing strategy to help increase supply.

"We just can't treat the symptoms of sky-high housing prices," he added. "We have to deal with the causes as well. When there aren't enough properties on the market, more people are competing for the same places, which forces the costs up for buyers and renters."

Last Tuesday's budget also included $10 billion more for a program to fund the construction of new rental units — the third time the Liberals have expanded the program, which aims to create 42,500 units over 10 years and now carries a $50-billion price tag.

As well, Trudeau said Ottawa is helping the Canada Revenue Agency go after tax fraud and money laundering, which have also been blamed for driving up housing prices in British Columbia.

Trudeau later visited Vancouver Island where a byelection has been set for May 6 in the riding of Nanaimo-Ladysmith. The prime minister strolled Nanaimo's harbourfront with Liberal candidate Michelle Corfield, stopping to shake hands and speak with people as they went.

The byelection was called after New Democrat Sheila Malcolmson stepped down from her seat in the House of Commons to successfully run for a seat in the provincial legislature.

Bob Chamberlin, a long-serving chief councillor of a First Nation based on Gilford Island in the Broughton Archipelago off northeastern Vancouver Island, has said he intends to seek the NDP candidacy in Nanaimo-Ladysmith.

Paul Manly, a researcher, filmmaker and communications specialist, is running for the Green party. He finished fourth in the riding in the 2015 general election, earning almost 20 per cent of the vote.

The Conservatives have selected financial manager John Hirst to run in the riding while Jennifer Clarke, who lost the nomination to Hirst, will represent the new People's Party of Canada, led by Quebec MP Maxime Bernier.

Trudeau calls May 6 byelection for B.C. riding of Nanaimo-Ladysmith

No one measure will fix B.C. housing crisis, but budget will start: ministers