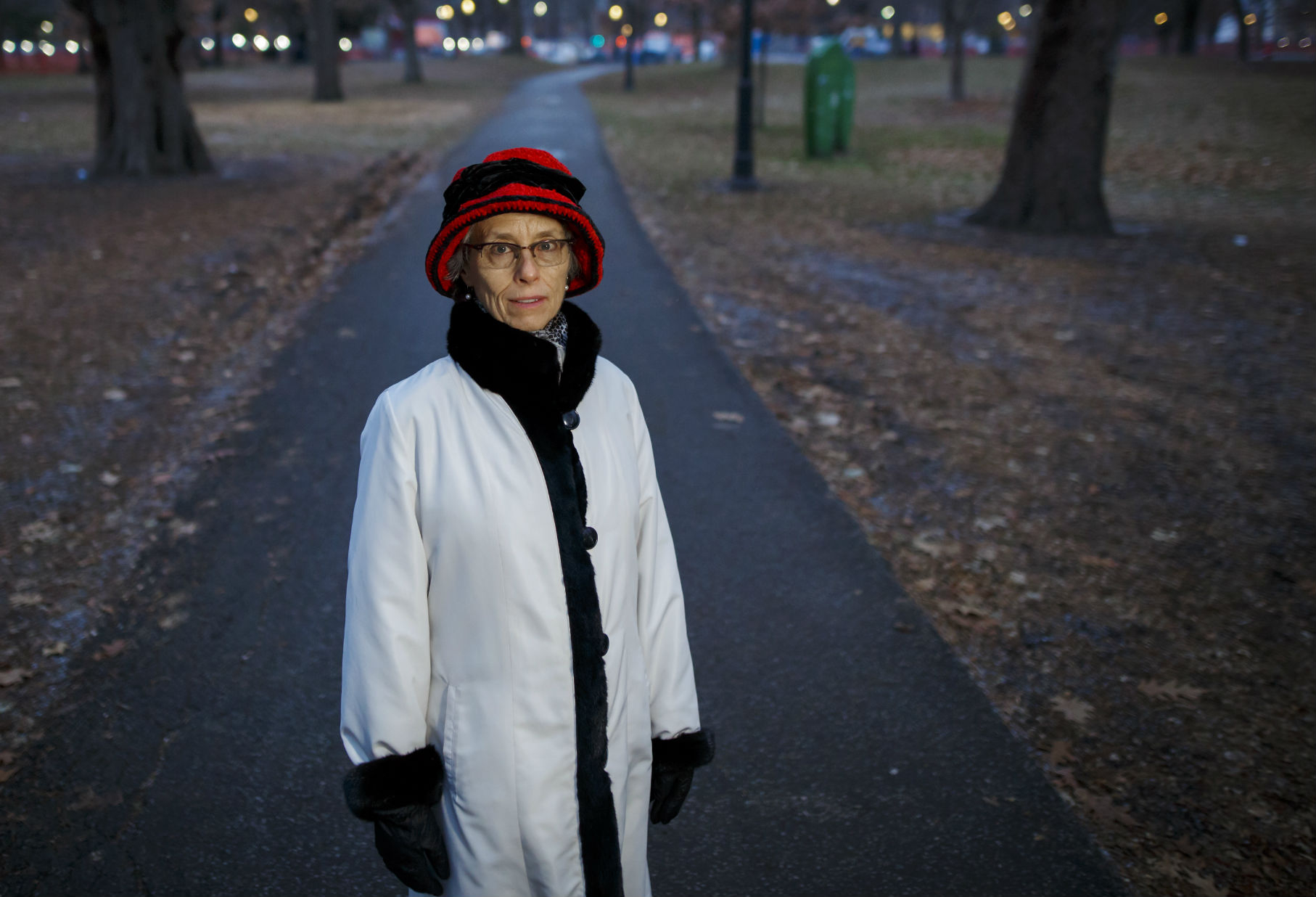 Ontario’s last independent environment commissioner will pack up her Bay Street office on Friday and leave to start a small business focused on climate advocacy.

Forced out along with two other watchdogs by Doug Ford’s spending cuts, Dianne Saxe is not leaving quietly. She was in the provincial legislature Wednesday to deliver a final report about the state of energy conservation and climate policies in Ontario. She was blunt: “very frightening” and “very inadequate.”

The Progressive Conservative government is increasing energy bills, air pollution and greenhouse gas emissions through policies that promote the use of fossil fuels, Saxe told reporters.

Her final report is titled A healthy, happy, prosperous Ontario: Why we need more energy conservation. It says that the economy in Canada's most populous province relies on fossil fuels for 75 per cent of its energy, which results in a "hefty" health, economic and environmental price tag. This cost could increase as the government works to increase the urban sprawl in the Greater Toronto Area and cut costs, the report notes.

Under the previous Liberal government, Saxe said that the government spent up to $24 billion each year to import fossil fuels such as oil, petroleum products and natural gas, between 2010 to 2015.

"If we were even 10 per cent more efficient, Ontarians could save from $1.6 billion to $2 billion every year," Saxe said.

Why do we need #EnergyConservation for economy, climate and health? Read what I told the Ontario Legislature today #onpolihttps://t.co/V76zpfEIq5

The decision was made with little evidence provided by the government, Saxe noted. A spokesman for Energy Minister Greg Rickford told National Observer last week that the decision had no bearing on climate change action in Ontario, stating:

“Ontario’s electricity system is 95 per cent emissions free. With an electricity system that’s so clean, cleaner than California, or Germany – changes to conservation programs have little to no effect on the environment. It’s actually something Ontario should be proud of, thanks to our reliance on Nuclear.”

The spokesman’s statement was false. Saxe’s report noted that Ontario only has a surplus supply of electricity during the months Ontarians don’t use much electricity (i.e. spring).

Saxe also noted that when the Pickering Nuclear Plant, which produces 15 per cent of the province’s power, shuts down in 2024, there would be a greater strain on Ontario’s electricity supply, which could only be avoided by conservation .

She painted a dire picture of what happens in Ontario without a focused energy conservation public policy. There will be “fewer incentives, fewer assistance, less awareness” for people to conserve energy, Saxe said. That means Ontarians will use more electricity and consume more natural gas. That means more costs for businesses that will have to “keep wasting money on wasting energy.” It also means more money for the province to import fossil fuels, which in turn means much more pollution.

“It means cutting off our nose to save our face,” Saxe said matter-of-factly, noting that the government has yet to release the emissions data for Ontario in 2017.

The energy conservation report notes that “fossil fuels have an unfair advantage: their price does not reflect their damage to the environment, the climate and public health, and they are heavily subsidized. Because the prices of fossil fuels are artificially low, energy conservation of these fuels (and switching to other fuels) is less financially attractive to customers than it should be.”

"Ontario is moving in the wrong direction."

Dianne Saxe is presenting her "last report as Environmental Comissioner of Ontario" on energy conservation. She takes shots at the Ford gov't for axing all conservation programs last week: "The govt's environment plan doesn't even mention electricity conservation." #onpoli pic.twitter.com/c6OEvhLy8l

Since being elected last June, the Ford government has cancelled the province’s cap-and-trade alliance with Quebec and California, which brought in almost $2 billion annually for environmental and emissions-reduction programs such as electric car subsidies and retrofits for 25,216 homes.

Ford scrapped it to fulfil his campaign promise to cut the “job-killing tax” and reduce gas prices. His government is spending $30 million in legal fees to fight the federal carbon tax, which takes effect Monday.

Ford also cancelled 751 clean energy contracts soon after coming to power. The Independent Electricity System Operator, a Crown corporation, then warned that Ontario would not have enough power at peak times by 2023.

"Conservation helps keep the lights on when the weather is very hot or very cold, times when our electrical grid strains to assure everyone a reliable electricity supply," Saxe said, noting that the current conservation policies expires in 2020.

The government’s emphasis on cutting costs is the kind of ideology that has led the world to “climate catastrophe,” Saxe said.

Saxe noted that while the Ford government’s climate plan did aim to expand natural gas conservation, their decisions so far counteract any positive impact this policy would have. The government’s goal to reach Paris Agreement targets to reduce emissions by 30 per cent are calculated on a baseline of electricity sector emissions that no longer hold true after the cancellation of the cap and trade program and 751 green energy programs.

Environment Minister Rod Phillips told reporters Wednesday that “most of Ontario’s electricity comes from green sources, whether its nuclear or renewables or hydro.” Phillips said the government was “absolutely committed” to reaching the Paris targets of reducing emissions by 30 per cent, without offering any additional evidence as to how they would do so in the face of reduced climate policies.

“The focus of our conservation is on things that are quite efficient and effective,” he said.

Rickford also said that “Conservation programs cost about $2 for every dollar they save.” Saxe’s report disagrees with this claim, noting that these programs produce “several dollars of savings for every dollar spent.”

Over 94% of our electricity is produced emissions free. By uploading these conservation programs to the provincial level, we are cutting waste and duplication. This change will end up to a $150M in bonus payments to local distribution companies that do nothing to help Ontarians. pic.twitter.com/BLY4ECPFzm

Schreiner said that Saxe’s report gave them much needed evidence that was missing from the government’s climate policies from the beginning. “I’ve asked them for evidence that back up the decision they made, and they can’t offer it,” he told reporters Wednesday. “(Saxe’s) office provides us with evidence and facts to make those decisions.”

Liberal MPP Nathalie Des Rosiers agreed that without the environmental commissioner’s office, the government won’t have the onus to make numbers readily available. “They can sit on them, hide them or they can just not calculate the impact on climate change,” she said in an interview.

The broad cancellation of energy conservation programs is moving the province "in the wrong way,” she said. “They could be improved, they could be tweaked, but to abolish them at a time when conservation is so important seems to be backwards and shortsighted.”

The environment will 'now have a stronger voice,' says Ontario auditor general

Saxe’s position — which has existed in the province for 25 years — was scrapped along with those of the provincial children’s advocate and the French-language rights commissioner as part of Ford’s cuts in last November’s fall economic statement.

Her duties will now be folded into the auditor general’s mandate.

“This is a proud, but sad day,” Saxe told reporters Wednesday.

“On Monday, my office will be eliminated. The auditor general may, if she chooses, carry on part of my work from her own point of view,” she said. “In light of her very different expertise, experience, and interests, I wish her well.”

Saxe said that closing her office eliminated 12 jobs out of the 29 that worked there, despite Ford’s pledge in May 2018 that “under our government, not a single person will lose their job.”

In response to questions from reporters, Saxe said that she was unable to find "common ground” with Auditor General Bonnie Lysyk on “climate science and climate policy” to continue on in her role. She added that she believes that Lysyk will not be "an advocate for the environment" the way she was.

Lysk told National Observer that “it was probably for the best” that Saxe did not continue as environmental commissioner in the auditor general’s office because they are not “an advocacy office” and “can’t be seen as taking sides on government policy.”

“We don’t comment on government policy, and I know (Saxe) does,” Lysyk said. For example, she said if the government implemented cap and trade or a carbon tax, her office would examine the way they are enforced. “But we wouldn’t argue one’s better than the other, whereas I think (Saxe) would advocate for cap and trade.”

Lysyk said all the technical staff from the environmental commissioner’s office are “really happy” to join her office and will have “an opportunity to touch on the broader public sector” and get more attention for their reports.

She said they will follow the federal and Quebec structure, where the environment commissioner is part of the auditor general’s office.

In her 2016 annual report, Lysyk urged the government to show the estimated cap-and-trade costs on monthly natural gas bills, and commissioned a public-opinion poll — at taxpayers’ expense — to see if Ontarians wanted to be reminded of such a charge.

Lysyk has also previously said that she wanted the Ontario Energy Board, an independent regulator, to reverse a decision that such disclosure was unnecessary.

The reason the world is facing climate catastrophe is because “we tend to put money first,” Saxe told reporters Wednesday. The auditor general’s job is to assess how the government is performing on policies.

But Lysyk said the auditor general’s work goes beyond money and comment on “implementation” and “compliance of legislation.” They would recommend best environmental practices but “won’t push forward that something must be done because the government is the elected representative.”

The environment will “now have a stronger voice,” Lysyk said. “Our mandate allows for more commentary on environmental matters in the broader public sector. The reports that we write will get more attention...the staff in the office will get easier access to information because we have broader access than the environment commissioner.”

The auditor general’s staff will also have more opportunity to work in the field to see what’s happening in the province, she added. They will go through “intensive training” next week, she said. A headhunter has been hired to find a new environmental commissioner, who will be appointed before this summer.

Climate change “is serious,” Lysyk said. “Everybody needs to pay attention to it and make sure we protect our environment and that things don’t get worse.”

But, Saxe says she is worried that if Ontario continues on its track record with the climate, it could contribute to the end of the Paris Accord, and there will be no one to keep them in check.

If that happens, she says, “we are toasted, roasted and grilled.”

Technically, energy usage will indeed go down, including per capita usage. As salaries remain stagnant and energy rates skyrocket along with other costs, people won't be able to consume as much anymore. It's just the third-world standard at work.