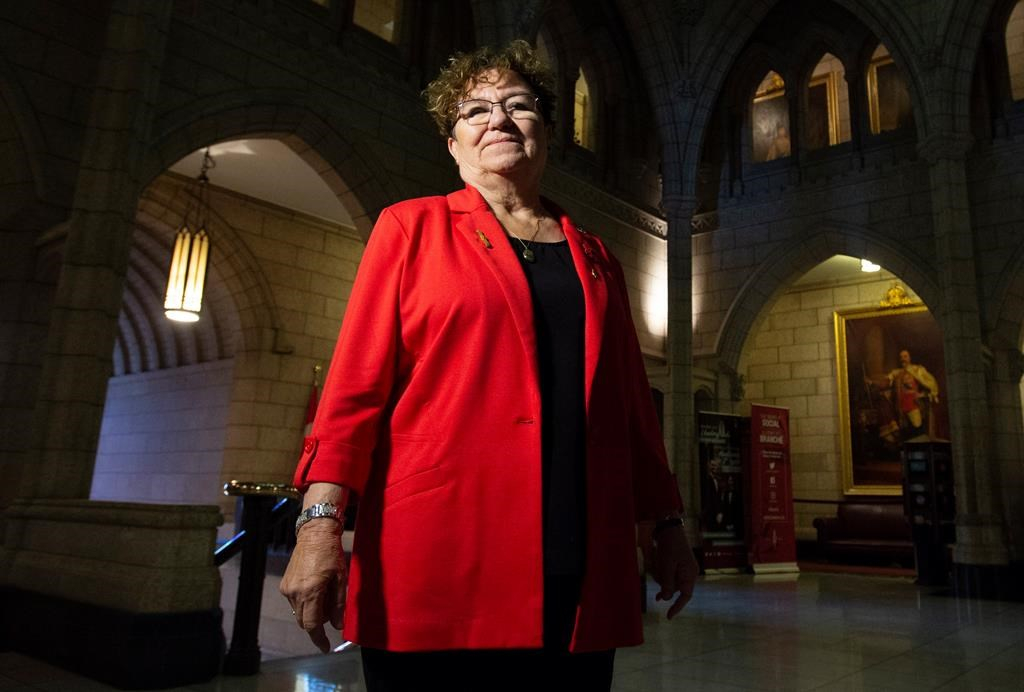 Senator Yvonne Boyer poses for a photo in the foyer of the Senate on Parliament Hill in Ottawa, on Tuesday, October 23, 2018. File photo by The Canadian Press/Adrian Wyld
Previous story
Next story

The Saskatchewan Health Authority is investigating a new complaint from an Indigenous woman who alleges she was coerced into sterilization after giving birth.

The health authority confirmed the investigation is underway after the woman's lawyer, Alisa Lombard, spoke before the Senate committee on human rights in Ottawa on Wednesday.

"She wished to have more children but was nonetheless sterilized immediately upon her newborn baby entering the world," said Lombard, who is leading a proposed class-action lawsuit by Indigenous women who allege they were coerced into sterilizations in Saskatchewan.

Lombard said her 30-year-old client, whom she referred to as D.D.S, was to have a caesarian section to deliver her third child at the Moose Jaw hospital in December.

Lombard said the woman wanted more children and had never talked about tubal ligation until her doctor demanded she sign a consent form moments before her epidural.

"She believed she had no choice but to sign," Lombard said. "She knew nothing of the risks, nothing of the consequences and nothing of the other birth control options available to her because the doctor never disclosed them."

The former Saskatoon Health Authority publicly apologized in 2017 after Indigenous women came forward to say they were coerced into tubal ligations. The proposed class-action lawsuit was filed after the initial allegations. Last fall, the law firm leading the case said 100 women had come forward alleging they were forcibly sterilized.

Sen. Yvonne Boyer, who proposed the Senate committee study the allegations, said she found it "absolutely shocking that we are still having sterilizations performed without consent in Canada."

Prior to her appointment to the Senate, Boyer and Metis physician Dr. Judith Bartlett conducted an external review of complaints about coerced tubal ligations in the Saskatoon Health Region.

Their report suggested there be improvements to how consent is obtained and a provincial policy related to tubal ligation. Previously, care providers could get consent right after a woman gave birth. The health authority says now there must be a documented discussion about tubal ligations between a woman and her health-care provider before she comes to the hospital.

"Work is nearing completion to ensure that all providers across the province are not discussing the option of tubal ligation during the labour experience. For those women who have asked for a tubal ligation to occur with their pre-booked C-sections, there will be a double check to ensure informed consent is in place," the authority said in a statement Wednesday.

The head of the RCMP said earlier this week that a preliminary review hadn't identified any complaint about coerced sterilizations made to law enforcement agencies in the country. However, Lombard told the Senate committee that one of her clients had made a formal complaint to a police department last spring.

The lawyer has said that her clients would like to see a ban on coerced sterilization. She urged the committee to keep the women's stories and voices forefront as it studies the issue.

"D.D.S was sterilized without proper and informed consent after the United Nations committee against torture issued its recommendations to Canada and over a year after a statement of claim was filed in this matter," Lombard said.

"D.D.S's forced sterilization was foreseeable and it was preventable."

Upgrading procedures is all

Upgrading procedures is all very nice and needs to happen. But this is obviously deeply unethical, it's not like you should need a procedure to know that. Really, there are a fair number of crimes on the books which are less nasty than this--how is this not a bigger, more intimate assault than punching someone in the mouth? How about some penalties for unscrupulous racist doctors?