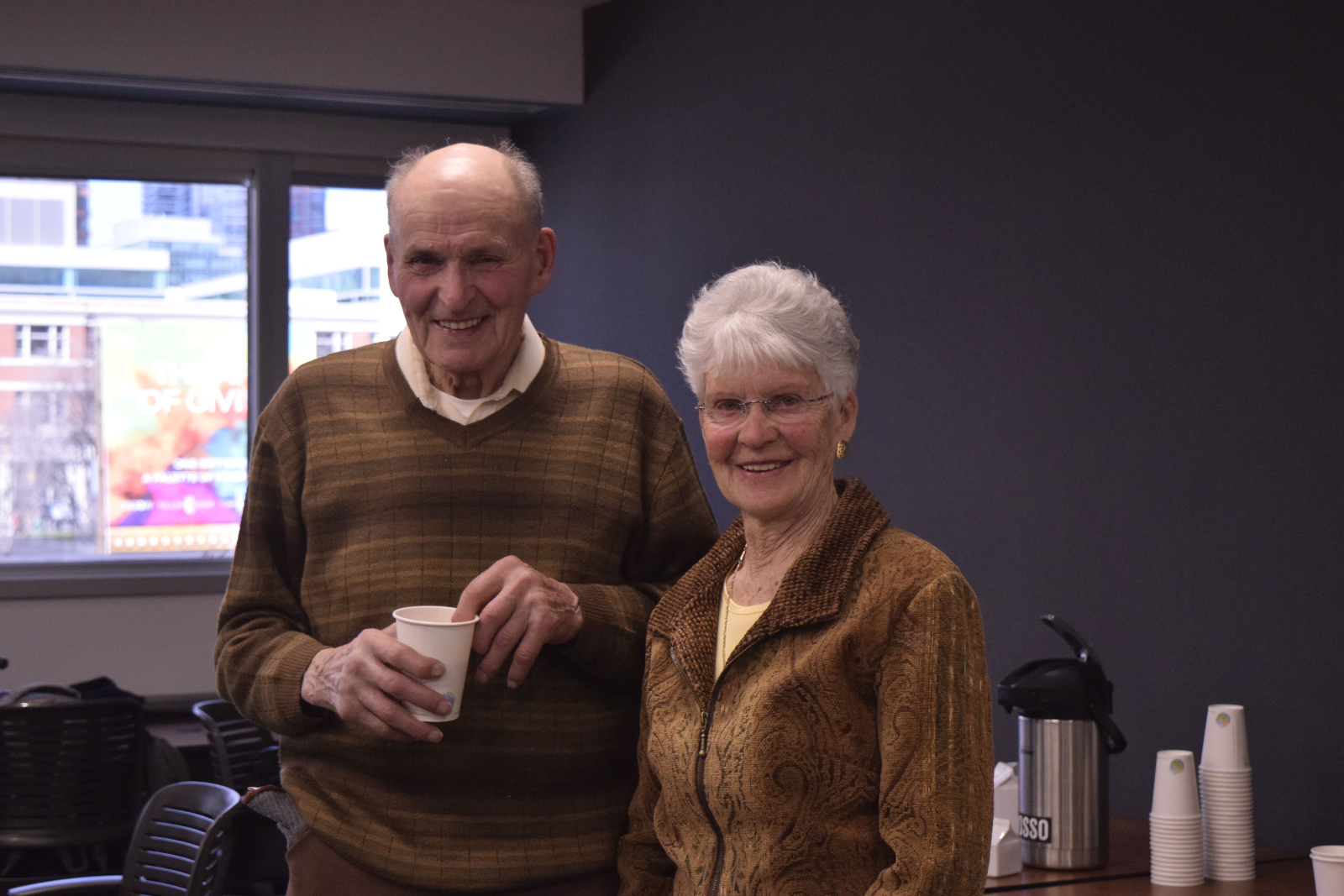 Shirley and Herman Dorin want to see compensation for their 42 years of frustration with oil companies. Calgary, April 8, 2019. Photo by Alannah Page
Previous story
Next story

Herman and Shirley Dorin never wanted the oil well on their farm in rural Alberta in the first place. Now it's leaking gas. They're elderly and unwell. And they've spent a fortune in court trying to get some justice.

In 1977, an oil company now owned by WhiteCap Resources Inc. drilled an oil well near Shirley’s garden in the middle of the Dorins’ farmyard near Lethbridge. The family objected to the well but their complaints fell on deaf ears.

“We’ve been objecting since the thing was built,” says Herman Dorin who estimates that they have spent near $1 million on legal fees challenging the placement of the well on the land, the lack of compensation for use of the land and for health damages.

“We had the initial payment when they came on the property but we’ve never had an annual payment,” Shirley, 86, said in an interview with National Observer. Nor did the couple get an oil company hearing every five years as expected because they never received the yearly sum.

They spoke as researchers with the Alberta Liability Disclosure Project (ALDP) on Monday said at a news conference in Calgary that oilfield cleanup should be an important issue in the Alberta election campaign.

Landowners 'left in the dark'

They discussed official underestimates by the Alberta Energy Regulator (AER) of the costs of Alberta oil and gas well cleanup and how landowners are “left in the dark” about wells abandoned on their land.

“The Alberta Energy Regulator hasn’t come clean on how much it will actually cost to deal with this mess, but our new data raises the floor of the debate,” said Regan Boychuk, lead researcher for the ALDP. “We need the government to tell Albertans the truth, so we can make a plan to deal with this ticking time bomb.”

An independent report by the ALDP estimates the cost of cleaning up Alberta’s 300,000 plus unreclaimed oil and gas wells will be between $40 and 70 billion — two to 3.5 times higher than the $18.5 billion the AER has told Albertans.

National Observer, Global News and the Toronto Star reported in November that a high-ranking AER official said privately that cleanup of Alberta's fossil fuel industry could cost an estimated $260 billion. That number was provided to a private audience in Calgary last year. The liabilities include costs that companies must assume to shut down aging and inactive oil and gas exploration wells, facilities and pipelines once they are no longer needed. Another significant part of the liability is the clean-up of toxic tailings ponds from oilsands extraction mines near Fort McMurrray.

The Dorins blame their health complications on gas leaks from the well. Shirley was diagnosed with Parkinson's three years ago and Herman suffers with a mild bipolar disorder.

“That affected our children and our marriage and I think it’s amazing we’re going to be married for 65 years this fall,” said Shirley, referring to Herman’s health problems.

“My son is determined to get justice before we die.”

With their son Mark’s help, the Dorins discovered that the well which they thought was shut down was actually still operating and leaking gas into the air.

“The flare is supposed to be lit at all times but it was not and it was expending gas,” Shirley said.

“[Herman] would get up at night and it wouldn’t be lit … so he’d go and light the flare.”

The Dorins would like a resolution to their well problem so that a precedent is set for other landowners to follow.

“I would like a hearing and to be compensated for the years of frustration. I would also like for there to be more openness with landowners because there are lots of people who have had problems,” she said.

The ALDP cost estimate is two to three times more than the public was initially aware.

Boychuk said landowners are left in the dark about wells on their property because of a subsidy implemented by the AER in 2015 that allowed companies to say there was no production tubing or pump rods down a well -- meaning the well was shutdown.

This subsidy meant that oil and gas companies could hold off on paying the $10,000 to $20,000 cost of permanently plugging or shutting down a well.

The Dorins don’t know why their well wasn’t properly shut down and were never contacted by the oil company to explain what happened.

With the Alberta provincial election next week, the ALDP is calling on all party leaders to make cleaning up the oilfields a priority.

Call for transparency by government and industry

All party leaders were invited to Monday’s press conference but the only representative present was Liberal leader David Khan.

“The liabilities could be as high as $260 billion or more to reclaim our oil and gas infrastructure and no other party is talking about this,” Khan said in an interview .

Khan also said that his party filled an emergency debate request to the legislature last fall but it was shut down by all of the other parties on grounds it wasn’t an “urgent issue”.

Currently, the provincial government is holding $200 million as a deposit from energy companies for oilfield cleanup. However according to ALDP, that is less than 0.3 per cent of a total cleanup cost.

Boychuk and the Dorins say someone needs to take responsibility for the cleanup and the first step is transparency by the Alberta government and industry leaders.

“We don’t have a say in any solutions … this illustrates a need for more transparency and openness,” said Boychuk. “We could have prevented this from happening.”

As of now, the ALDP reports that no site facility that is at long-term risk to spill or leak has ever been certified as completely cleaned up in Alberta.

The AER said no one was available to comment at this time.

I wonder how many other

I wonder how many other people have been victimised by the Oil and Gas sector - everywhere in the world that it operates? Their global criminality, fraudulant policies and practices have gone unpenalized, just as the slave owners of yore operated with impunity.

The Fossil Fuel sector have been the slave owners of our own times - except that we, ordinary people, have been enslaved by the illusion of "cheap energy" and the miracle of petro based chemistry. Only now do we realize the incredible, existential, price we will pay. Even if we managed to switch to 100% clean energy before the doomsday deadline, our earth will still be dealing with the dreadful hangover of all the toxins this industry has released in its (geologically) short life span. Their legacy of poison will outlive their dubious "benefits."

Cheap gas and oil.. was what

Cheap gas and oil.. was what the people wanted? When it comes to your back yard the story is different. Time for honesty and making money to be talked about in the same group of people. Officials who have forked tongues are still roaming the planet, making us all wake up. 'We are all one' and what we do to the planet we do to each other, as the natives tried to teach white man. Gaia loves us and we have choice. 5G is the next disaster waiting to happen as they plan to keep dumbing us down. Every choice we make is a vote for what we believe in. Our money votes for the world we want. Educating oneself can not be over stated. We seem to need these experiences as our culture/soul grows into adulthood.

Even if the emissions from

Even if the emissions from this well were burned, they would not be safe for area residents. The need for transparency from the AER, industry and Government includes the danger of emissions after burning. Most flare stacks are inefficient in truly burning off toxins, and some of the compounds going to flare stacks are made worse by burning. The costs of well cleanup are just the tip of the iceberg. Costs in terms of human and animal health, water and soil contamination during the active life of wells and for years after are even higher.