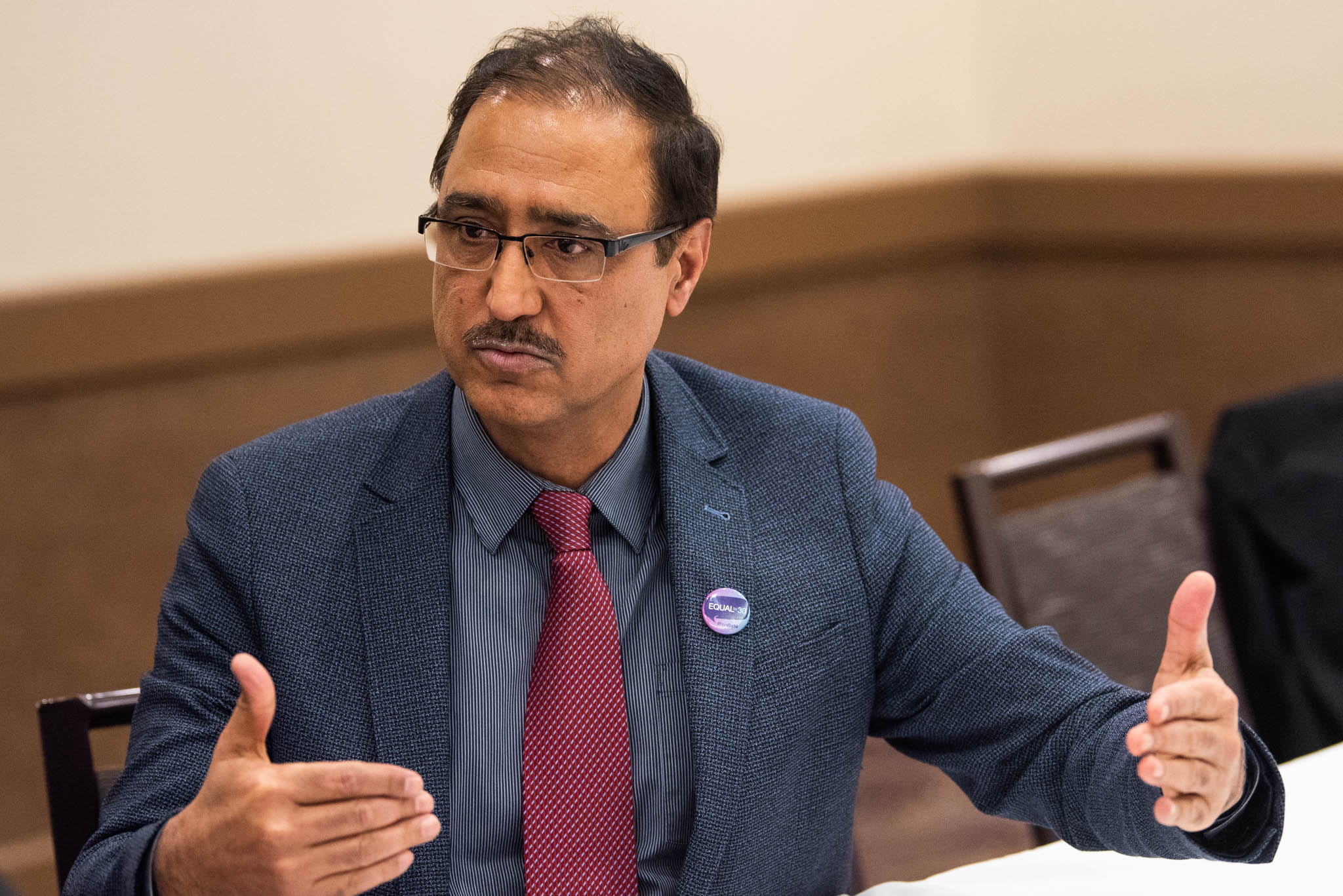 The Trudeau government says it isn’t satisfied with First Nations consultations on the Trans Mountain oil pipeline expansion project, and is pushing back its deadline to make a decision to June 18.

Natural Resources Minister Amarjeet Sohi announced the new decision date for the Trans Mountain expansion (TMX) in a statement Thursday. The project had been facing a deadline of late May, but cabinet has the power to extend the deadline under current legislation.

The new date would put the decision in the last week of the House of Commons sitting before members break for the summer and parties gear up for the fall federal election.

Just last month, Sohi had been telling the public that the government was "on track" to conclude its review and make a decision on the pipeline project. Canada’s energy regulator, the National Energy Board (NEB) had approved the project for a second time in February, after it had been halted by a Federal Court of Appeal ruling last year.

Canada now owns the existing Trans Mountain system after purchasing its assets and the rights to the expansion project from Texas energy company Kinder Morgan in 2018 for $4.5 billion.

Sohi said in March that a team of officials directed by retired Supreme Court justice Frank Iacobucci had met with over 100 Indigenous communities since the ruling, which had instructed the government to fulfill its duty to conduct meaningful consultations with First Nations.

But on Thursday, the minister said he had heard from Iacobucci and Indigenous groups and had concluded that the First Nations consultations needed more time.

“The government has consistently said that a decision would only be made on the project once we are satisfied that the duty to consult has been met. Through this process, Indigenous groups have told us that more time is needed,” said Sohi.

“To meet this obligation, to respond to what we have heard from Indigenous groups, and with advice from Federal Representative Justice Iacobucci, the Governor in Council has extended the deadline so that a decision on TMX can be made by June 18, 2019.”

The pipeline expansion project was a major issue during the Alberta election which had concluded two days earlier with a resounding victory for Opposition Leader Jason Kenney's United Conservative Party. The UCP criticized Premier Rachel Notley's NDP government throughout the campaign for striking an alliance with the Trudeau government on climate change policies.

Kenney said that her work with Ottawa has failed to deliver any significant progress on the Trans Mountain expansion.

While Notley said at the end of the campaign that she was confident the federal government would approve the project at the end of May, voters massively flocked to Kenney's UCP, giving him nearly two thirds of the seats in the Alberta legislature and a strong mandate to undo the NDP government's climate change policies.

But the premier-designate was singing a slightly different tune regarding the Trans Mountain project on Thursday, explaining that he had spoken with Trudeau and agreed after the prime minister told him the federal had legal advice urging them to spend an extra two weeks to "ensure a proper completion of Aboriginal consultation" on the review ordered by the court.

"I agreed with the prime minister that they need to make sure that they cross every 't' and dot every 'i' when it comes to discharging the federal government's duty to consult," said Kenney, after meeting with outgoing Premier Rachel Notley in Edmonton to discuss the transition, CBC News reported.

"We certainly don't want them to have to go back to the drawing board a third time on this. And we will continue on our part to build an alliance across the country that supports TMX and other pipelines.

"We will continue to communicate the urgency of this to all Canadians."

Sohi said Indigenous groups had indicated that more time was needed to "complete the Phase III consultations," referring to how the Crown consultation efforts were divided up into four phases.

The first and second phases did not involve any substantive discussion about title, rights or interests, the federal court had found. But in the third phase, the court found Canada "failed" to "engage, dialogue meaningfully and grapple with the real concerns of the Indigenous applicants" and "the duty to consult was not adequately discharged."

It was this flawed third phase that the government re-initiated after the court ruling, appointing Iacobucci to oversee new consultations with 117 Indigenous groups that are impacted by the pipeline project.

Sohi made it clear at an October, 2018 news conference that the new consultations would not follow the same timeline as the NEB. On Feb. 22, the regulator gave Ottawa 90 days to make a call. "We are going to do things differently this time," he had said in October. "We will not put a stop clock on consultations."

Conservative Party natural resources critic Shannon Stubbs said in a statement later Thursday that the delay showed the government "never had a plan to meet the 90-day deadline to make a decision" and that "the Liberals still refuse to set a deadline for these consultations."

"Despite the fact that the majority of Canadians and impacted Indigenous communities support the completion of this important project, the Liberals continue to drag their feet," she said.

“The Trans Mountain expansion was originally expected to be completed and in service by December 2019. However, the Liberals’ ongoing delays will result in another missed summer construction season, significantly delaying the completion timeline."

The Trans Mountain expansion, if built, would triple the capacity of the existing pipeline system, allowing up to 890,000 barrels of bitumen and other petroleum products to flow from Alberta to the West Coast.

Supporters say the project will benefit the Canadian economy while critics, such as First Nations and municipalities along the proposed pipeline route, point to ecological and climate risks.

One of the risks that has been raised is to the Thompson River population of steelhead trout, which spawn in the Coldwater River running through the reserve and traditional territory of the Coldwater Indian Band, a First Nation in British Columbia. Coldwater Chief Lee Spahan has said only 21 steelhead returned to the river in 2017.

The federal court ruling had explained how members of the Crown consultation team acted as “note-takers,” reporting Indigenous concerns to cabinet instead of grappling with, and responding to those concerns, which ranged from disturbing burial grounds to threatening fishing grounds.

Emma Hume, a lawyer representing Coldwater, said Thursday that the nation hadn't specifically asked for an extension to consultations. Hume said Coldwater received notice of the extension on April 17, and that the rationale given by the government did not include any mention of steelhead.

The Coldwater River runs along the proposed path of the Trans Mountain expansion, which splits from the existing pipeline route around the reserve, south of Kamloops. The route crosses the river multiple times, and crosses other rivers where steelhead live.

A panel that had formed under Canada’s federal species at risk legislation had concluded in a January 2018 assessment that steelhead were in danger, stating that populations had declined by roughly 80 per cent over two decades.

The fish should be listed as endangered under Canada’s Species at Risk Act (SARA), the panel recommended in a Feb. 13, 2018 letter to Environment and Climate Change Minister Catherine McKenna, using a power in the law allowing the government to make an emergency order.

Coldwater made a formal submission to the NEB, during its second assessment of the pipeline after the federal court ruling, that said the pipeline proponent had failed to examine what would happen to steelhead in the event of a diluted bitumen spill.

The government held public consultations last fall on the issue. Experts say a protected species listing could complicate the pipeline expansion process. The law says such an emergency order may include provisions that identify the habitat required for the species to recover and then prohibit activities on that habitat "that may adversely affect the species."

In an April 11 interview with National Observer, McKenna said she was still working with Fisheries Minister Jonathan Wilkinson on a decision whether to list steelhead as a protected species. “I’m working with the minister of fisheries and oceans on research in relation to this," she said.

“We haven’t made a decision yet.”