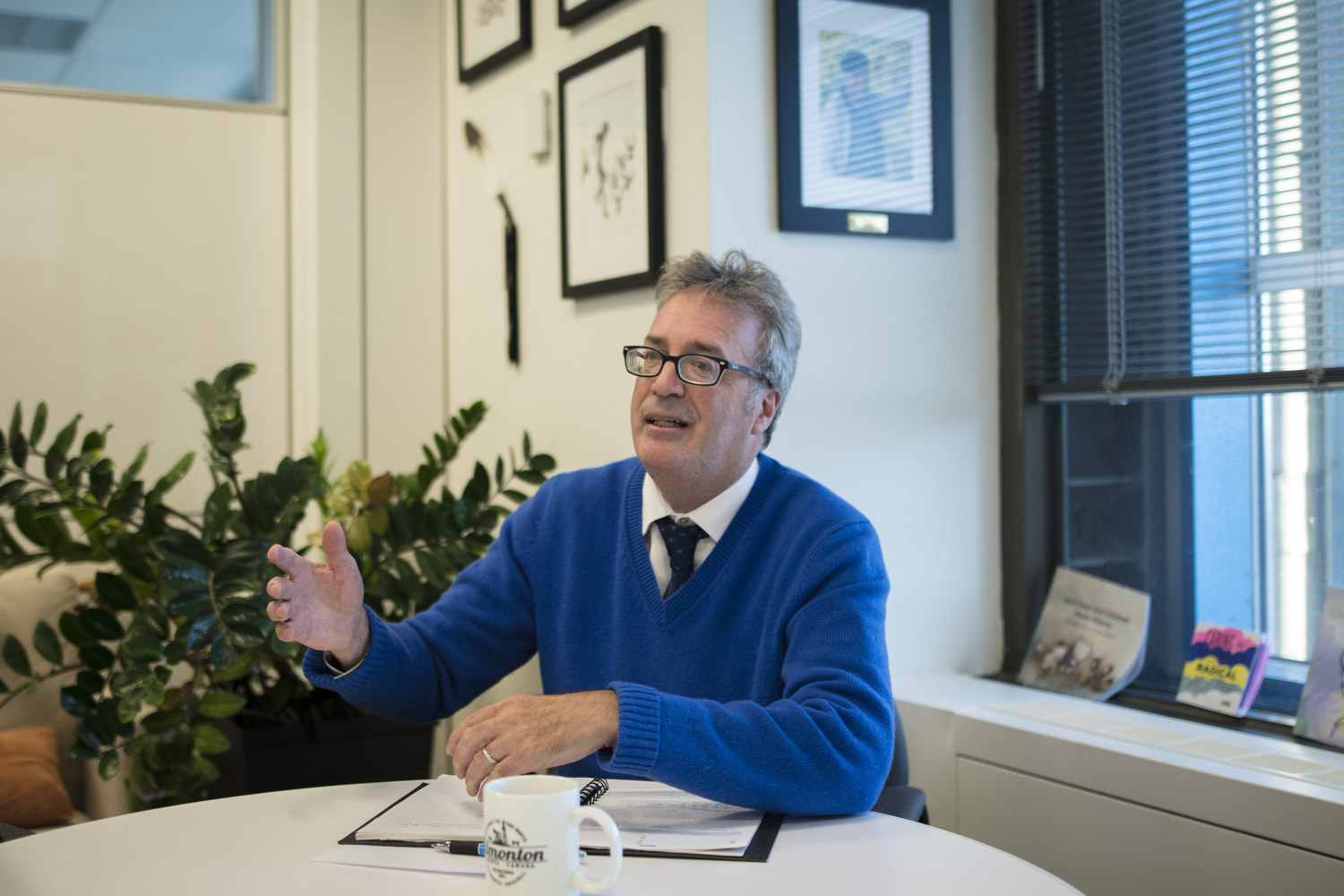 Irwin Elman, Ontario's first, only and last independent child advocate, speaks to National Observer in an interview at his Toronto office on March 26, 2018. Photo by Tijana Martin
Previous story
Next story

When Midori Nakamura was 15 she stopped believing that adults could ever help her.

An entire life spent in a childcare home in Osaka, Japan, eroded her trust, Nakamura recalls in her soft voice. At that home, attention was a luxury afforded only to toddlers and every young person automatically had to leave at age 18 to fend for themselves.

Speaking to adults about her hopes, her fears or her dreams was not an option. When she told them she wanted to go to university, she says those in charge told her that it was "impossible" and that she had "no potential."

"I didn't know I could complain," she told National Observer, speaking through a translator.

In 1999, Nakamura was among a group of Japanese children from care homes who visited Toronto in an exchange program with the Pape Adolescent Resource Centre (PARC) in Toronto for a dialogue about child advocacy — the concept of allowing a child in care to have a voice in the welfare system. To her surprise and amazement, she learned that in Toronto, young people "openly talked about their lives and complained to adults," and doing so was okay, even encouraged.

At the time, PARC was headed by a child and youth support worked named Irwin Elman, who went on to become Ontario's first and only independent provincial child and youth advocate in 2007.

Elman's role was eliminated in a single paragraph of the economic update released by Premier Doug Ford's government in November 2018.

In the course of Elman's 12-year-long tenure as the province's independent watchdog for children, he has continued his "long term relationship" with Japanese youth like Nakamura who were inspired by the strength of voice in Ontario's youth to create a stronger child welfare system in their own country.

During that time, Nakamura became the first Japanese child of care to graduate from university. On Wednesday, she was back in Toronto to visit the child advocate office, this time as a childcare worker, to further discussion on how to build the advocacy movement in Japan. Her visit occurred less than a week before the office is mandated to close. On May 1, the child advocate office's duties of investigating all matters relating to child and youth services will be transferred, in part, to the provincial ombudsman. The advocacy function will not be carried over.

Her visit highlights a consequence of the Ford government's decision to axe an independent office that served to amplify the voices of the province's most vulnerable youth.

Elman's role was eliminated in a single paragraph of the economic update released by Premier Doug Ford's government in November 2018.

"The path of my identity was formed by this office," Nakamura said, gesturing to the colourful board room on the 22nd floor of the Bay Street building. "This office empowered me. I couldn't talk to adults then but today I'm talking to politicans."

'In Ontario, children in care had a voice. I wanted that to happen in Japan'

Nakamura was visiting Toronto with two of her peers from Japan's new child advocacy movement: Marika Kikuchi, a childcare worker in Tokyo, Japan, and Satoshi Brojan, a 27-year-old youth advocate who spent eight years in a group home.

Together, they have created Our Voice Our Turn Japan — a mirror of the Our Voice Our Turn movement that the Ontario Child Advocate office first created in 2011 to organise a two-day youth-led public hearing at the provincial legislature.

In Ontario, the movement meant facilitating young people in care to speak to politicians and policymakers about their experiences and what they wanted to change in the supports and services the province provided its most vulnerable children. In May 2012, Our Voice Our Turn released a report on the hearing titled My REAL Life Book, which was presented to the legislature and written entirely by young people who offered deeply personal insights into the provincial care system and urges for change.

In Japan, the movement began officially in the summer of 2018. Kikuchi began a social media conversation that brought together some 15 young people who had left care. Together, they became youth leaders who hoped to change the future of about 45,000 children who live in Japan's care system today.

"In Ontario, there is the advocacy office, there is the system of hearing youth voices," reads the first newsletter of Our Voice Our Turn Japan, released December 2018. "Our action is so simple. We gather youth voices and bring it to the people who want to support us and make the system for youth."

Kikuchi said she had spent the last five years working in group homes, "frustrated" that she couldn't help them in the way she wanted. Kikuchi cares for approximately eight children, ranging from two to 18 years old, in a group home.

"Everything in that house is done with the kids' input," she said through a translator. "They have no system to complain, and everything is decided for them in the system."

Many of the children forced to leave at age 18 have no one to turn to, no home to go to, and no support system whatsoever, Kikuchi found.

These stories are revealed publicly for the first time in Japan's version of My REAL Life Book, where children who had left care speak about being homeless, unemployed and having no one to call for help.

"When they are in care at least they have a place to live," Kikuchi said. "When they leave, they leave without relationships....Technically, we're the only family they have. And they can't contact us."

"It's not the kids' fault they are in the system," she added. "But they have a difficult life and that is unfair."

In 2013, Kikuchi heard about the Ontario Child Advocate through a Toronto man named Koko Kikuchi (unrelated). Koko has been facilitating a dialogue about child advocacy between Ontario and Japan for two decades along with Elman. He now serves as a translator for Our Voice Our Turn Japan. He has worked with Ontario's provincial advocate office long before it was independent, serving as a researcher and translator for former child advocates since 1994.

The idea of giving Japanese youth in care a voice wasn't a new idea when Koko first introduced it to the country in the mid-1990s, but "it had never been taken seriously." Today, it's started a movement among Japanese youth.

"I was blown away by what Koko told us," Kikuchi told National Observer. "In Ontario, children in care had a voice. I wanted that to happen in Japan."

In the years since, Kikuchi and Nakamura spoken to Japanese government officials to get them to include advocacy in the childcare system. Their first success was in 2016, when Japan, like Ontario, amended its childcare laws to give children in care the right to request changes and be heard. (In Ontario, the 2011 amendments to the Provincial Advocate for Children and Youth Act allowed young people to request changes in their residential placements.)

Both young women say that official amendment came about "thanks to the Ontario child advocacy office."

"We don't know yet if we can have this kind of office," Nakamura said, gesturing around her, "but the government says we can have an advocacy program and we're talking about what it should look like. More adults are now listening."

Kikuchi was emotional when asked about the closure of the Ontario Child Advocate office.

"This office is the pride of the people in Ontario, and it is a beacon of hope for all other countries," she said, her voice breaking. "Japan is indebted to this office."

Koko, who has worked with this office in some form for 25 years, was taken aback."I never throught this would happen," he said. "In Ontario, people listen to kids. I never thought they would do ever do this, remove this."

But 27-year-old Brojan, who is visiting Toronto for the first time, was hopeful. Being in the office feels like "a miracle," he said, after the struggles of his life: Brojan was physically abused, and changed homes several times in his life. His mom passed away when he was 14 years old and since then he has grappled with suicide.

Learning about Ontario's child advocacy work has given him "a reason to live," he said, and to be "someone's trigger to change."

He described the Ontario child advocate as a "big flower that has bloomed and its seeds have been planted in Japan and started to grow."

Japan and Ontario are holding hands across the Pacific Ocean, Brojan said. "We're far apart but we're connected. What we're doing in Japan will now produce seeds for the next generation somewhere else."

"This will all bloom," he said. "By some force, or maybe my accident."

Elman was humbled by their comments, ever grateful that they were interested in and wanted to learn from Ontario.

"It just proves what I've been saying that the legacy of the work young people are doing will carry on, that what the Ontario government has done won't dim the light of our work," he said. "Young people in Japan are moving towards a model of child advocacy. They are now holding a torch for Ontario. I'm sure that light will come back to Ontario somehow when we're ready and able to rebuild."

"It's a simple thing: when you believe in children of care, its amazing what they will do with that spark," he added. The three young people from Japan are facing the impossible task of changing a culture with the idea that children can be seen and heard, Elman said. "Already, they've helped moved that country along and to feel like we've had any role in that...for them to feel like they were supported by Ontario's young people, is just incredible."